Setting up a SZA263/LTFLU voltage reference

The main key difference between the REFAMP such as SZA263 or LTFLU and more traditional LTZ1000/LTZ1000A are:

Fluke used REFAMP (Motorola SZA263 first, Linear LTFLU later) in many instruments, such as benchtop DMM, calibrators and DC Voltage Standards. Below is list of some examples. 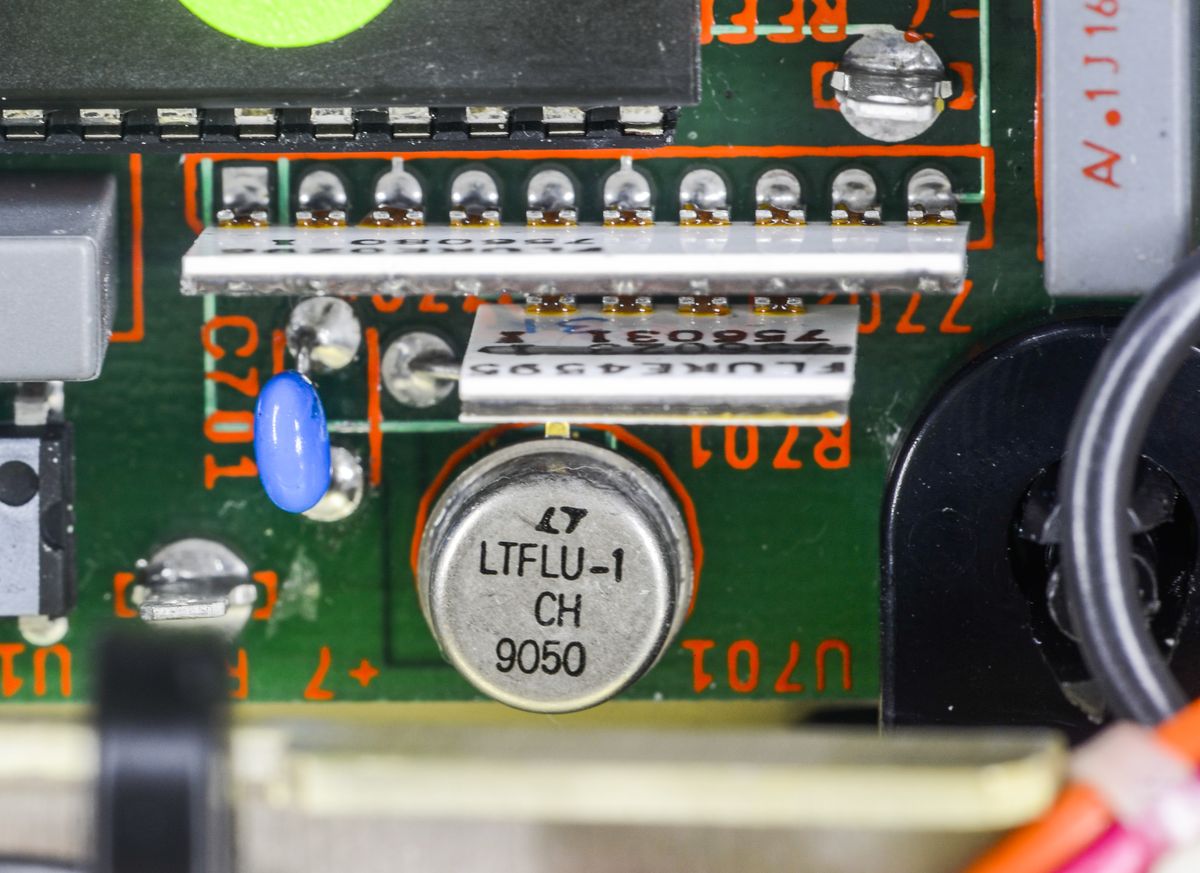 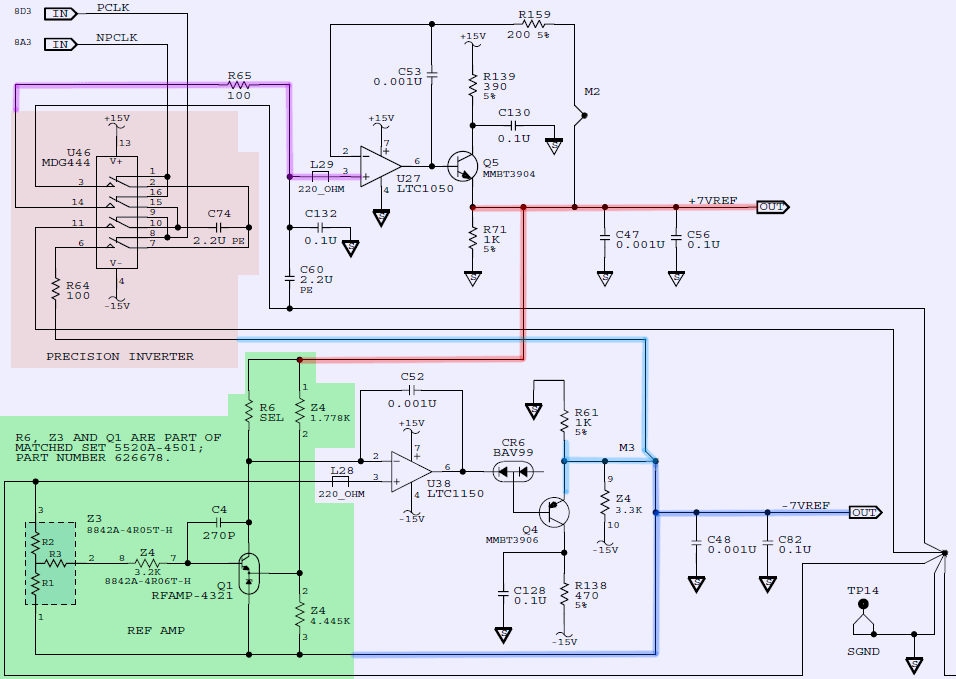 So it’s a special part, that nobody can buy from Digikey. Yes, however, there are reference modules around SZA263/LTFLU and voltage reference chips available from time to time on secondary market. Even though nobody can say for sure if they are fakes or genuine parts, sort out with bad specification or gray market production.

The specimen investigated here were sourced from Walton Electronics from Alibaba.

A tear-down of both parts revealed, that SZA263 is a two chip construction in one TO-package with separate silicon and zener diode, while LTFLU is a one chip design, both connected as a REFAMP with collector, base, emitter of the zener and anode of the silicon diode. 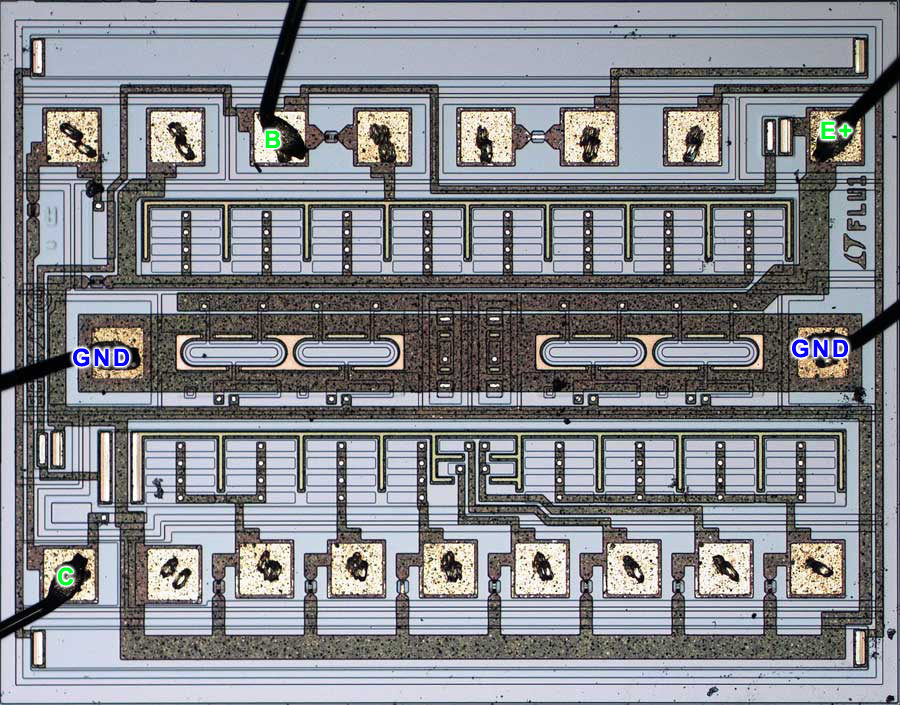 On the die photo we can see much more complex design than just diode and transistor. Different to Linear LTZ1000 which needs a separate stage to boost the zener voltage to 10V, the boost of the output on these REFAMPs is part of the zener circuit itself, realized in a bootstrap fashion. However, a 10V output requires an individually trimmed voltage divider for each device from the output to the base of the REFAMP. As found earlier the TC(Thermal Coefficient) of this divider is rather critical, as it is only dampened by a factor of ~3, while all other resistors of the circuit are less critical and their TC(Thermal Coefficient) is dampened by a factor of 150 … 500.

The typical zener current is IZ=3mA, with the zener voltage varying between VC = 6.8 … 7 V. Operation of this REFAMP-based voltage reference without an oven but somewhat optimized value for R13 can lead to a temperature behavior of less than 1 ppm/°C over 10..45°C, with a parabolic shape of the TC(Thermal coefficient) curve. However, for best performance the REFAMP should be ovenized to achieve 0ppm/°C. To set the zero TC(Thermal coefficient) for a given temperature the value of R13 needs to be determined, while the range for the current through it is IC = 20 … 200 µA.

This article addresses the findings so far, even though no datasheet is available. Fortunately, circuit diagrams of a lot of Fluke gear can be found using these refamps, which gives a starting point.

Circuit design and theory of operation 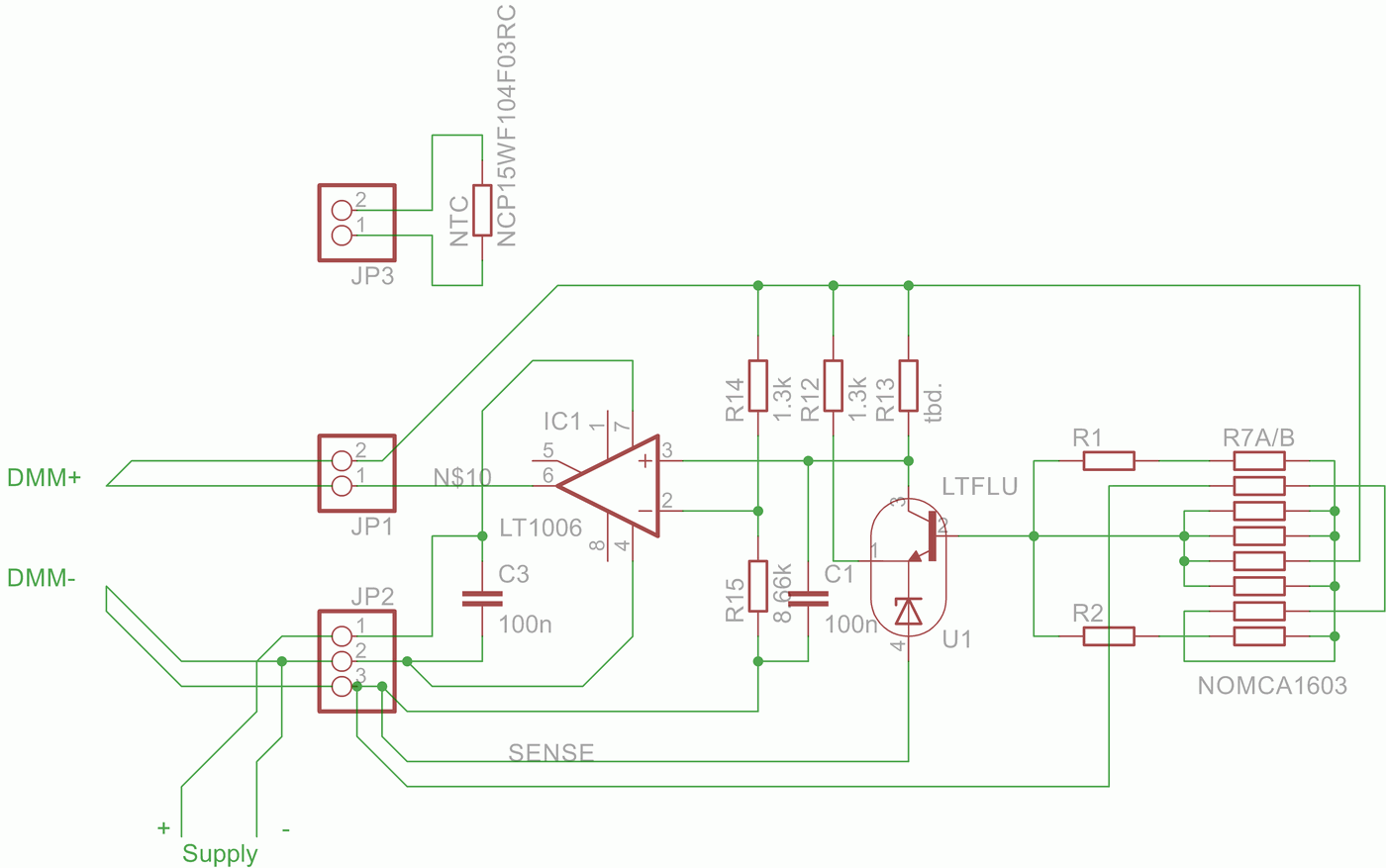 The goal is to build a battery powered, ovenized single supply 10V voltage reference based on LTFLU1-CH, similar to LTZ1047B designed by Andreas Jahn, a LTZ1000 based portable voltage reference. The oven is planed to use a ceramic or aluminum core substrate mounted on a thick-film resistor.

Pre-regulation shall be done by LDO LT1763 supplied by a battery pack of 12× 1,2V Eneloop, a total of 14,4V. Based on circuits available a schematic as shown in Figure 1 was designed. Therefore a single supply op-amp LT1006 (or OPA189, ADA4522-1) comes into play. As for the critical resistor divider R7A/B a NOMCA16035001 is used with additional resistors (R1 and R2) being integrated into the divider to trim the output voltage to 10.00000V and to reduce their influence.

The oven temperature is planed to be +45…+50 °C, which should be enough headroom even in summer. A NTC mounted to the reference board serves as a temperature sensor for the oven. NCP15 series by Murata is said to have good long-term stability, thus it is used here. Zero TC(Thermal Coefficient) temperature has to be found within the desired temperature range by adjusting R13 value respectively. To do so a breadboard was used with R7A/B pretrimmed for a nominal 10V output voltage by arranging the NOMCA resistor network to R7A = 5 kΩ and R7B = 11 kΩ. This is necessary, as the output voltage also influences the current through a given R13.

Measurements of temperature profile inside a temperature chamber while varying R13 with a decade resistor box gave the following values for the zero TC(Thermal Coefficient) temperature: 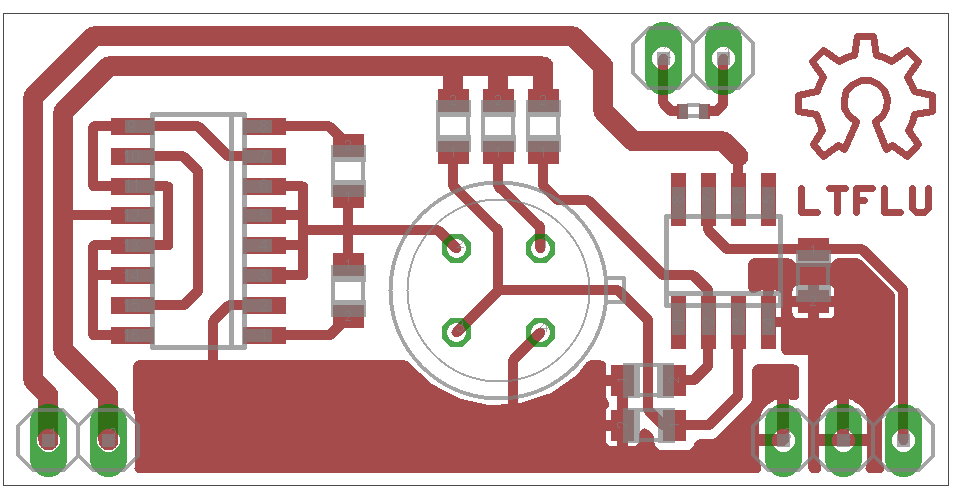 Typical resistor values used for one of the first modules are shown on Figure 4 for reference. 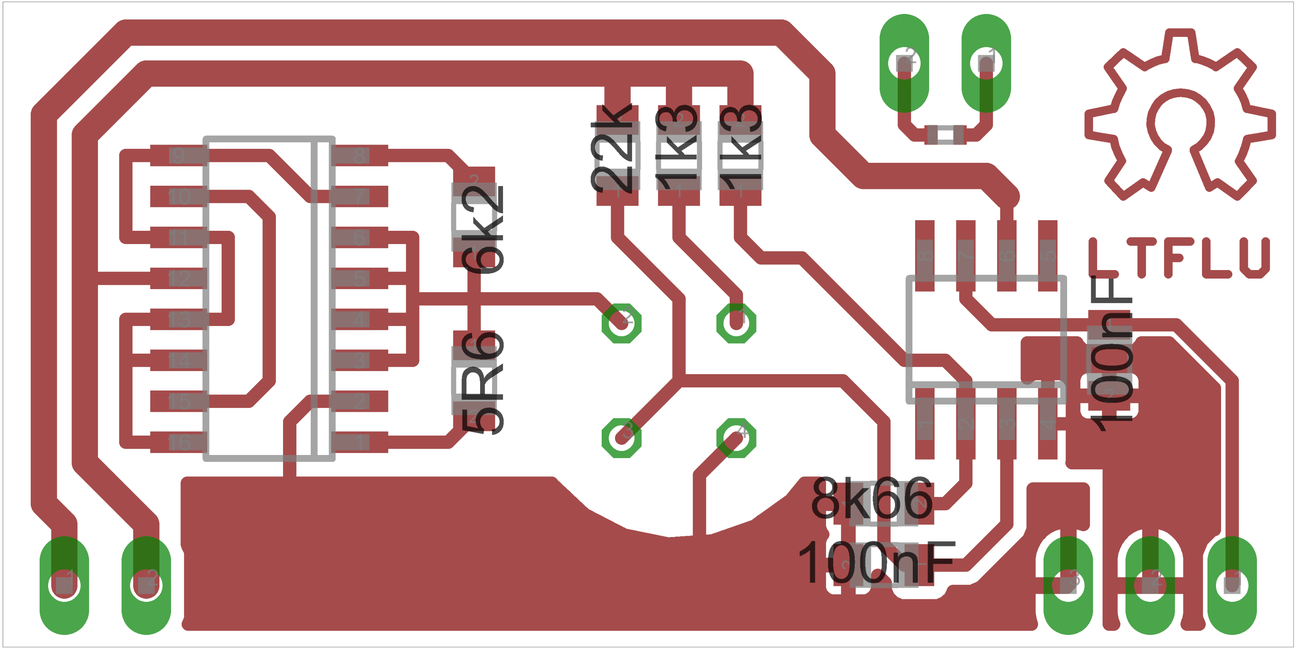 Several temperature profiles were performed with R13 = 22 kΩ and by varying the additional resistors R1 and R2, giving the following results. 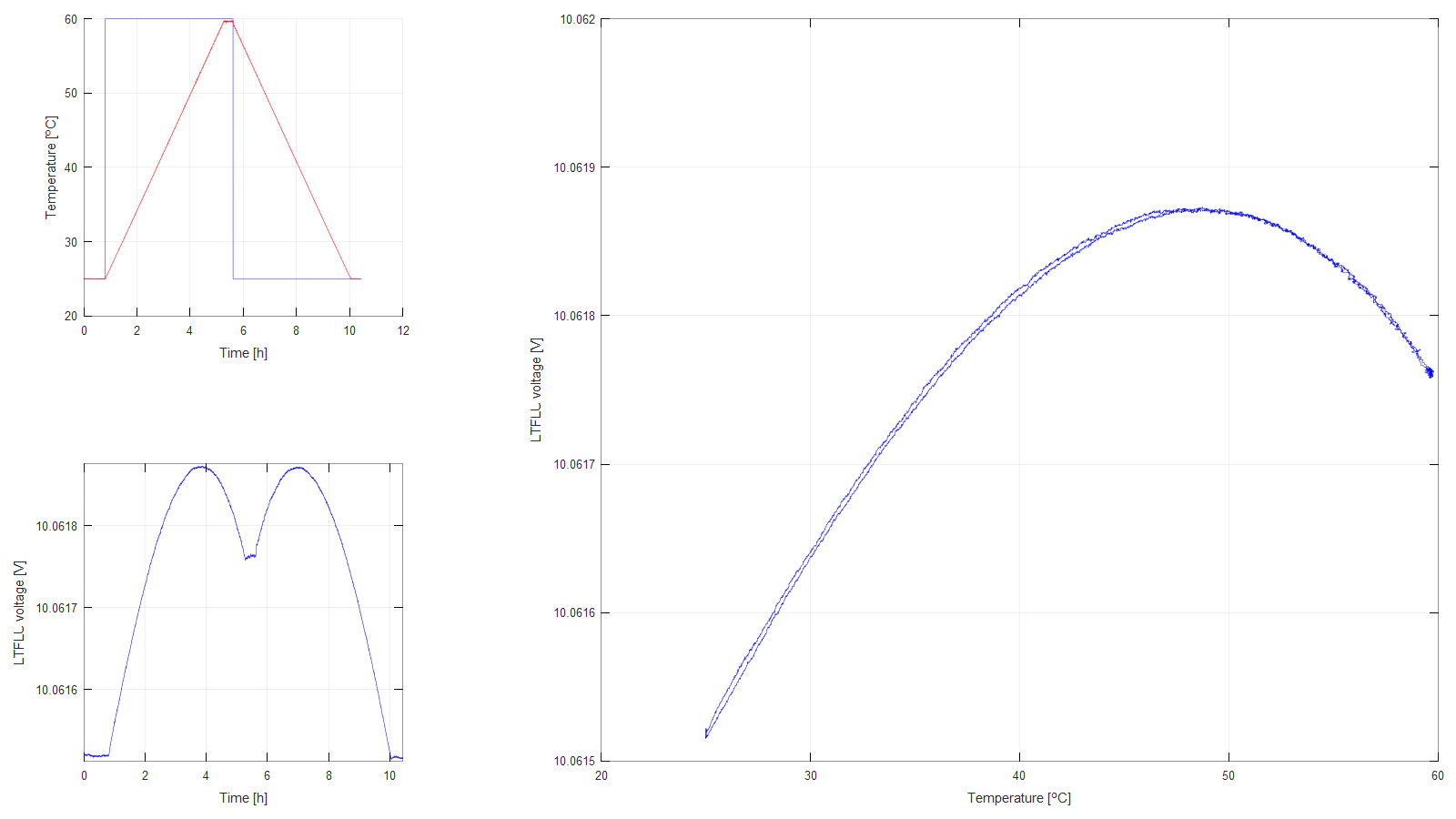 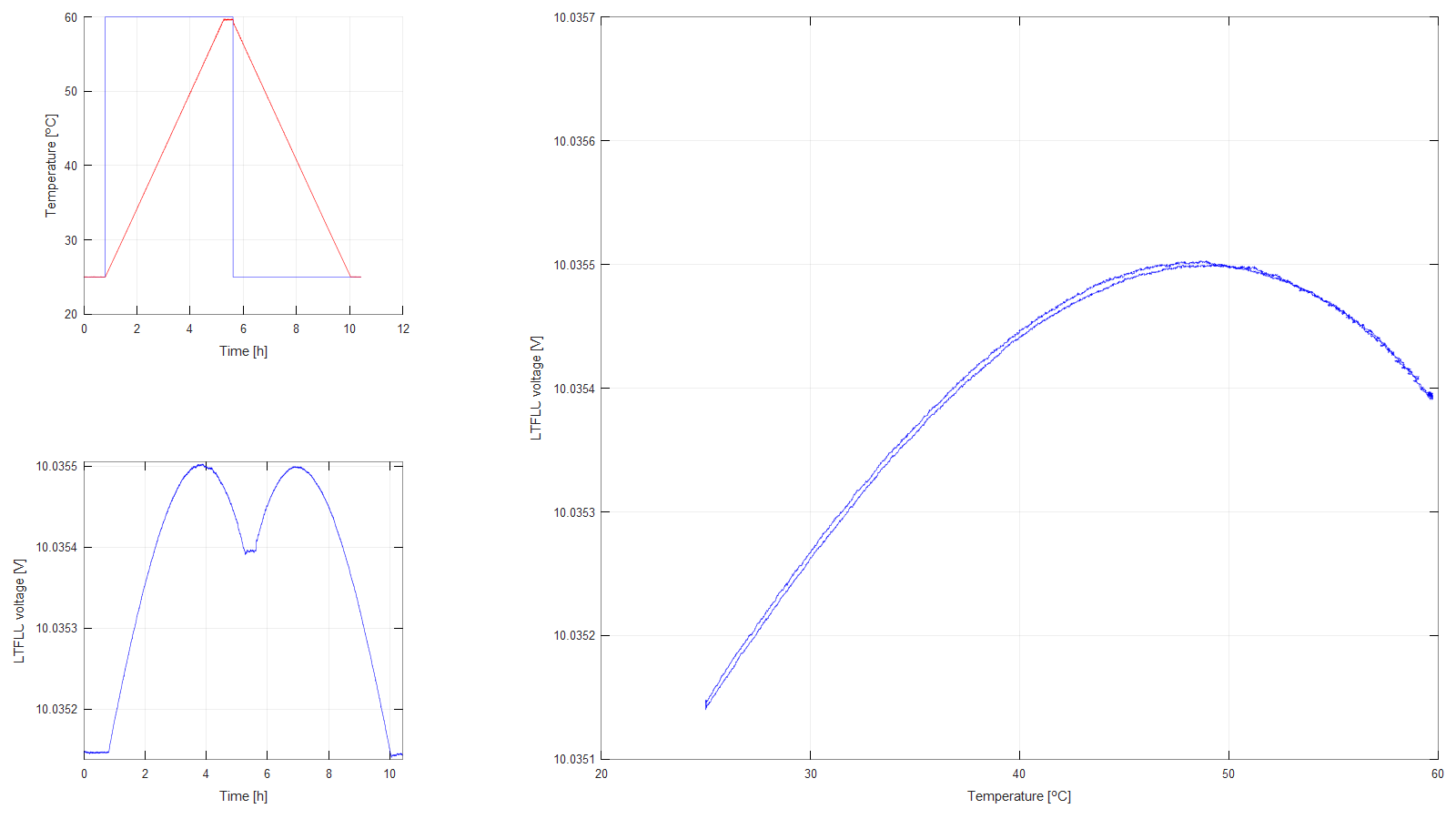 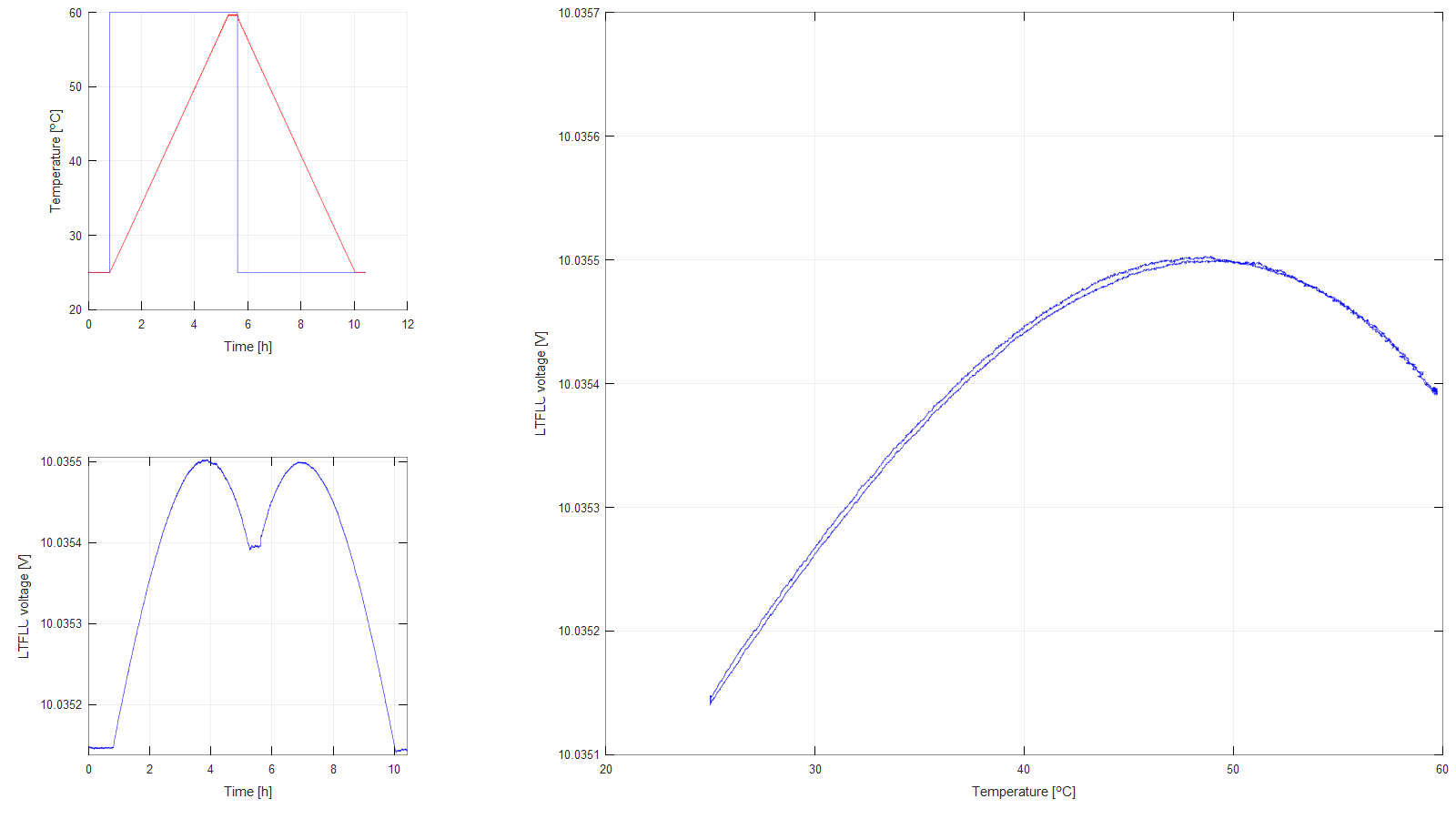 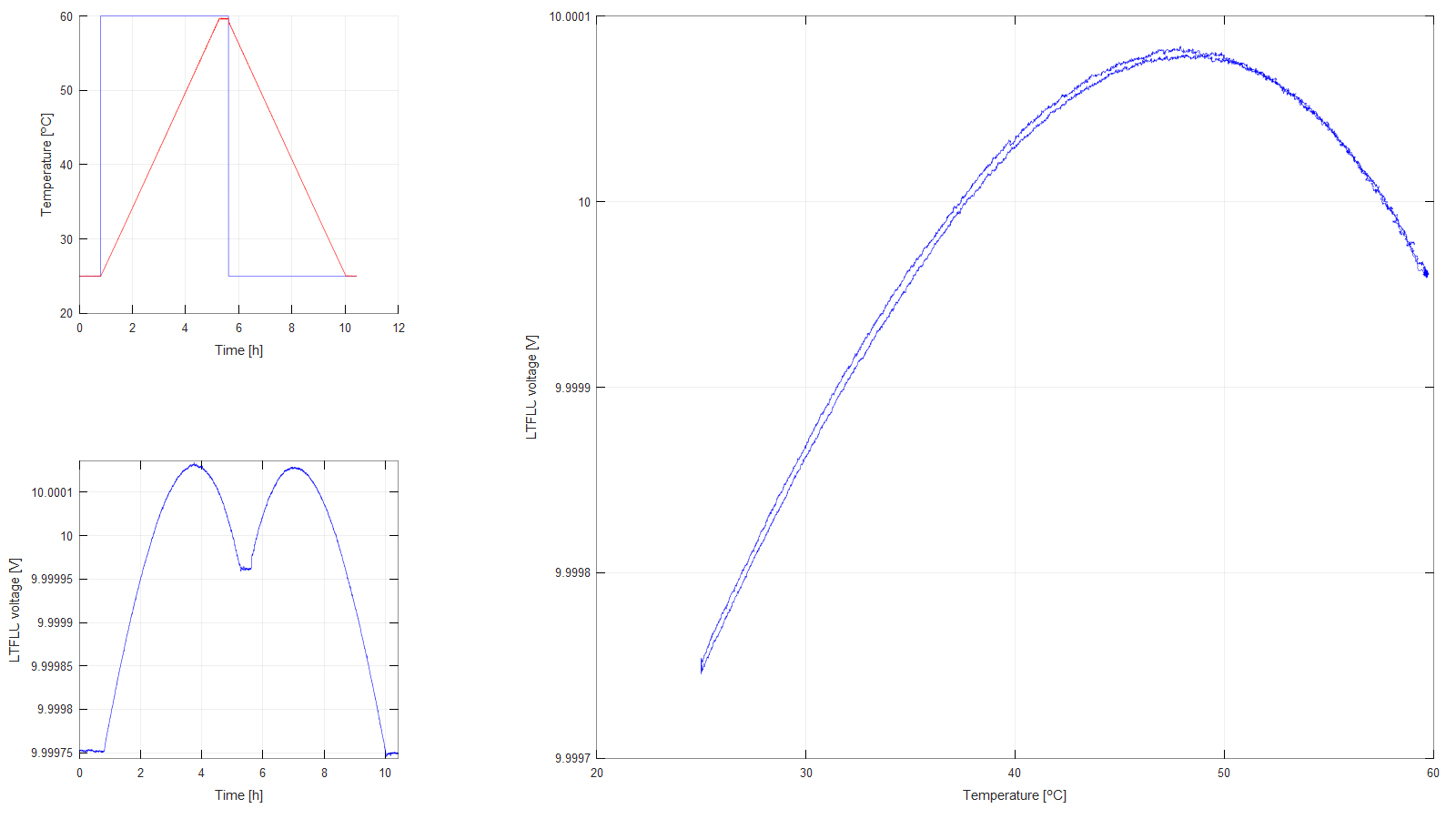 For the final application the aluminum board with the reference circuit and a 10 kΩ NTC type NCP15XH103F03RC with a Beta = 3380 K is assembled with a thickfilm resistor BPR10J101 attached to its back. The whole assembly is located inside a styrofoam box and lined with wadding. 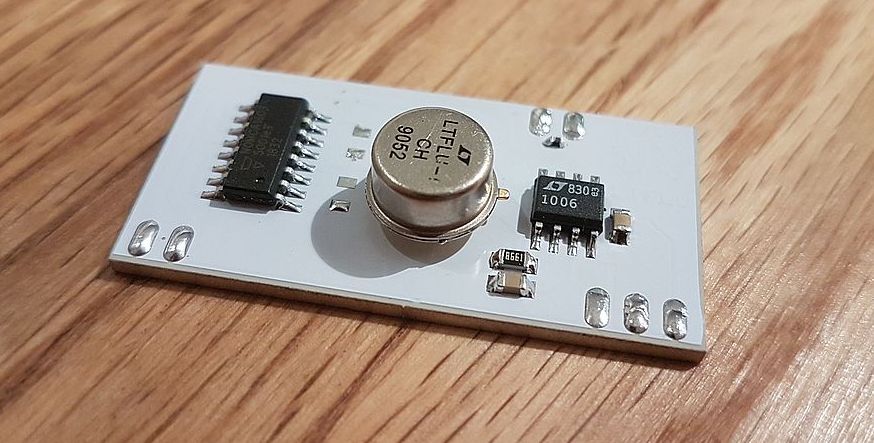 First a W1209 2-point controller was used to stabilize the oven temperature, which is powered by 12 V and uses a 10 kΩ NTCs. It can be set to the required oven temperature with a resolution of 0.1 °C. It turned out to create large temperature gradients on the aluminum board and the reference, that resulted in voltage readings with large switching noise. Thus, the idea was discarded and a linear temperature controller approach got in focus.

The resistance over temperature and Beta of the NTC are given in the corresponding datasheet. This values were translated into coefficients for the Steinhart-Hart equation using an this online calculator and fed into the Arroyo 5305 TEC controller. TEC controller configured to heat only mode with output voltages of up to 12 VDC. 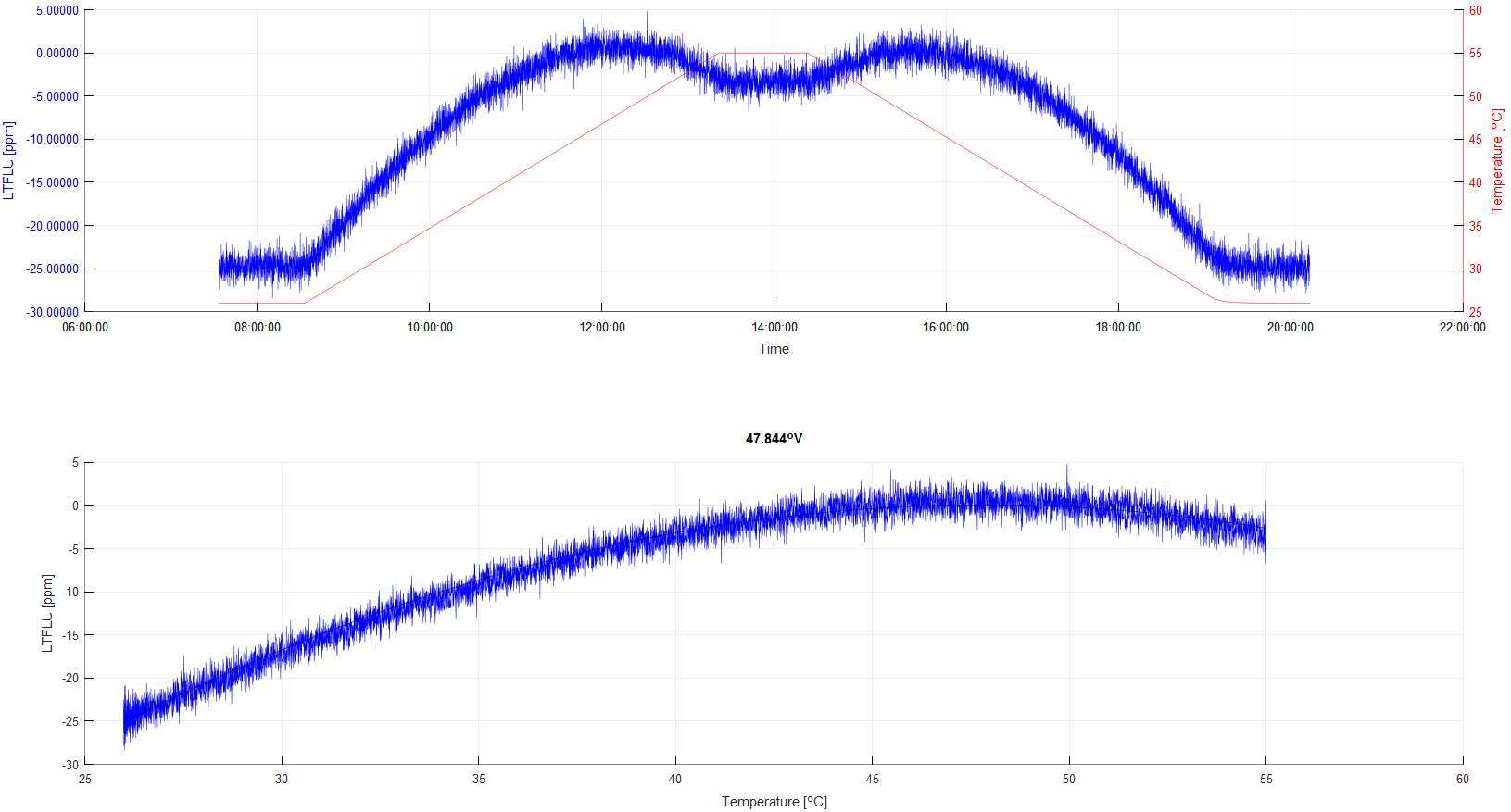 Figure 11: Temperature profie of the oven assembly with Arroyo 5305 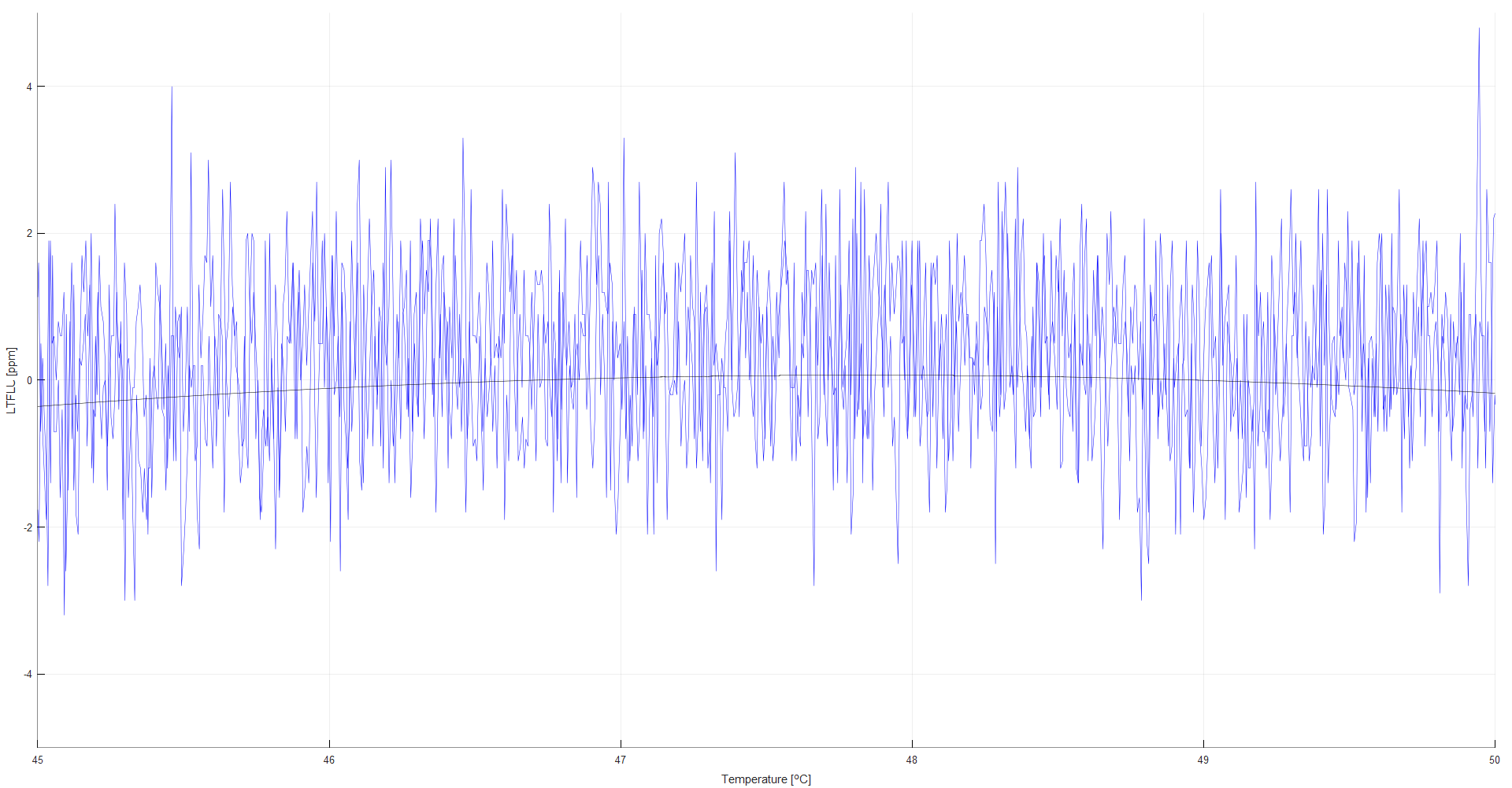 Figure 12: Zoomed in area over a range of ±5 °C output deviation observed less than 0.3 ppm

A temperature around +48 °C appears to be a good choice. Furthermore, the output voltage of the controller at this temperature was determined to be about 7.6 V. 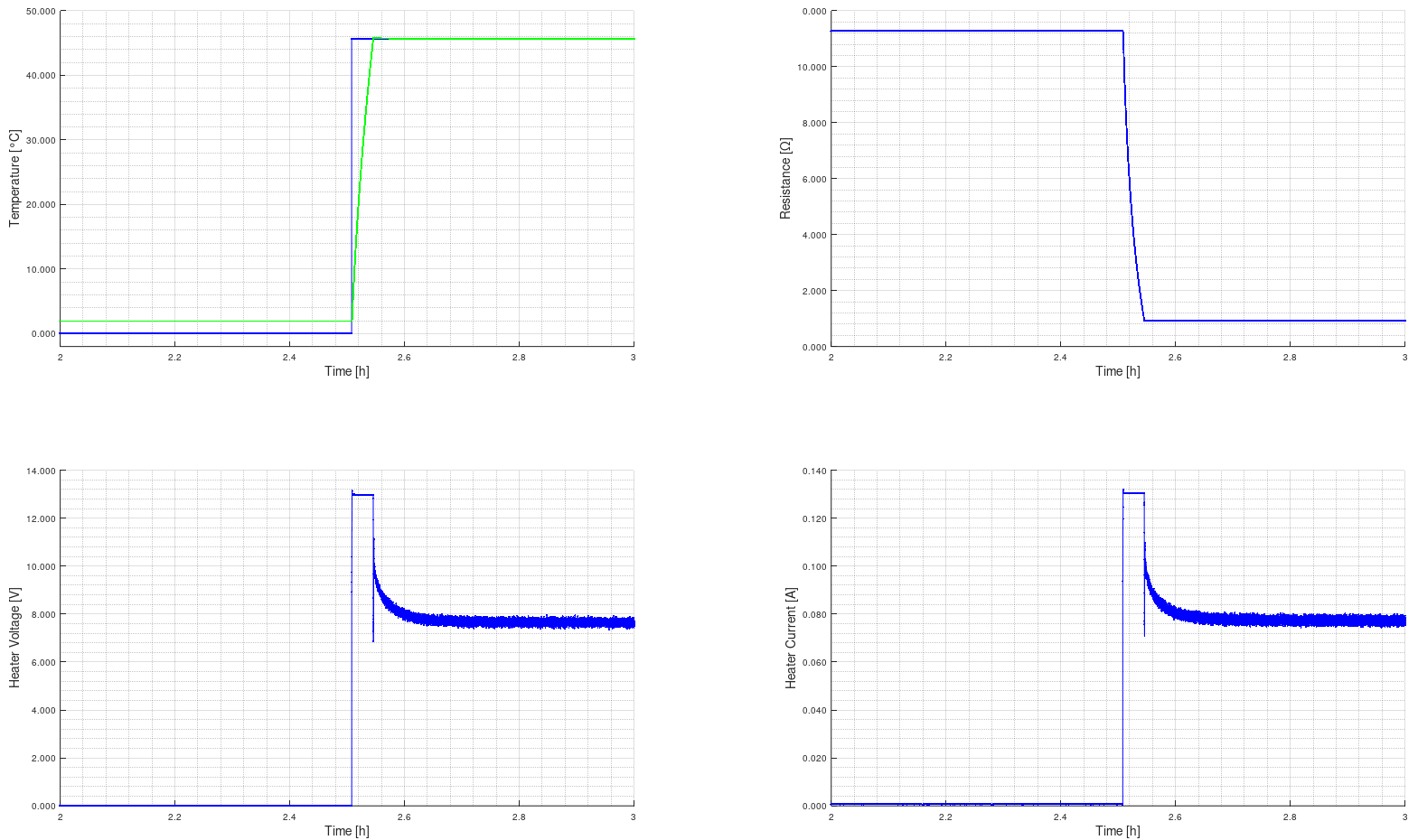 To derive the impulse response of the oven assembly alone aka of the open loop a voltage jump from 0V to 7.6 V across the heater resistor was performed using a lab power supply, while the controller was used to sample the NTC resistance as well as the calculated temperature. 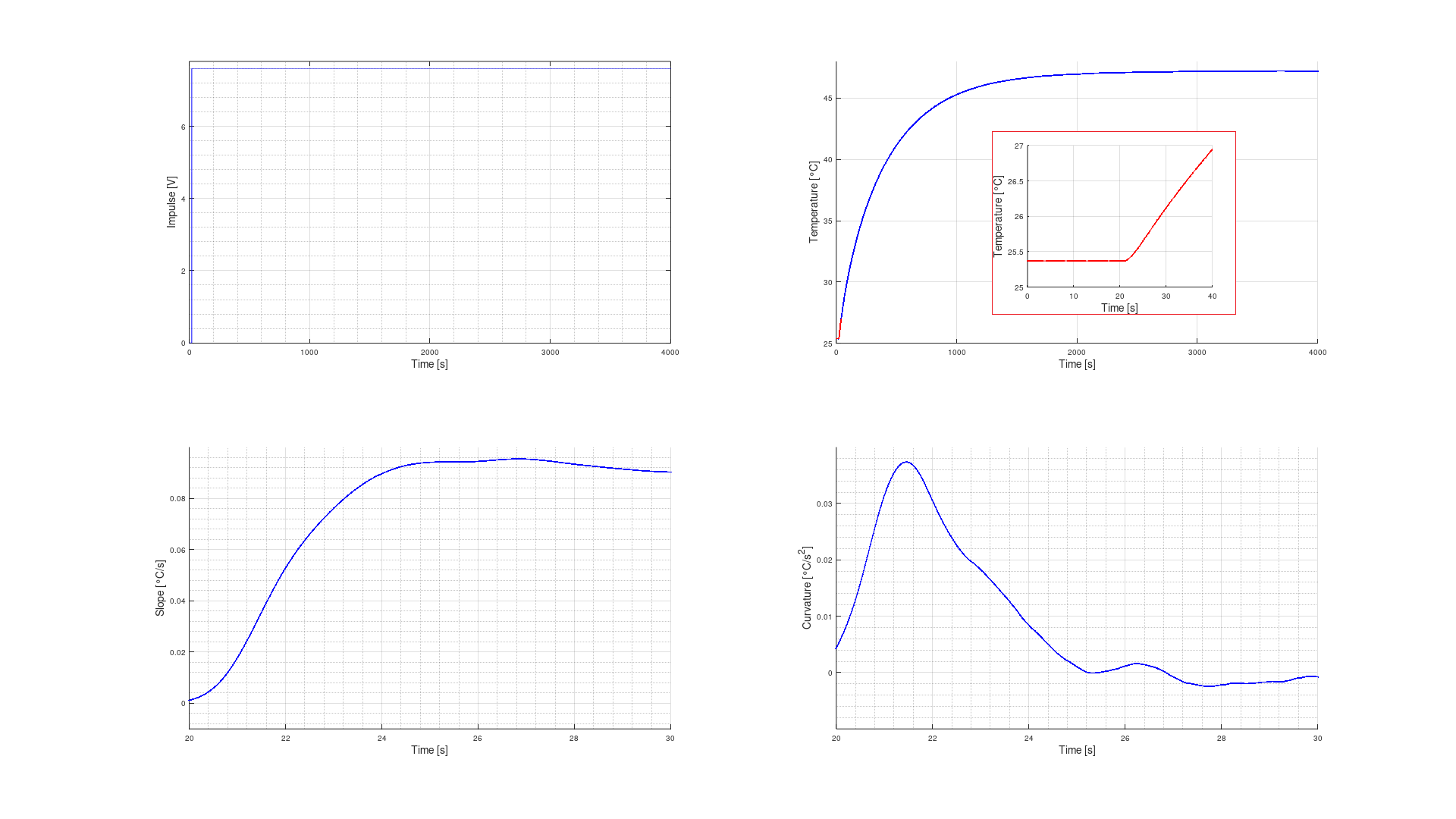 As shown, the oven assembly acts as a PT2 term. From the second derivative of the measured oven temperature the inflection point can be derived and the slope in this point from the first derivative. From there the tangent of inflection and both the dead time Tu and the compensation time Tg were calculated. This calculation was performed in GNU Octave using the diff command. 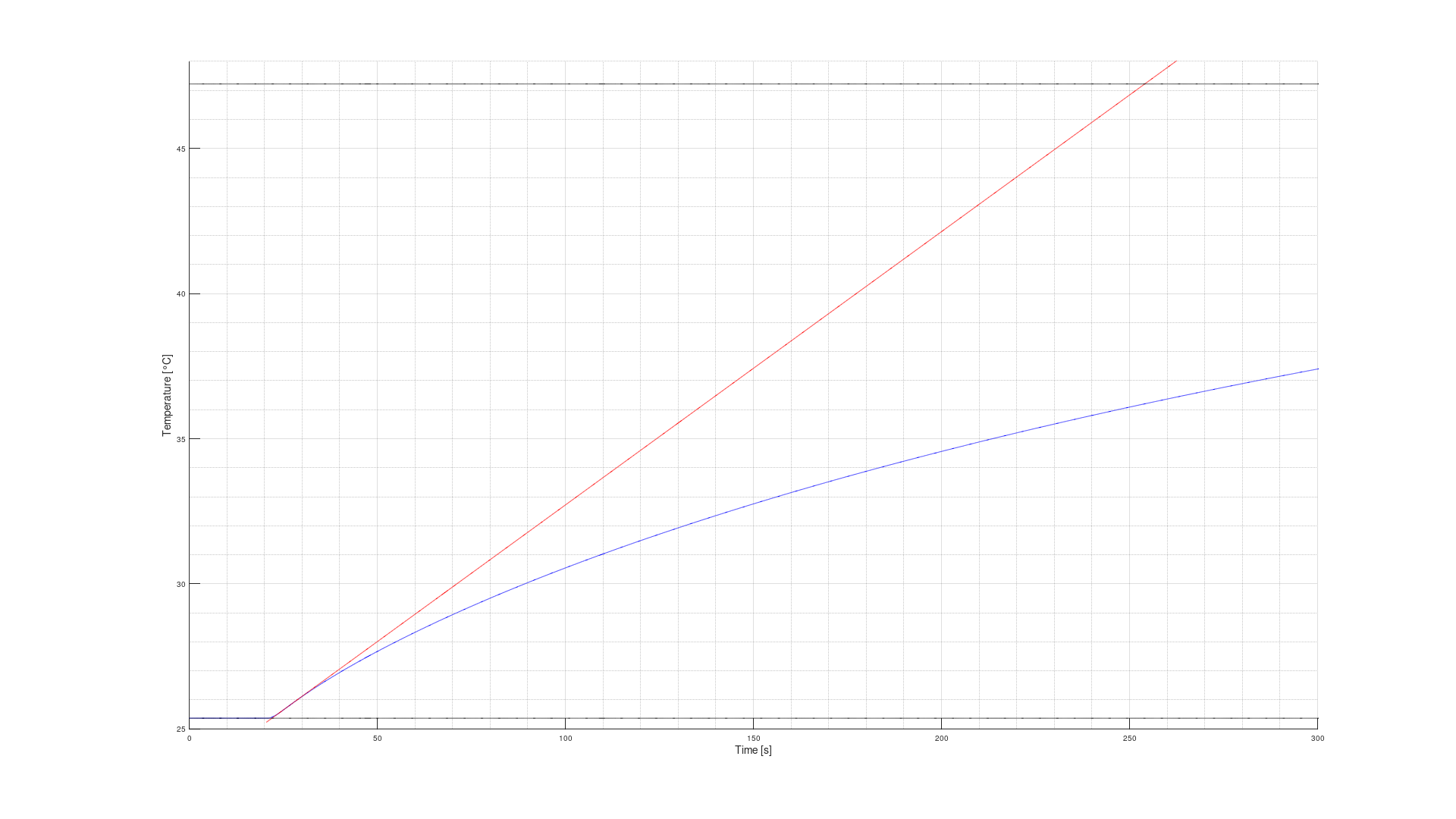 Figure 14: Determination of tangent of inflection and time constants

Now that the behavior of the oven is well known the controller can be designed. It was decided to use a PI controller. With the help of H. Walter and the control_theory1.lib by Helmut S .

Figure 15: Simulation model as a block diagram in LTSpice

The block diagram was then translated into an analog circuit and again build in LTspice, including the PI controller as well as a target delay to play with, the oven response as a PT2 term and the coupling with the NTC temperature sensor. The circuit was designed to use a single +12 V power rail for reference and oven only, thus an AD822 was used.

The simulation results prove, that a temperature of +47.59 °C should be reached, using standard resistor values without further adjustment, which is close enough to the optimum zero t.c. point of +47.844 °C

Based on this a perfboard for the oven was hacked together and tested for stability. 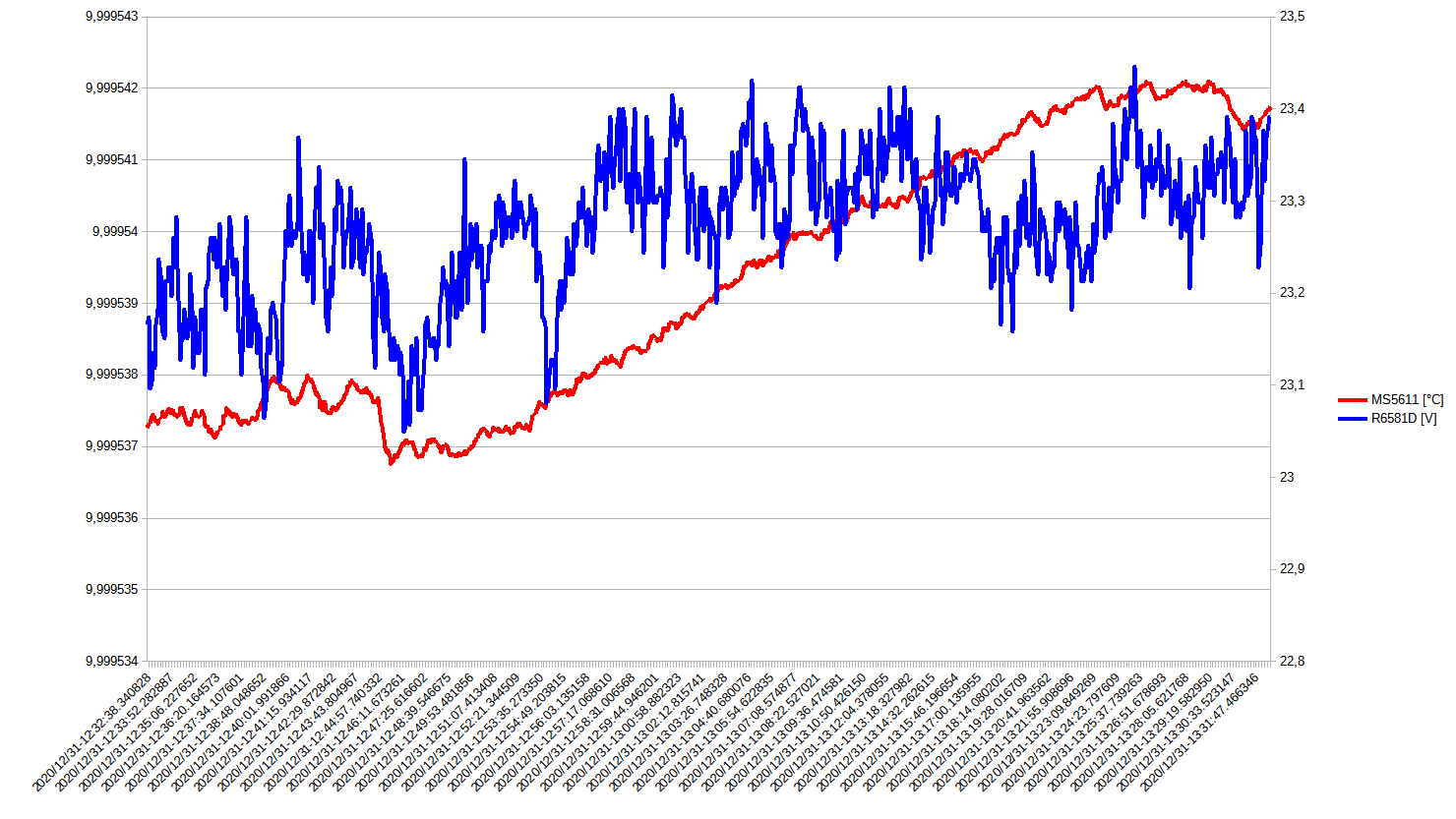 It was found, that the reference is rather noisy (refer to 1h stability measurement in the figure above). Since it wasn’t clear if this is limited by the noise of the NOMCA16035001 network or the reference itself, a new revision with TOMC16031002 network was designed. 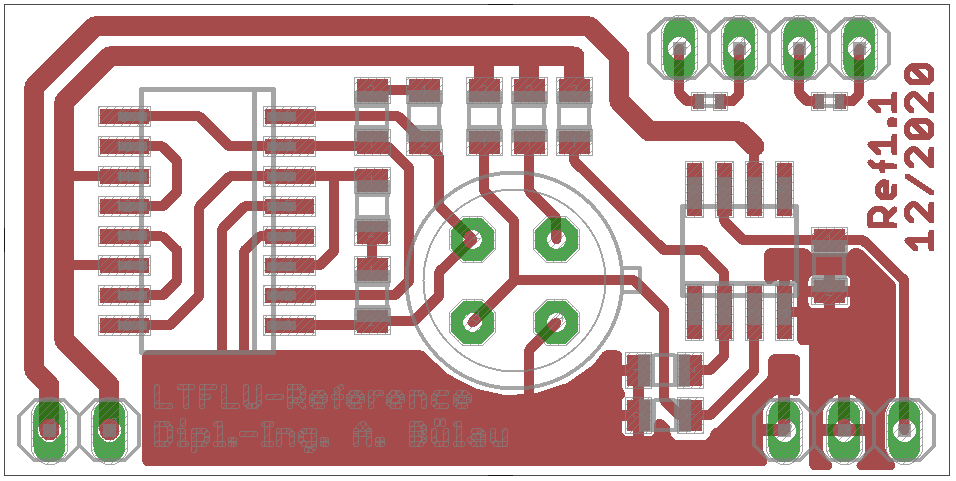 As well as own measurement indicated lower noise, more than a factor of 10, from TOMC is to be expected.

Unfortunately TOMC comes in a slightly different package than NOMCA, medium SOIC16 instead of narrow SOIC16 and wasn’t available in a 5kΩ version but 10kΩ instead, so it couldn’t be used as a drop-in replacement.

The modified circuit thus has a slightly different resistor arrangement. Furthermore, the network has a different connection scheme to allow trimming either the upper or the lower part of the network. This way references with different output voltages can be adjusted to 10V. A second NTC was added, to allow observing oven stability with an external measurement device. 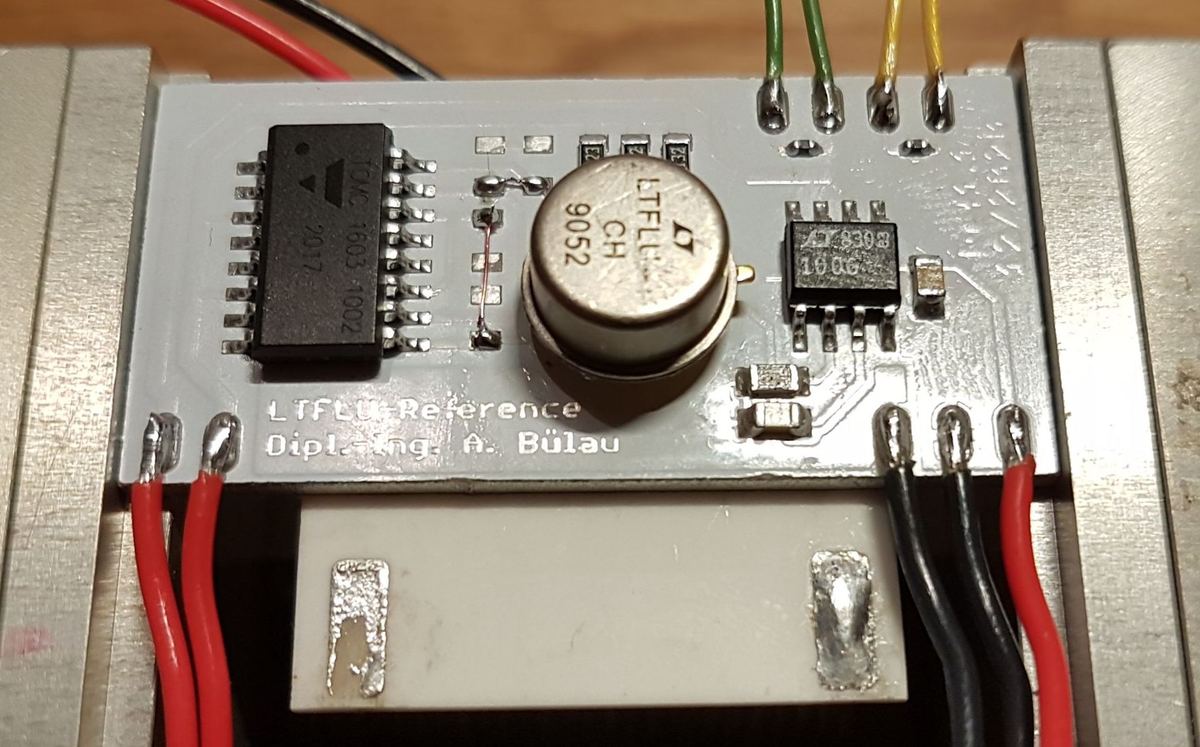 The board was then put back into its styrofoam box and connected to the TEC controller. Starting with the former found PID parameters a new autotune was performed using the first onboard NTC. It turned out that with the new board the parameters slightly changed from:

With this parameter another temperature sweep from +25 to +60 °C and back was performed to test how zero t.c. temperature point changed. The second onboard NTC was monitored with a meter in parallel. The z.t.c. temperature was found at around +54.5 °C, due to the higher output voltage of 10.35 V. 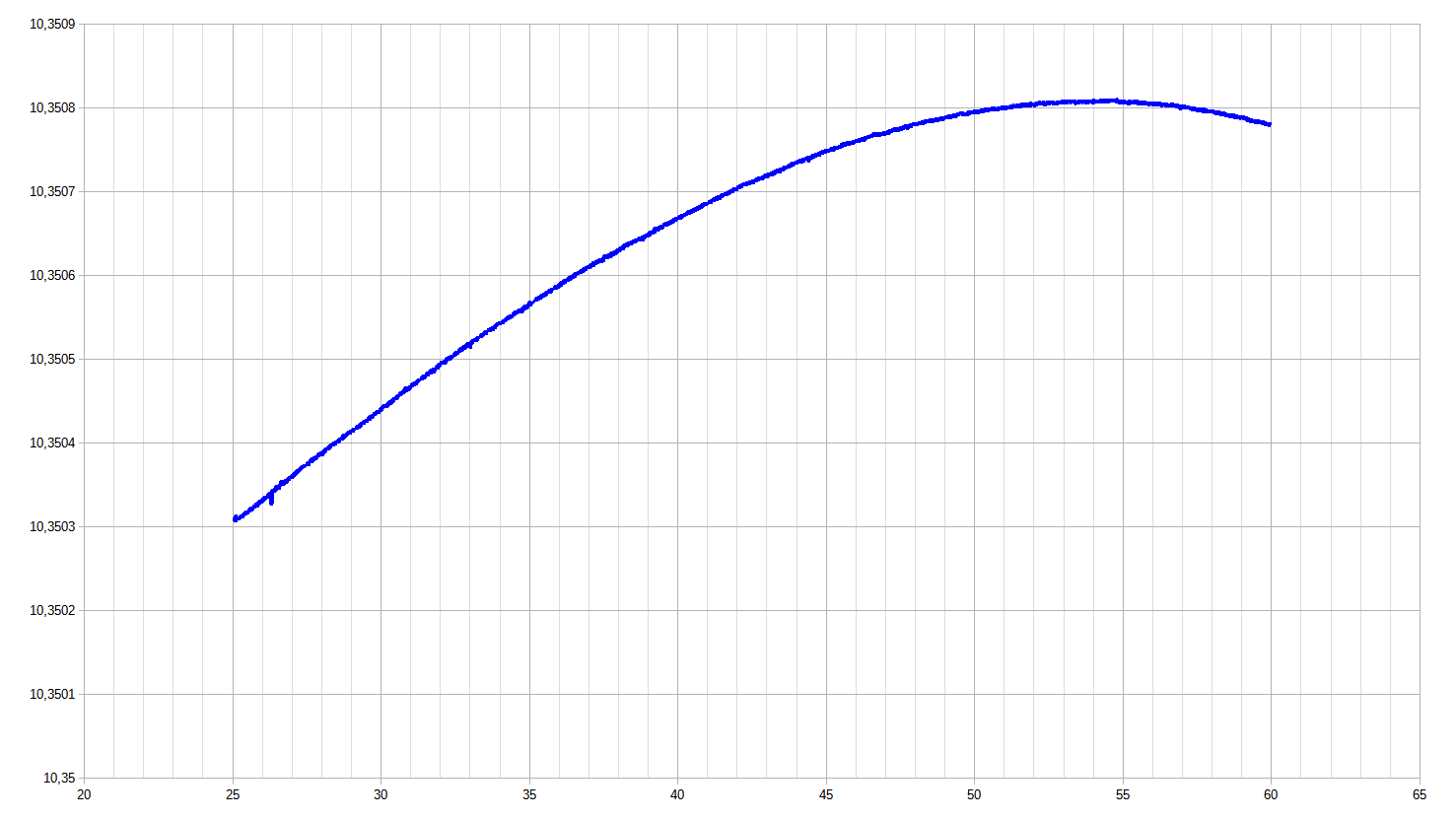 Next, stability at z.t.c. temperature was tested. The figure below shows the 1h stability. Compared to former stability measurement with NOMCA network, noise has somewhat improved, but still wasn’t satisfying 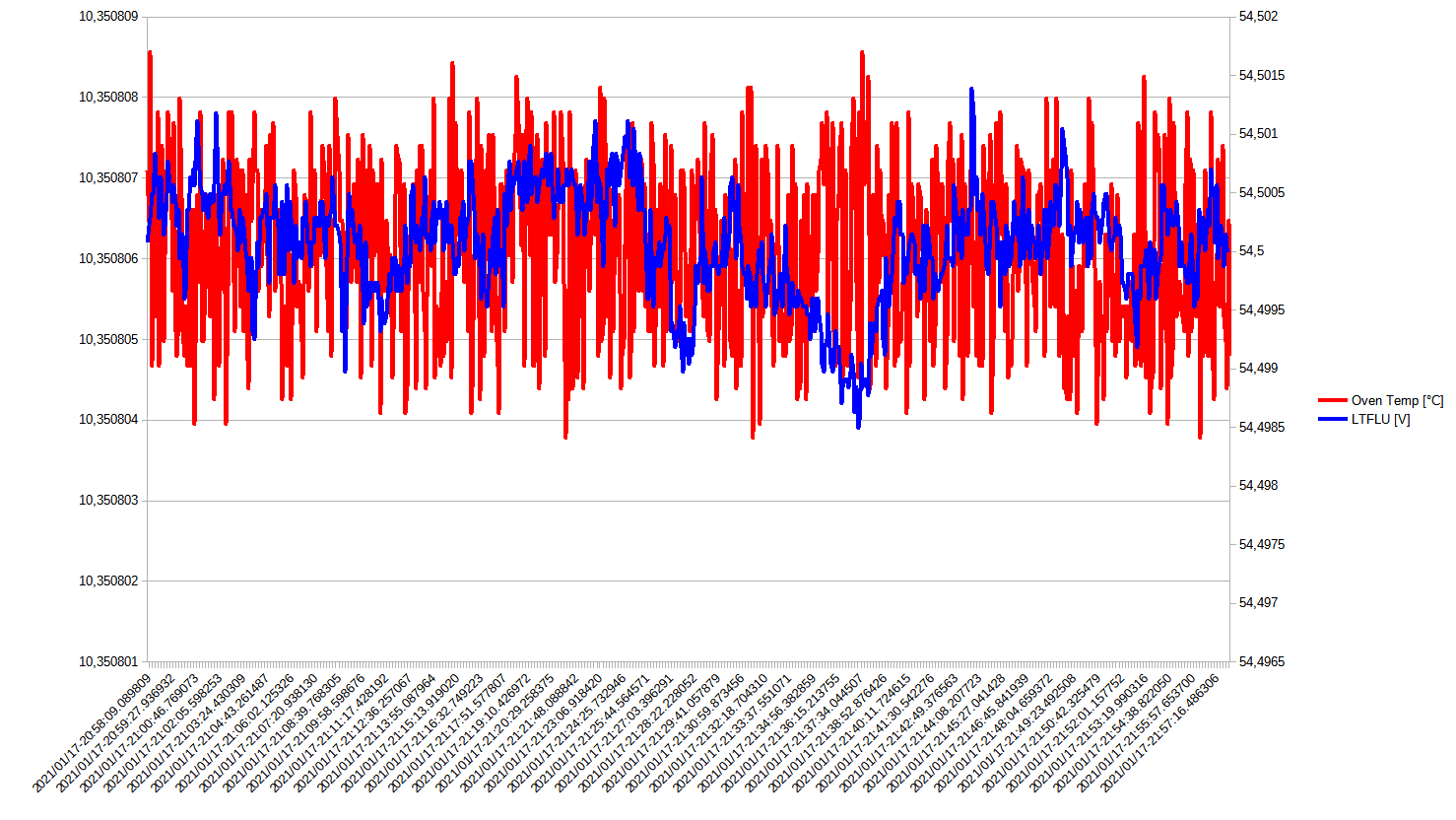 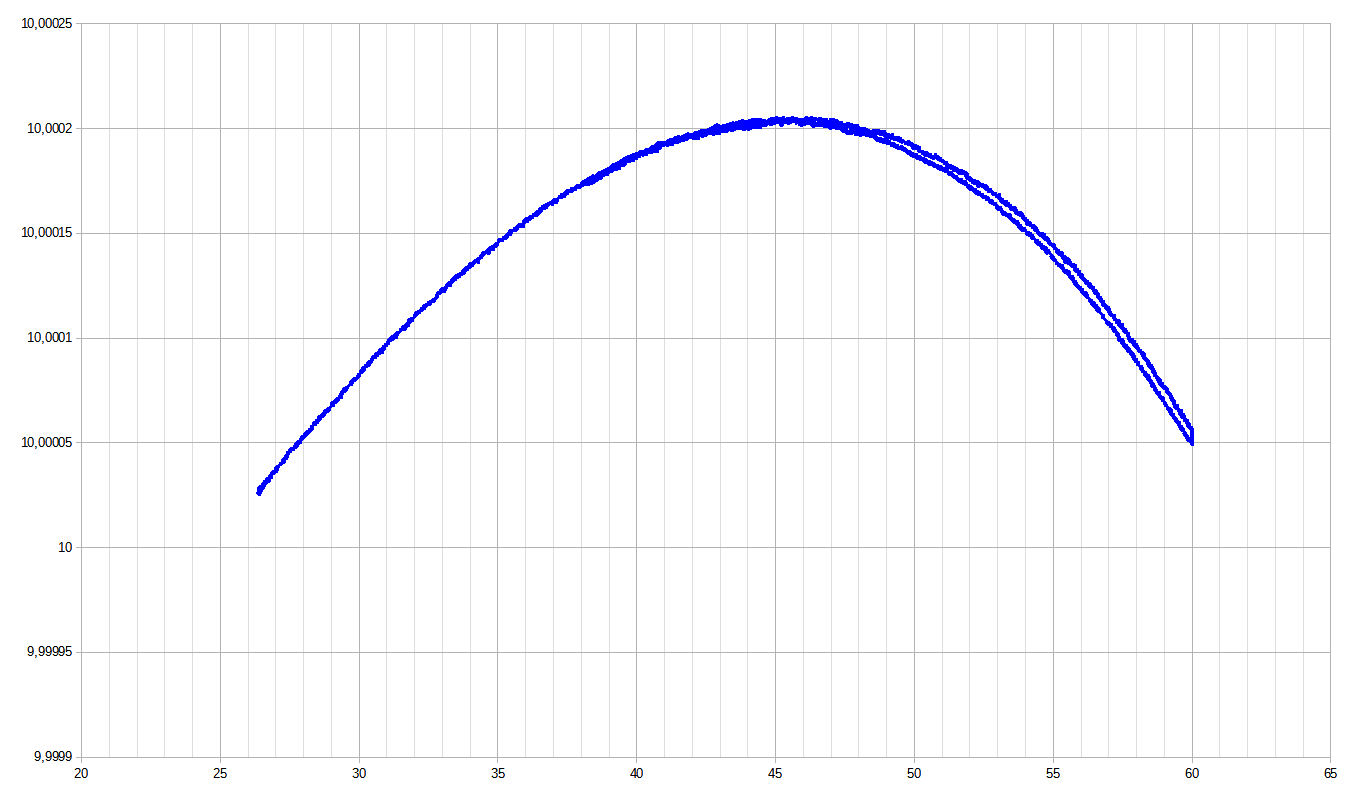 During the experiments it was observed, that leaving the aluminum board floating resulted in all sorts of disturbance of the reference output voltage and spikes by interference due to an unknown external source, that fully vanished, once the aluminum was tied to ground.

A measurement of the stability over a few hours shows, that noise is now more in the order of a conventional low noise reference such as LTZ1000 but still slightly higher. Use of better TOMC network improved things significantly. Next step is to adjust the discrete oven to the new temperature and repeat measurements (stability, noise etc.). 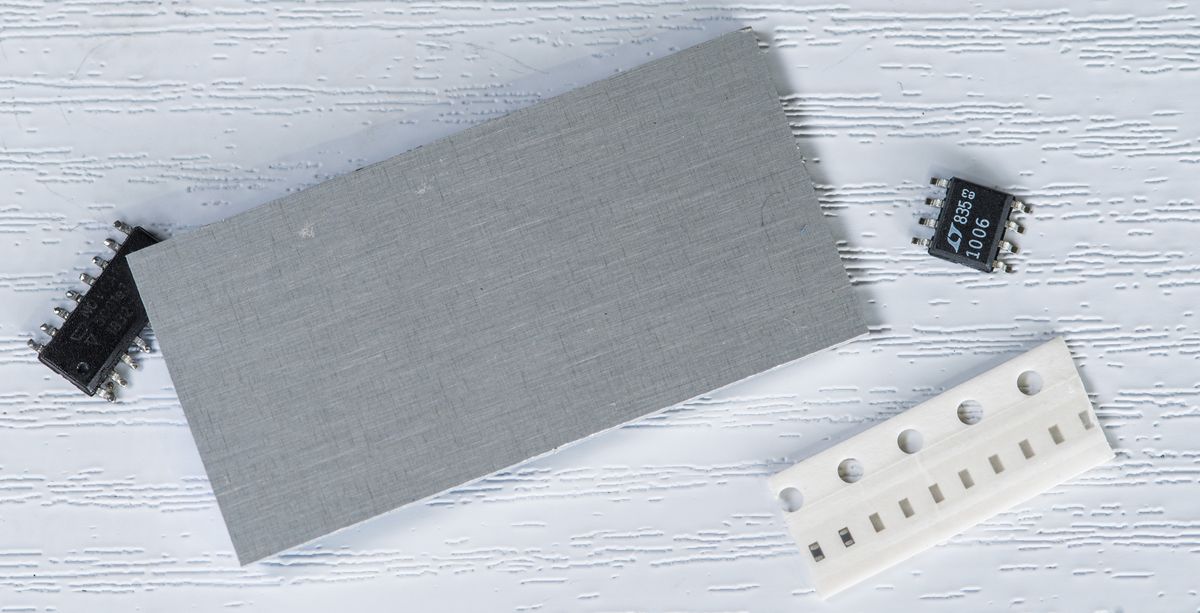 And photograph of assembled module with cheap test resistors: 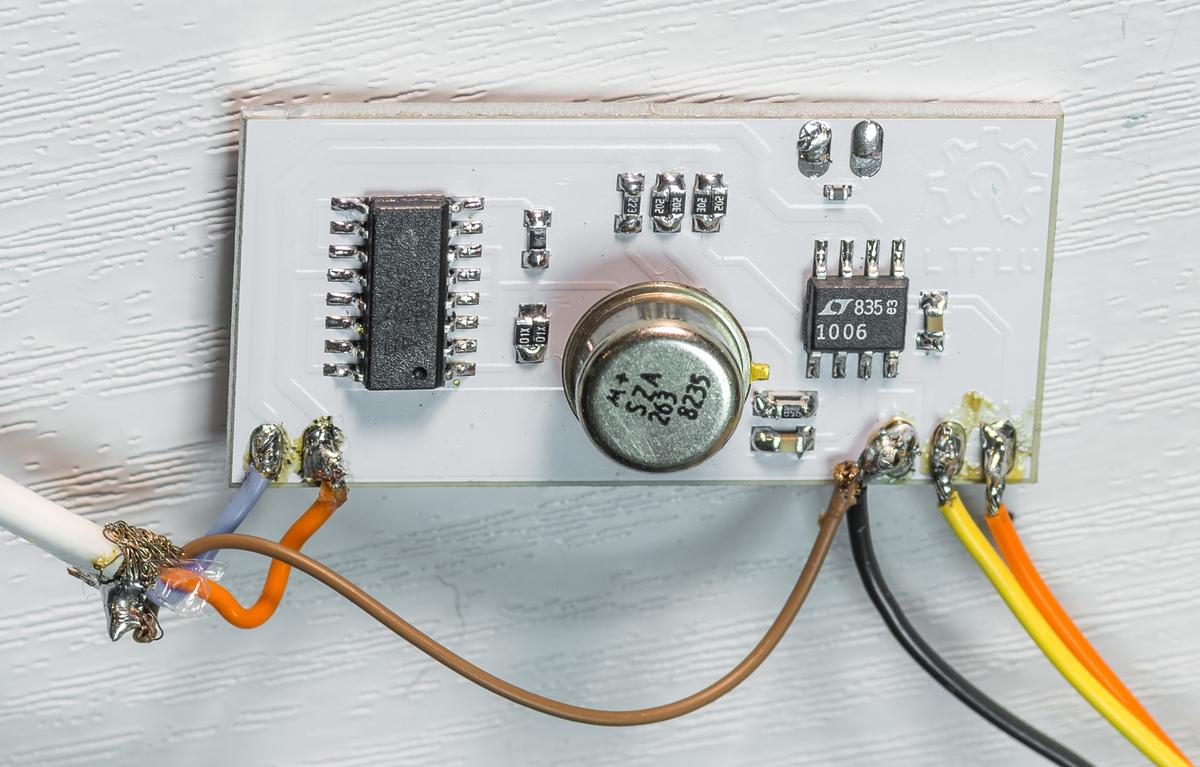 Next step would be trimming for precise 10V output, fine-tuning temperature stability and doing noise performance tests and measurements.