It is listed as being compatible with the following LeCroy oscilloscope instrument families:

The probe described in this review was supplied with a HDO9000 series oscilloscope that was being retired from a rental fleet. (Interestingly, the HDO9000 manual seems to suggest that it ships with a PP022, not a PP023, so this probe may not have been the original for the scope.)

The probe is likely an OEM design and the tip insulators appear to be PMK products, however the overall probe does not appear to exactly match any known PMK model. The PMK PML711A-RA is the closest one found to date, but is not the same.

The probe has an overall high-quality feel with molded strain reliefs and a rubberized exterior for good grip.

A R&S HMC8012 multimeter was used to measure the probe loading at DC. The probe tip measured 10.206 MΩ to ground.

End to end, the probe measured 9.0194 MΩ from BNC center contact to tip, and 48 mΩ from BNC ground to probe ground sleeve.

BNC interface to the scope

The compensation components are located in a widened area of the probe body immediately adjacent to the BNC connector. A plastic collar over the BNC locking ring contains a pogo-style spring loaded contact with a resistor to ground, used by the instrument to identify the type of probe. The resistance from ground to the pogo pin measured 10.6721 KΩ on this probe.

The probe handpiece has a threaded barrel for attaching an insulating sleeve. This sleeve must be removed to attach some of the grounding accessories, and is then re-attached to hold them in place.

Unlike some probes where the long alligator-clip ground is simply snapped around the probe barrel, the PP023’s ground clip is connected to a very snug-fitting ring which makes much better contact with the probe barrel than the more common clip design. 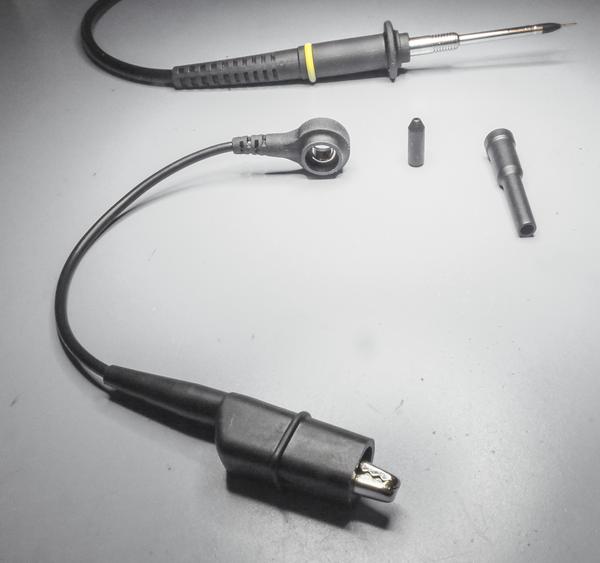 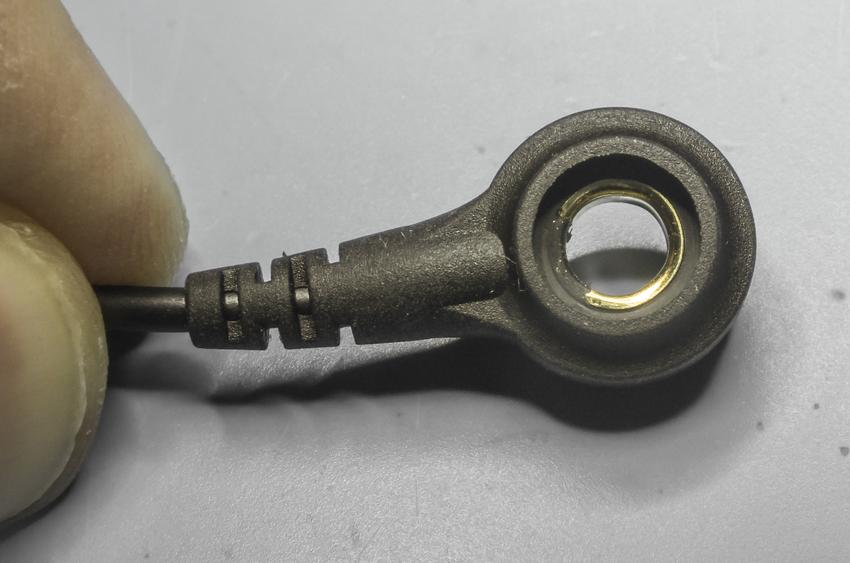 In addition to the common alligator clip and spring ground, the PP023 also has a rather unique grounding accessory: a stiff Z-shaped wire that can be rotated in its socket to adjust the tip-to-ground spacing. As with the alligator clip ground, this is a snug-fitting sleeve that completely encircles the probe body and must be slid on from the end. 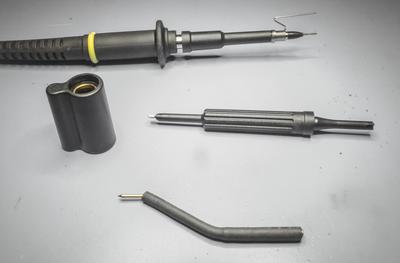 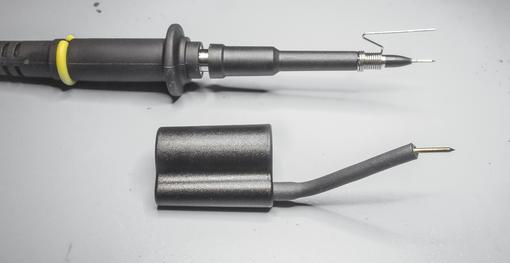 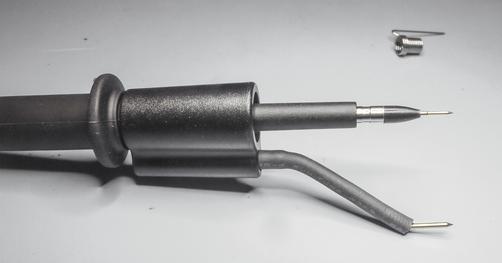 Several tip accessories are provided: a standard spring ground, a replacement tip (which screws into the barrel once the insulating collar is removed), a series of color-coded insulating caps for probing IC pins without shorting to adjacent pins, and a grabber hook. 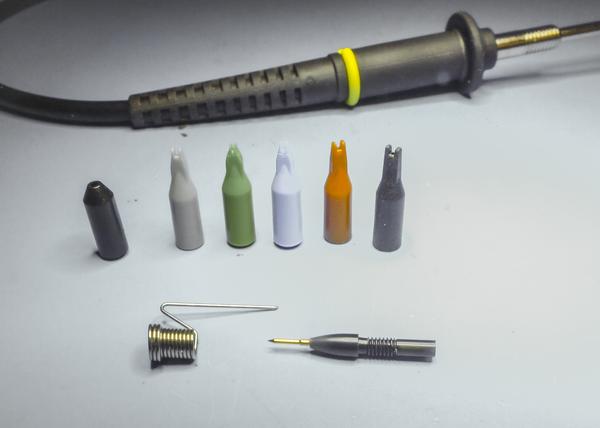 Additionally, two custom coaxial socket adapters are included which directly accept a probe tip. One has a push-on BNC male connector, the other (not pictured) is a through-hole solderable connector intended for use as a PCB test point. 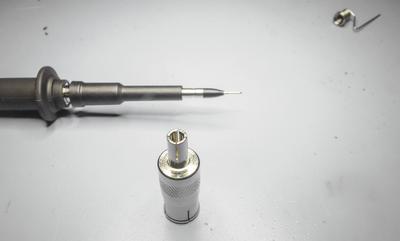 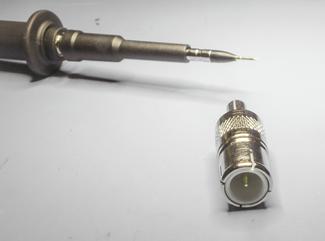 The probe is compatible with standard bipod-style probe holders, however one is not supplied as a standard probe accessory. 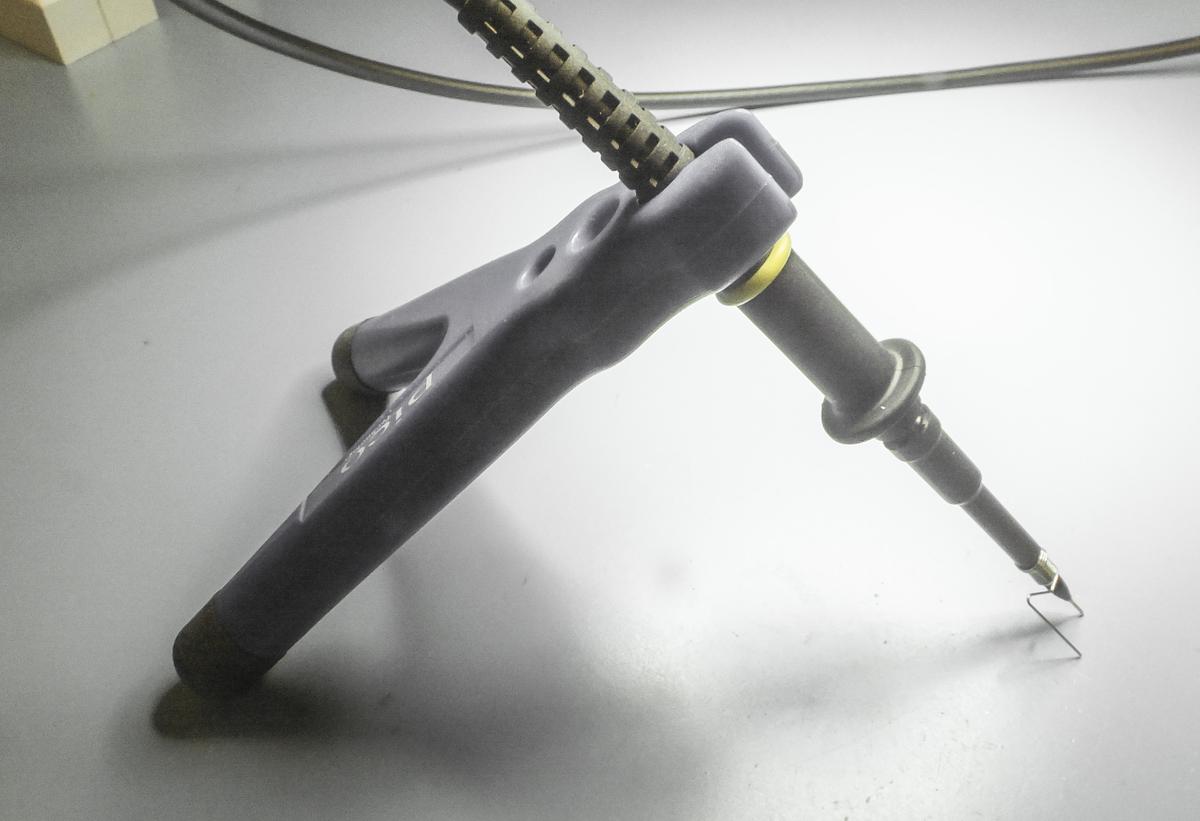 The probe was compensated per the manual before testing using the scope’s calibration output for low frequency compensation, and the scope’s fast-edge output and the BNC-to-probe adapter for high frequency.

After compensation was complete, several artifacts were still visible in the fast-edge signal: a large dip at around 500 ps from the midpoint of the rising edge and a smaller dip at around 13 ns. None of the compensation adjustments were able to remove them. 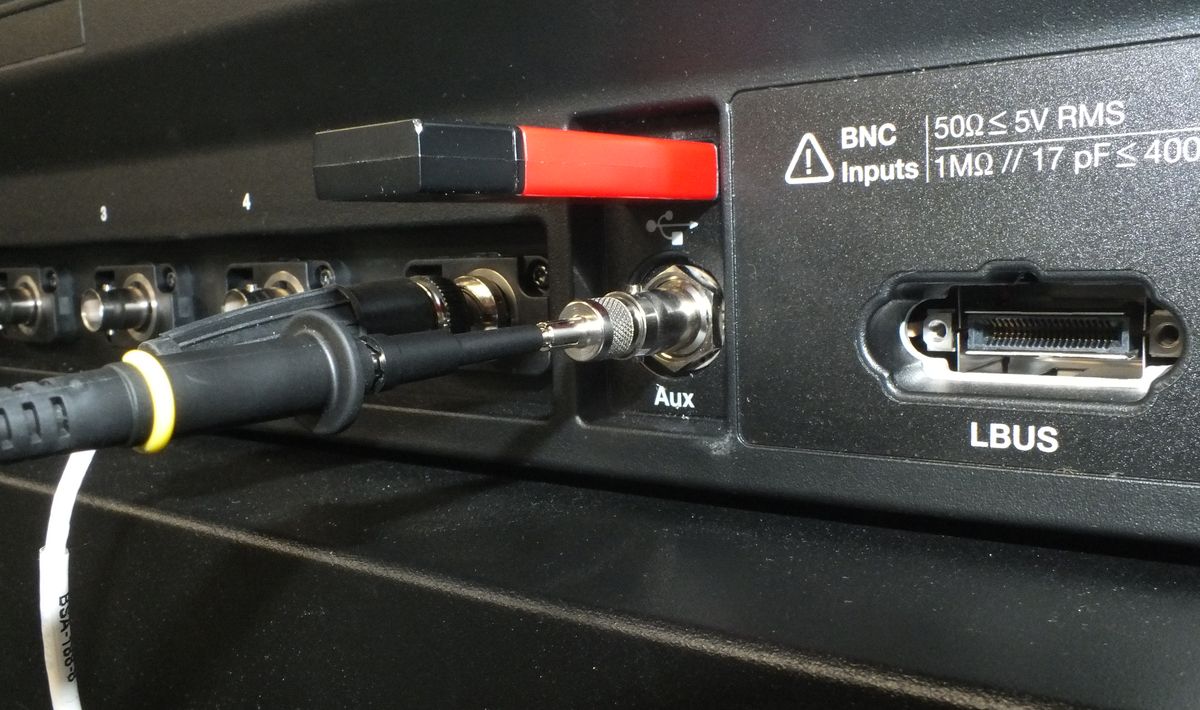 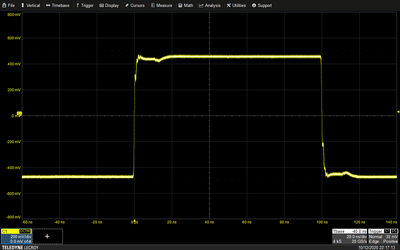 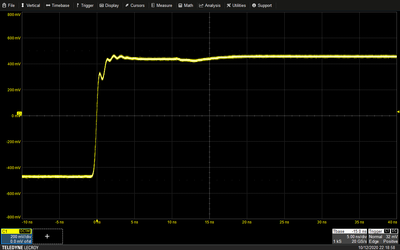 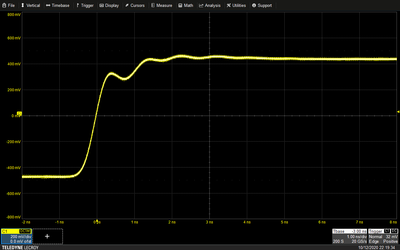 A test fixture containing a short length of terminated 50Ω line was connected to the Leo Bodnar pulse generator with a 3-inch SMA cable (Crystek Microwave CCSMA-MM-086-3). Measurements were taken using the spring ground as close to the terminating resistor as possible.

The same dip as seen in the previous test at 13 ns from the edge was visible, however the dip on the rising edge is replaced with ringing overshoot, presumably due to inductance of the spring ground. 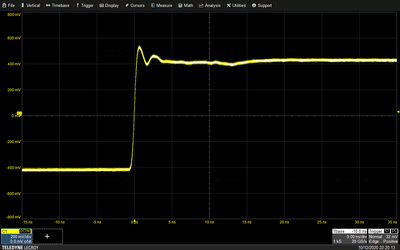 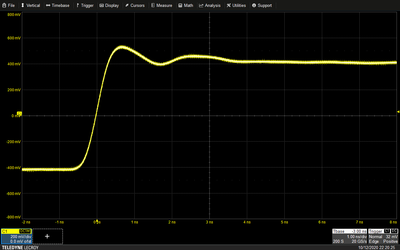 VNA S11 measurements were taken from 300 kHz to 6 GHz of the probe on the same test fixture. Across a 50Ω load with fixture effects de-embedded, significant (>-10 dB S11) return loss was observed from about 275 to 775 MHz. 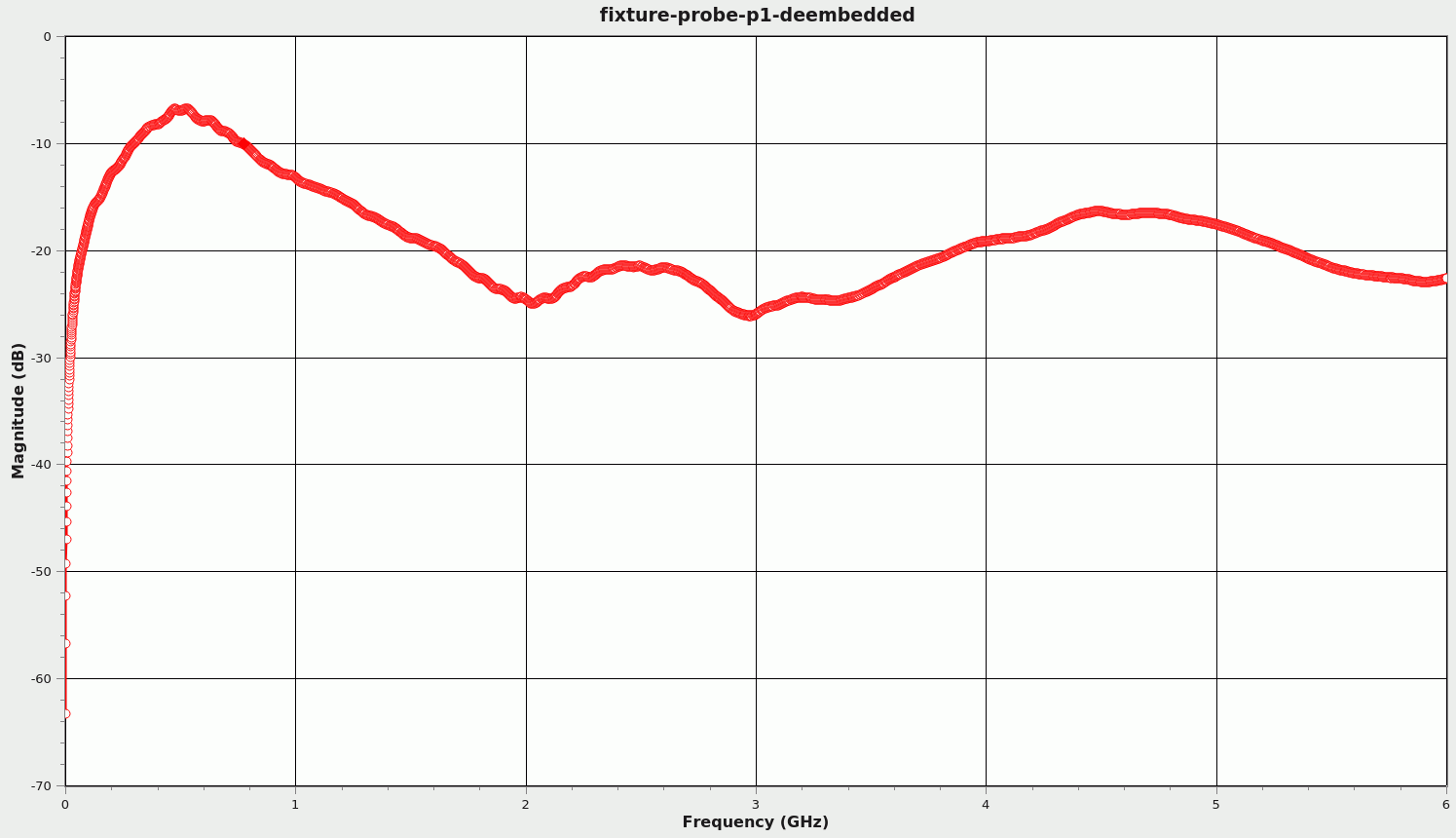 The LeCroy PP023 is well made and performs substantially good as expected. It’s a standard passive scope probe and not particularly special, but definitely a cut above the cheap probes shipped with an entry-level Rigol or similar.

I use them on a routine basis in my lab for looking at lower speed signals such as I2C, as well as higher voltage signals such as +12 VDC power rails which are outside the operating voltage range for typical high-speed probes.