The SP200 is a custom form factor and appears to be a fully in-house design, not based on an OEM product.

The SP200 is unique in that it’s designed solely for use on a positioner and makes no attempt to be ergonomically suitable for handheld use. The probe consists of a small PCB with an M4 threaded insert soldered to the back end for mounting to a threaded stud on the PCBite positioner arm.

The positioner took some getting used to working with, but gave good results once the limitations of the form factor were understood. Starting out I expected the arm to be stiff and hold its shape when bent, so I kept having problems where I’d come in at a shallow angle and the weight above the tip would cause the arm to tip over. It seems that best results are obtained with the tip, probe body, and arm roughly in a straight line to prevent any forces outside of this plane. The probe prefers to come in at fairly steep vertical angle, at shallower angles it tends to skid sideways. This can make probing smaller test points under a microscope somewhat challenging, but with some practice I was able to make it work.

The probe connects to the DUT via a pogo pin which slides into a cylindrical socket soldered into a slot milled into the PCB. The ground connection is via a single square header pin, which connects via a standard jumper wire to a micro grabber.

No provision is provided for a low-inductance tip-side ground spring or similar. But there are exposed copper pad designed to allow user easy soldering of ground pogo pin to make proper high-speed measurements with the probe.

An edge launch MMCX connector on the probe head provides a coaxial RF interface to the oscilloscope.

The attenuator on the probe head is hidden behind an EM shield can, so no analysis of the actual circuit could be performed. It is presumably based on the standard R-C divider probe circuit.

The probe cable has a right angle MMCX at the probe end, and a BNC at the oscilloscope end with compensation components. 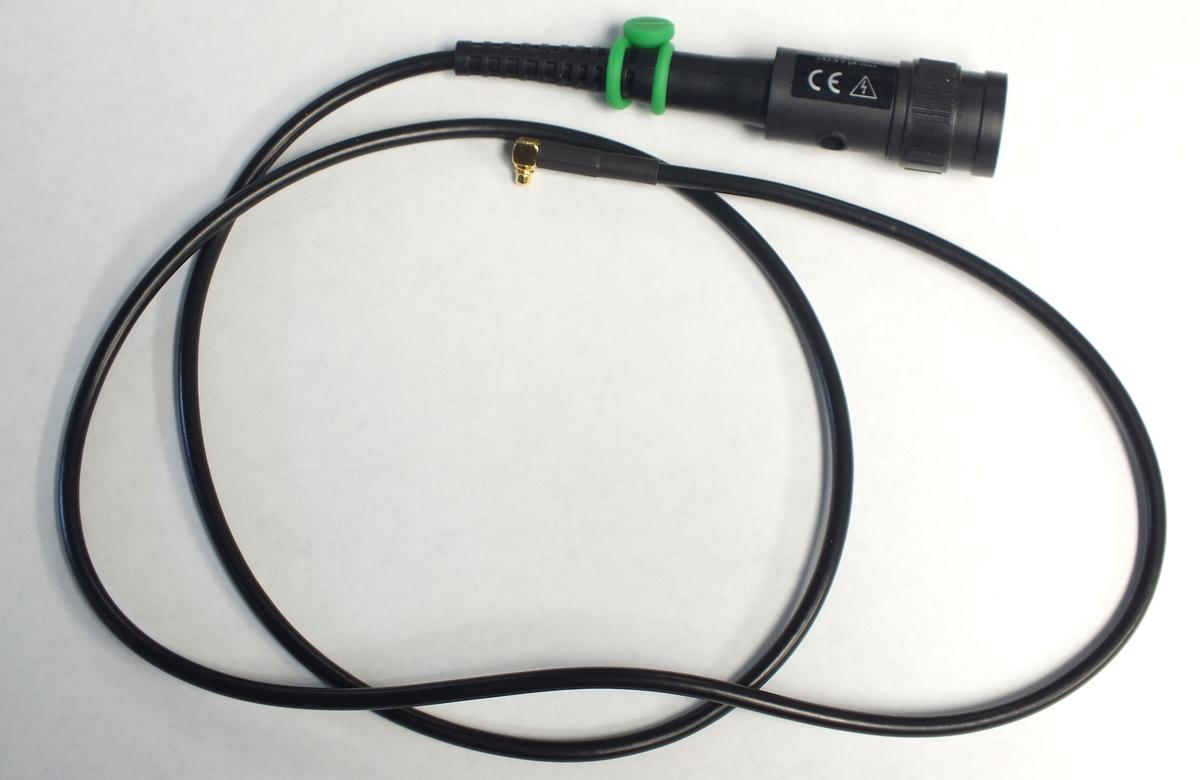 Image 3. Cable for the oscilloscope interface

Image 5. Another view on interface

The probe comes with a relatively basic accessory kit: a small screwdriver for adjusting compensation, a micro-grabber for grounding, eight color-coded rubber straps for securing the probe cable to the positioner arm, and two different sized wires for connecting the ground lead. No insulating tips for the pogo pin, or alternative grounding accessories, are provided.

Most notably, there is no spring or pin ground suitable for connecting to a test point, adjacent IC pin, decoupling capacitor terminal, or other ground point which cannot be grasped by the micro-grabber. SensePeek’s SP10 probe (a straight-through 1x probe intended for use with multimeters or power supplies) may be used as a ground lead for the SP200 and connected via the same cables used for the micro-grabber at the cost of some additional inductance. The long ~18 inch wire supplied with the SP10 is not recommended for use as a ground lead due to its significant inductance; even at a few MHz massive ringing was present in testing.

The first test used the micro grabber and the provided long ground wire. 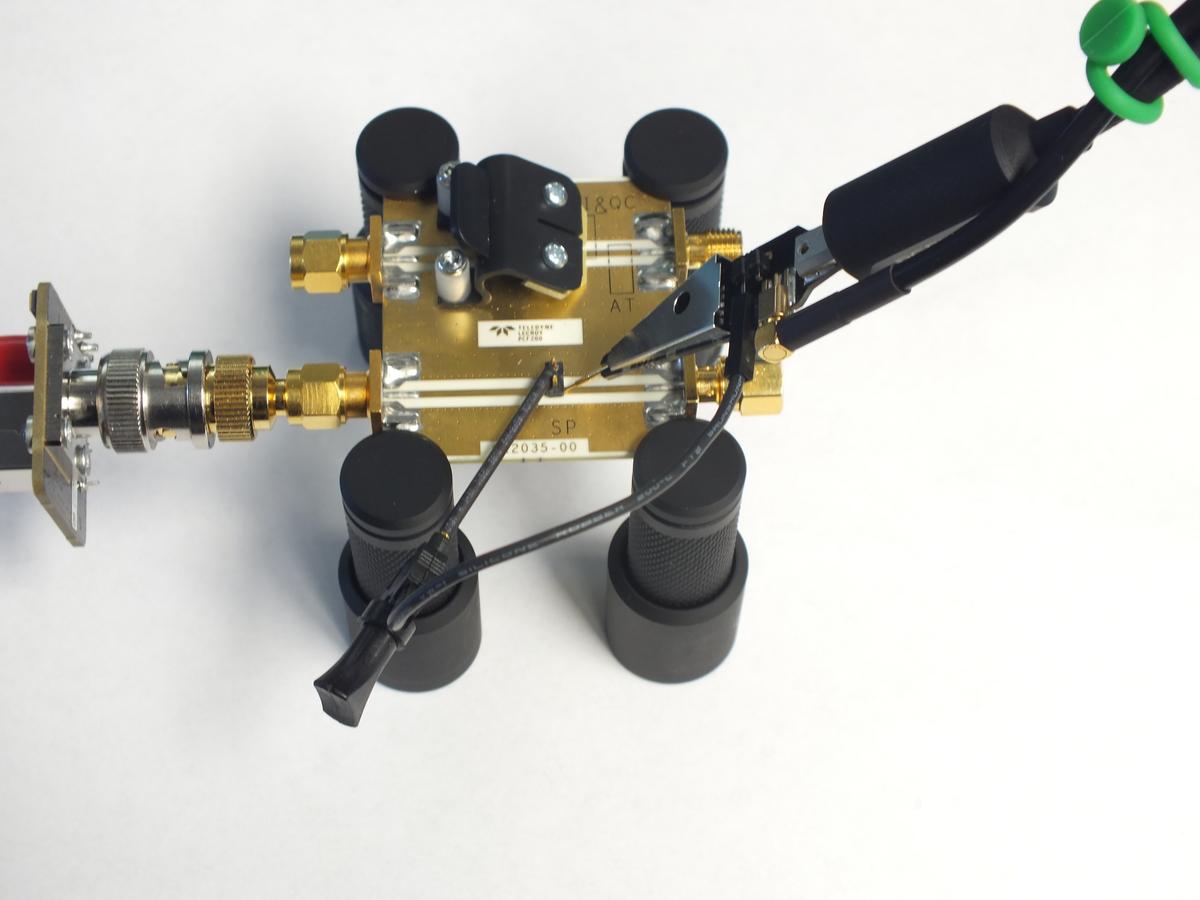 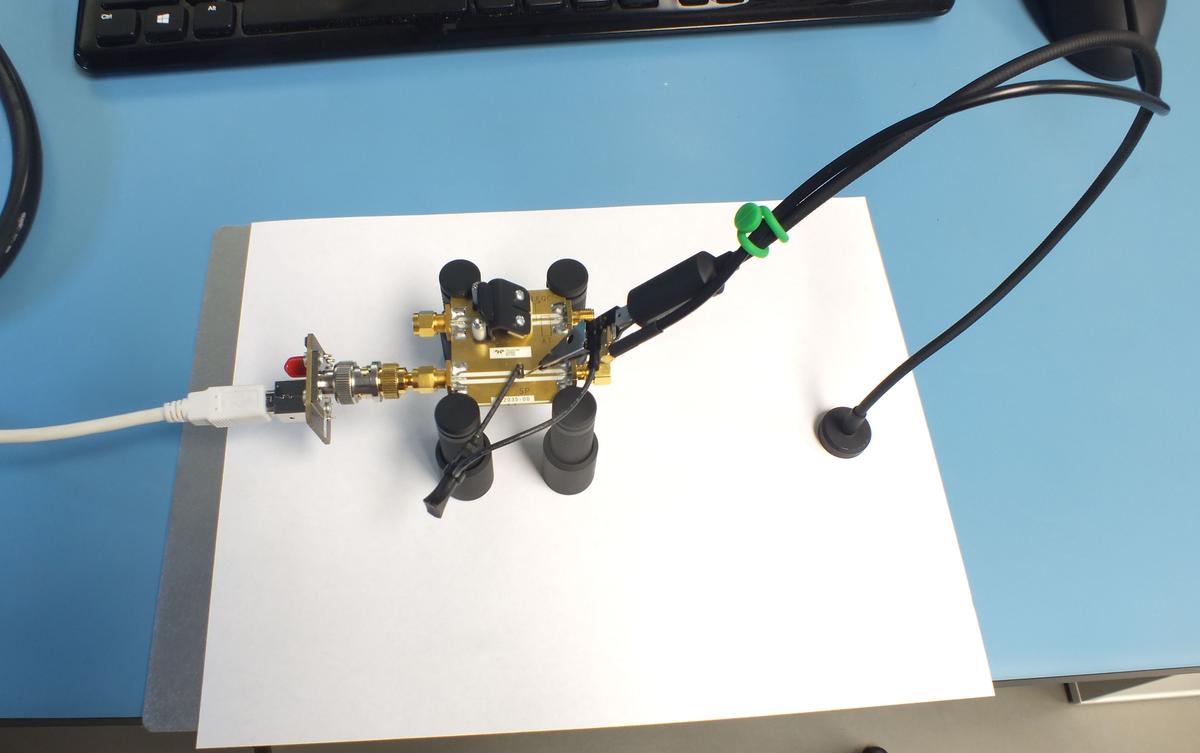 Unsurprisingly, significant overshoot (25% of p-p) and ringing was observed from the ground inductance of long lead. 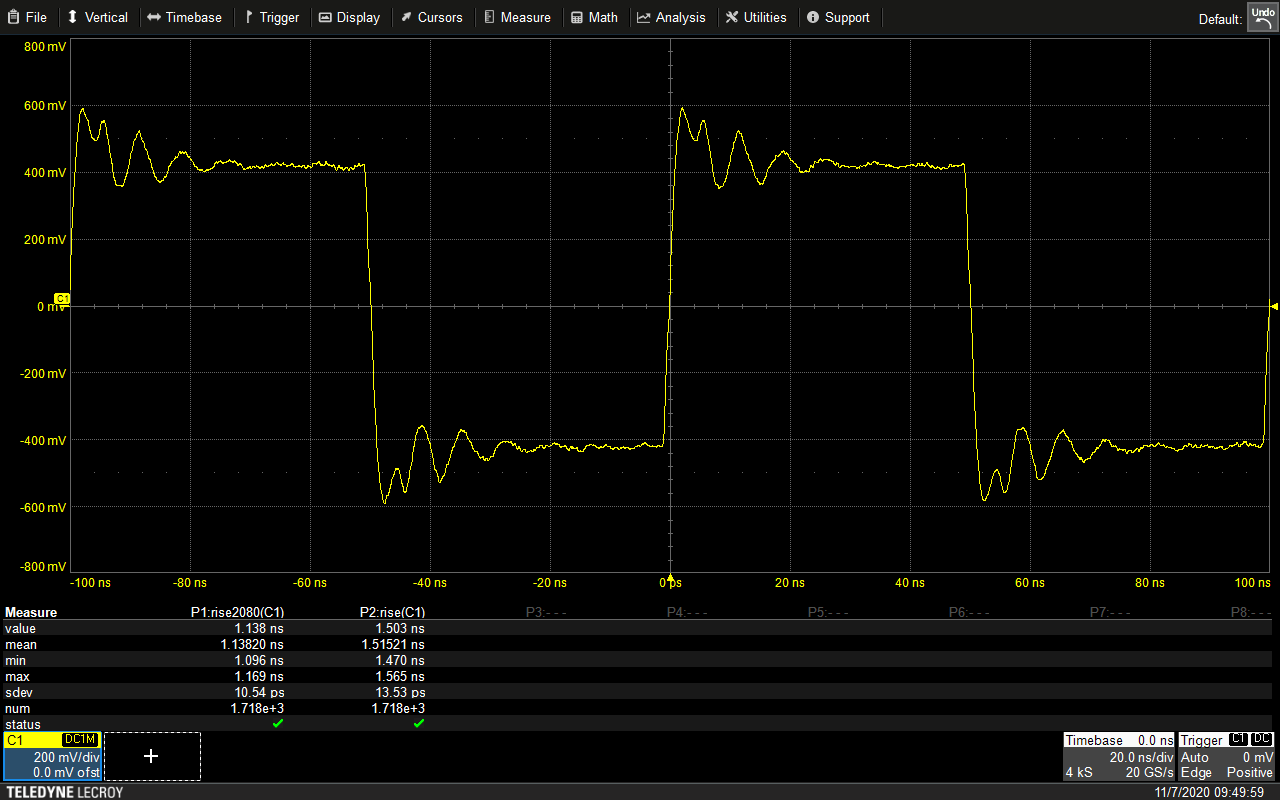 Although it was not possible to perform full 2-port VNA measurements because the probe output expects a 1M ohm load rather than a 50 ohm VNA input, scalar S21 measurements were obtained by sweeping tones generated by the VNA across the probe’s operating range and measuring amplitude as seen by the oscilloscope. This curve is normalized to a nominal 0 dB at 10x attenuation, i.e. the amplitude displayed by the scope exactly matches the input signal. Significant artifacts from ground lead inductance are readily apparent in this plot.

Input impedance showed the usual sharp drop-off as typically seen with an R-C passive probe, reaching approximately 1K ohms around 10 MHz, 250 ohms at 50 MHz, and 100 ohms at 100 MHz. Multiple huge spikes in impedance were present due to ground lead inductance. 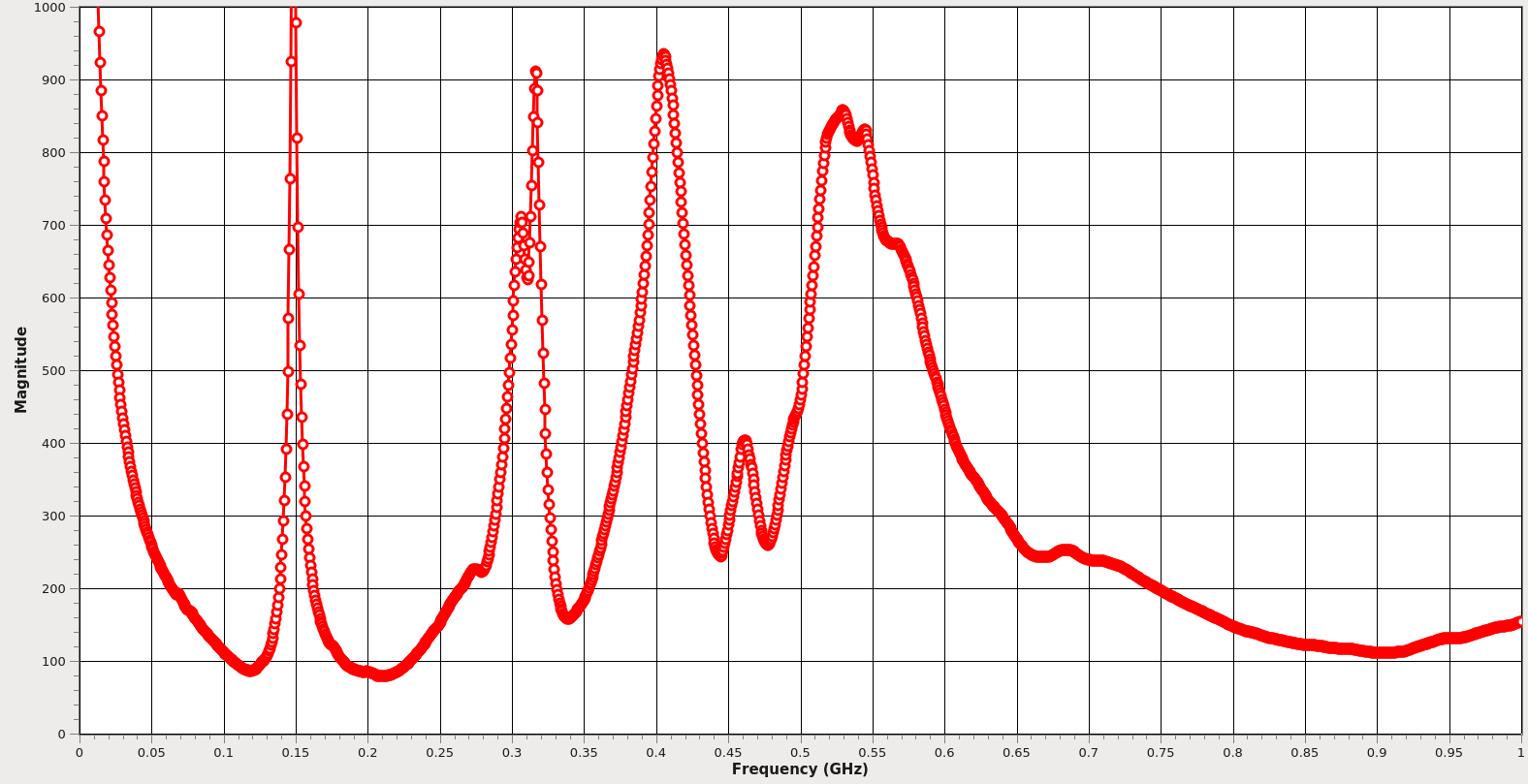 The second test used the short ground wire. The ringing damped out noticeably faster, but there was less of an improvement than expected. 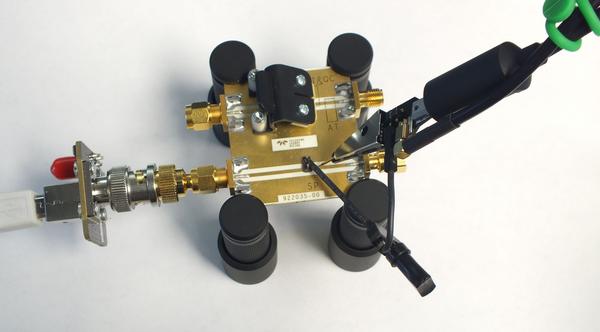 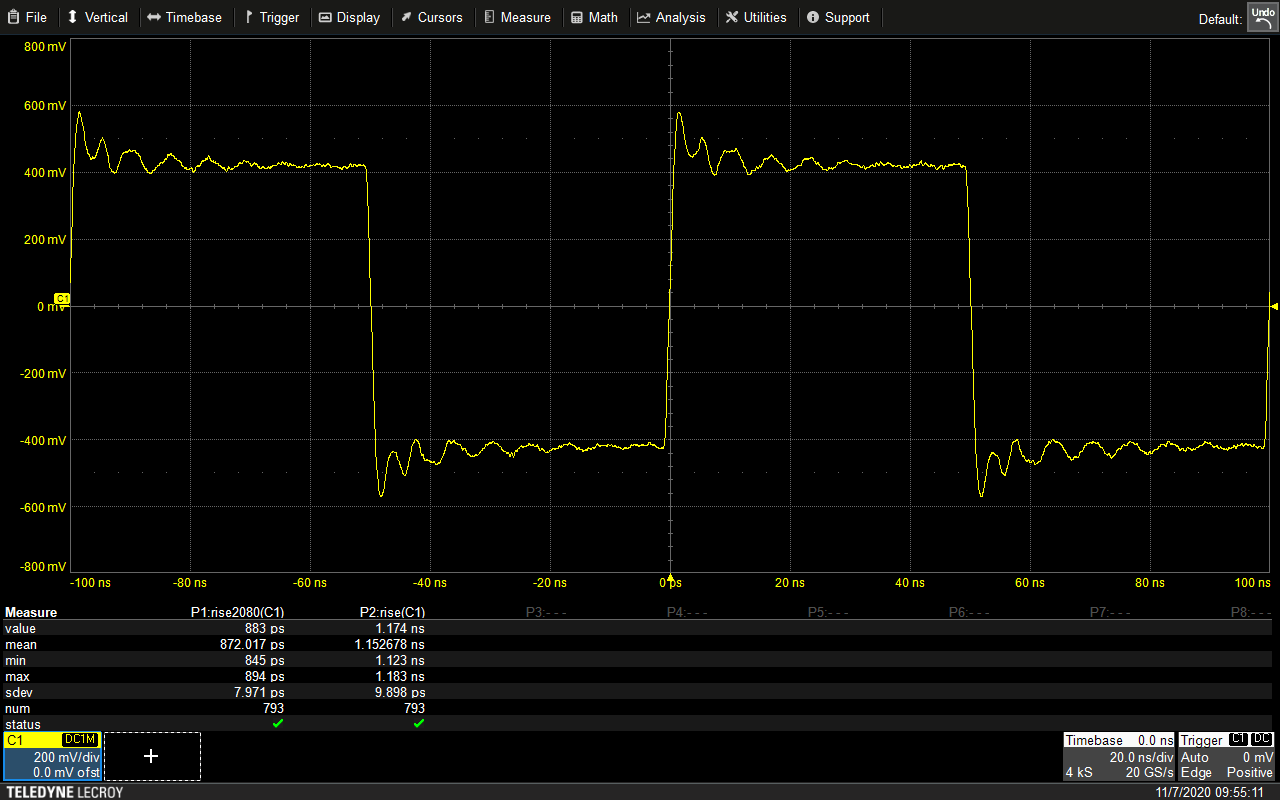 It did improve results only a little bit.

To see if the micro-grabber was the limiting factor in probe performance, a short length of wire was directly clamped to the board as the ground. 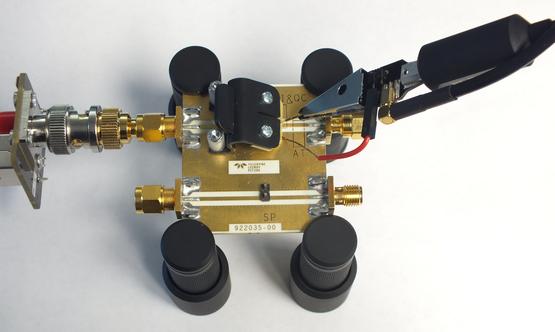 Image 14. Connection for ground without grabber use

This can be easily improvised and does not require modification of the probe head, was but again was only slightly better than the stock ground lead. 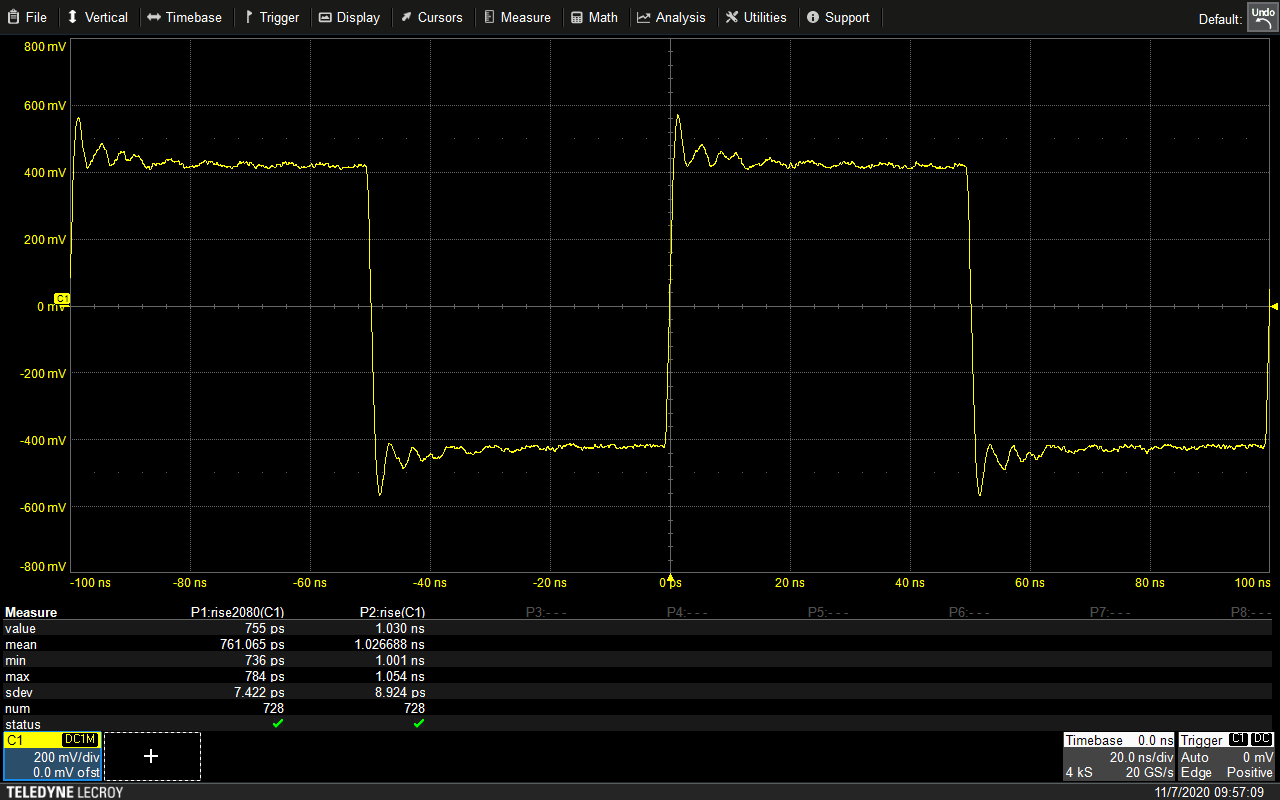 The best results as expected were obtained by soldering a short length of 20 AWG solid copper wire to the grounded shield can around the probe tip. With this simple modification, the response flattened out significantly and the -3 dB bandwidth was increased to approximately 375 MHz. 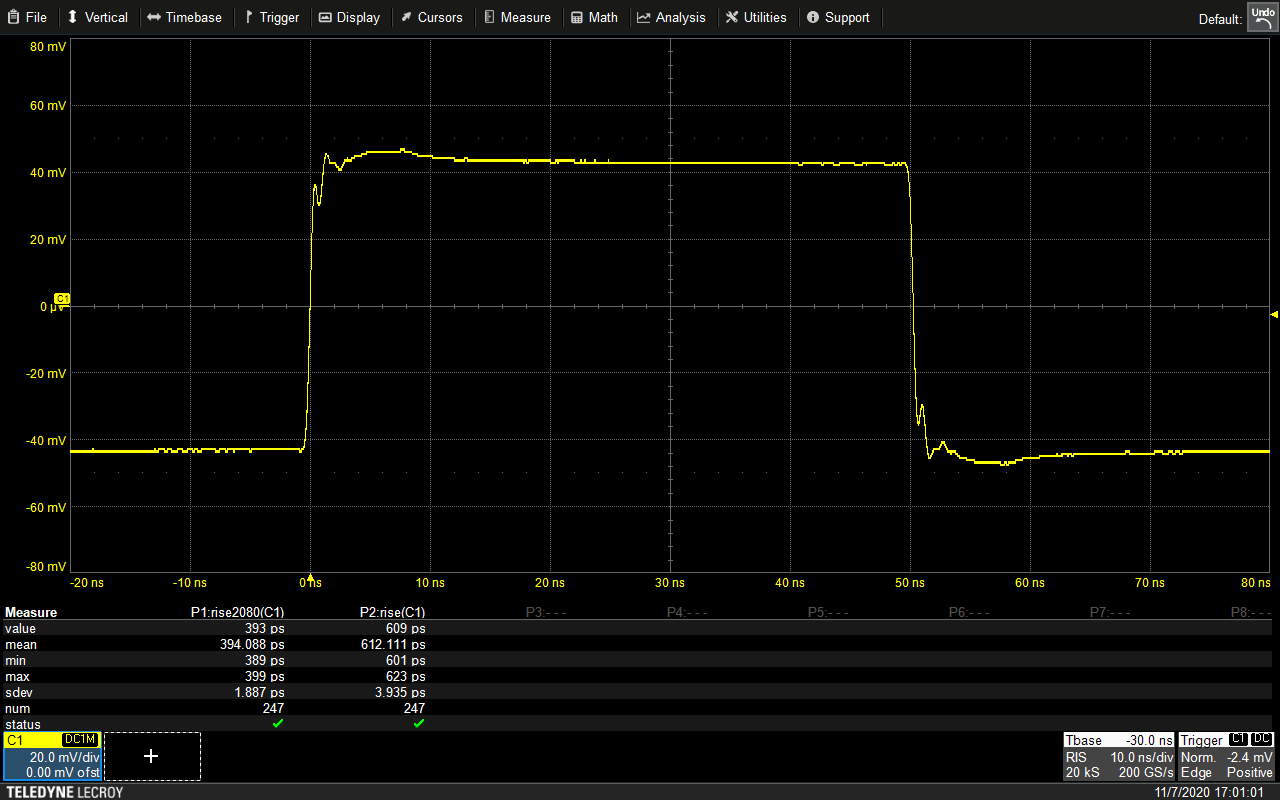 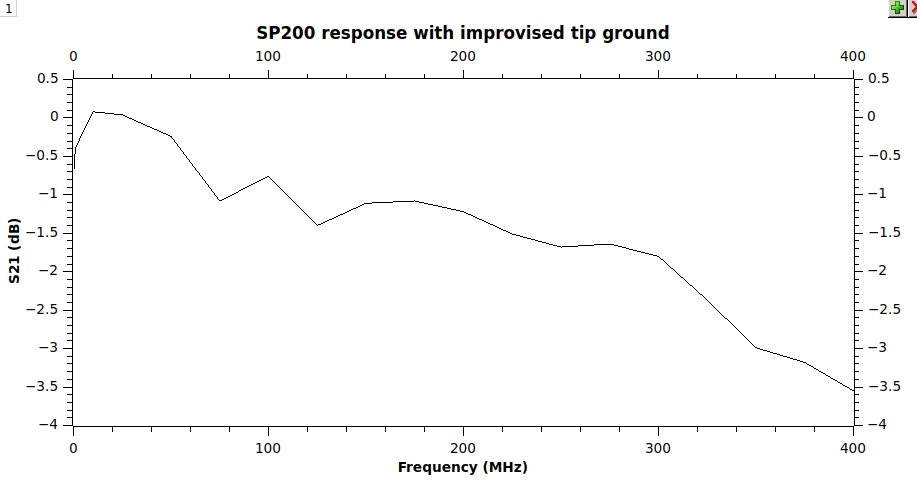 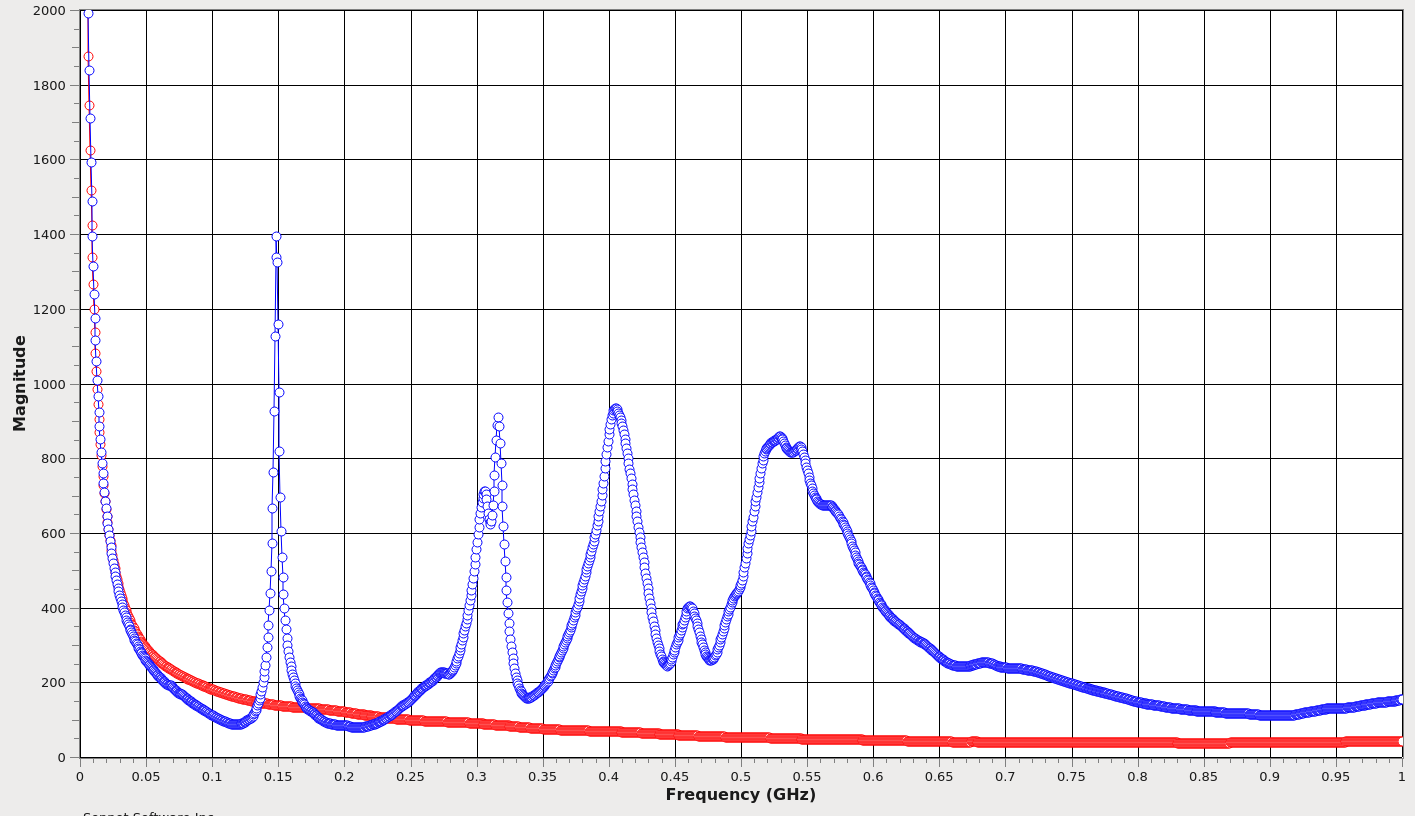 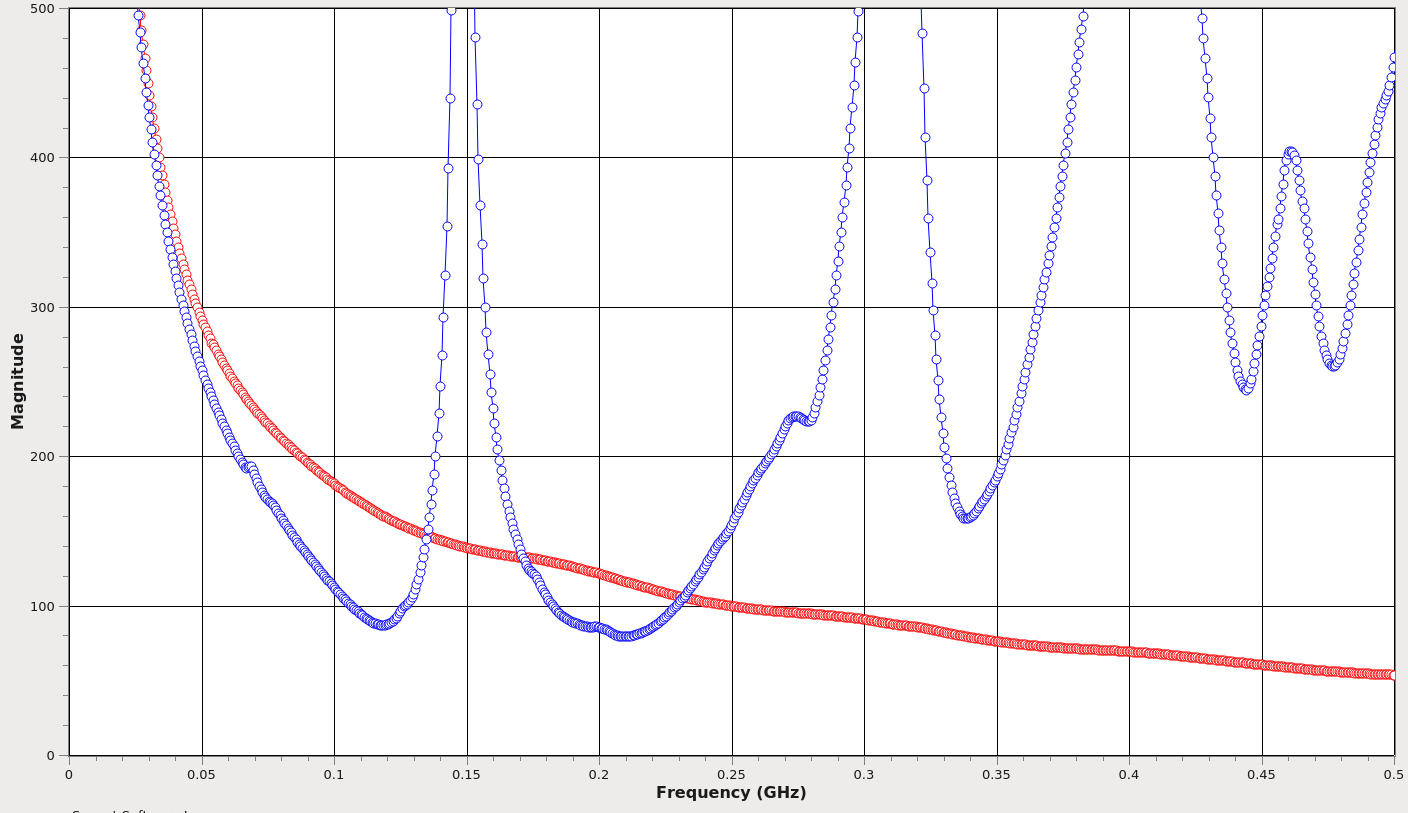 Image 20. Modified probe zoomed in measurement from DC to 500 MHz

The SP200 is a decent value for the money. It definitely can’t compare to high-end passive probes from vendors like Tek, Keysight, or Teledyne LeCroy… but you can also buy five SP200s, including positioners, for the price of something like a LeCroy PP023.

The SP200’s biggest weakness is the scarcity of grounding options. No low-inductance ground is provided, which severely limits its utility for anything with remotely fast edges. An easily DIY-able low inductance ground largely mitigates this problem, however.

A permanently installed socket for a stiff wire ground lead which can swivel to adjust tip-to-ground spacing, similar to the Z-ground used on the LeCroy ZS1500 or PMK Tetris probes, would provide good electrical performance and easy connection to test points with variable distance from ground. Perhaps SensePeek should consider an upgraded edition of the probe with this as an added feature.