The Picotech TA061 is a 500Ω || 2 pF passive oscilloscope probe with a fixed 10:1 attenuation, 1.3 meter cable, and 2.5mm diameter. It is a DC coupled transmission line probe, designed for use with instruments that have 50Ω matched inputs. The datasheet specifications state 1.5 GHz bandwidth and 240 ps rise time.

The TA061 has a SMA connection to the instrument. Its sister model, the TA062, is identical except for having a BNC connector.

The TA06x probes appear to be rebranded PMK products. The original PMK model for the TA062 is PML751 (part number 875-751-000) however a quick skim of the website did not show an SMA version so the TA061 may be a custom variant for Picotech. PMK model PML751-RO (875-751-001) is identical to the TA062/PML751 except for having an ID ring with resistor so that oscilloscopes can auto-detect the probe attenuation.

Unlike conventional R-C divider probes, the TA061 and most other transmission line probes do not have a compensation adjustment. The hand-piece terminates in a standard brass SMA connector with no attachment point for a color-coding ring, however the handpiece does have ring holders. 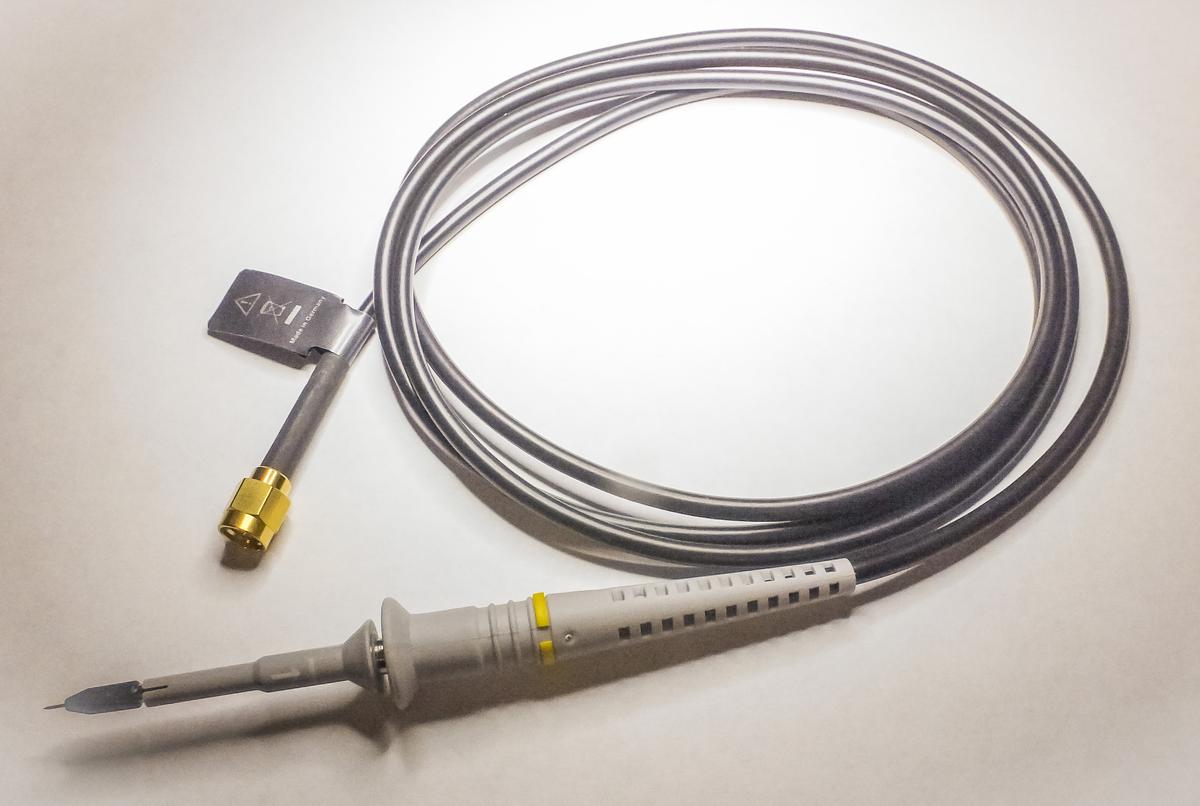 The alligator-clip ground has a fairly typical “snap” design which can be mated to the probe barrel without removal of any tip accessories. The end of the clip is flat with small ridges rather than the more typical “W” shaped teeth, which may be better for grabbing small wires or test loops. 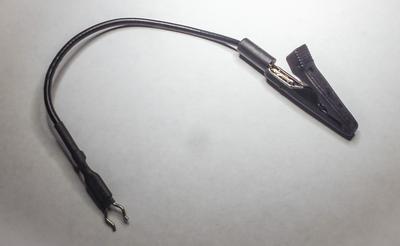 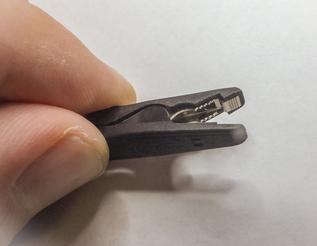 Other accessories provided include the usual spring ground, an assortment of insulating caps for probing IC pins, a snap hook, a brass ground blade, and a small square of copper tape. The tape is intended to be stuck to the top of an IC package and jumpered to ground, so that the probe may be poked against a pin while the blade grounds the probe to the copper square, 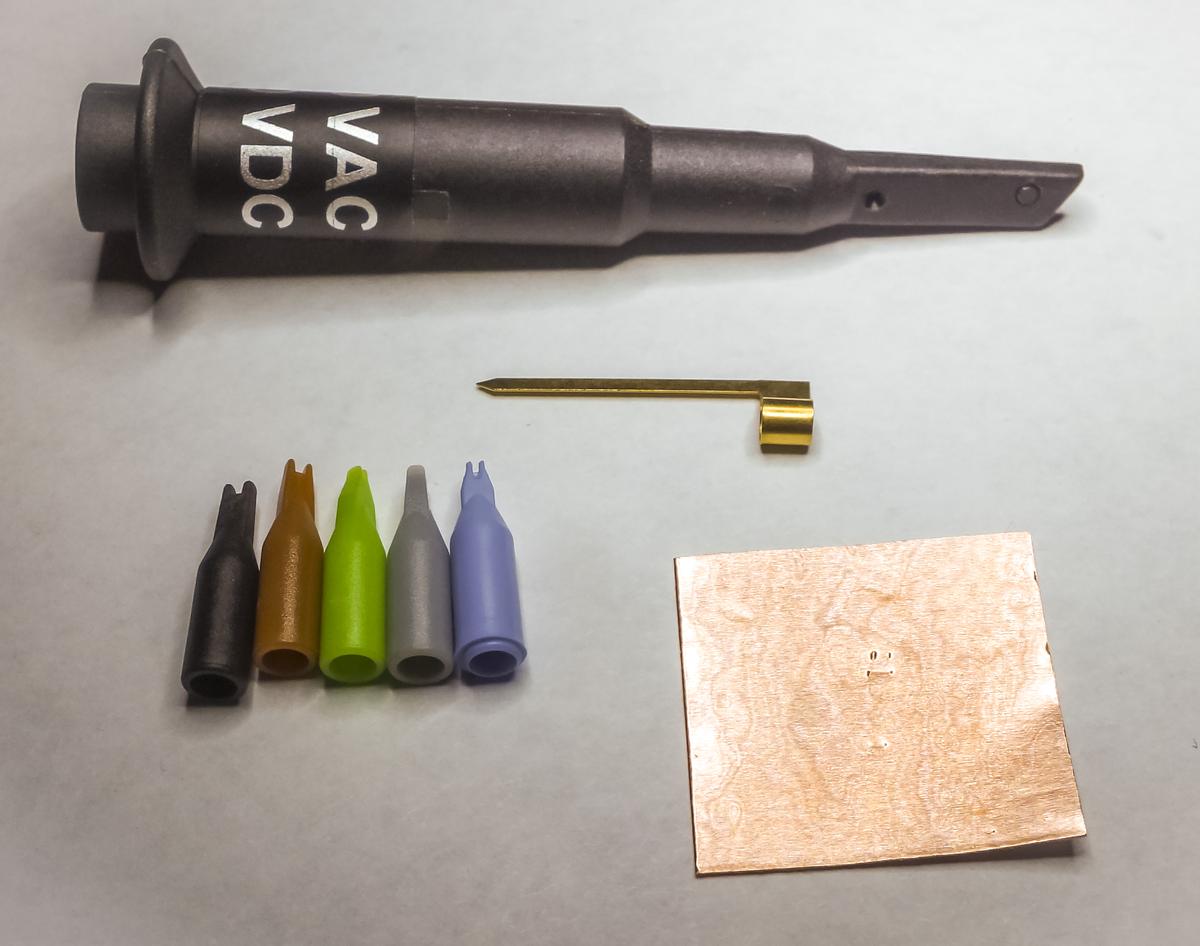 The probe has a coaxial design with an outer ground sleeve, a polymer dielectric (most likely PTFE based on general appearance), and a center signal contact. Both solid BeCu needles and gold-plated pogo tips are offered.

The standard accessory kit includes one of each, plus a pogo tip installed in the probe from the factory. A protective cap is also supplied, which may be placed over the tip when not in use to prevent operator injury or damage to the tip. 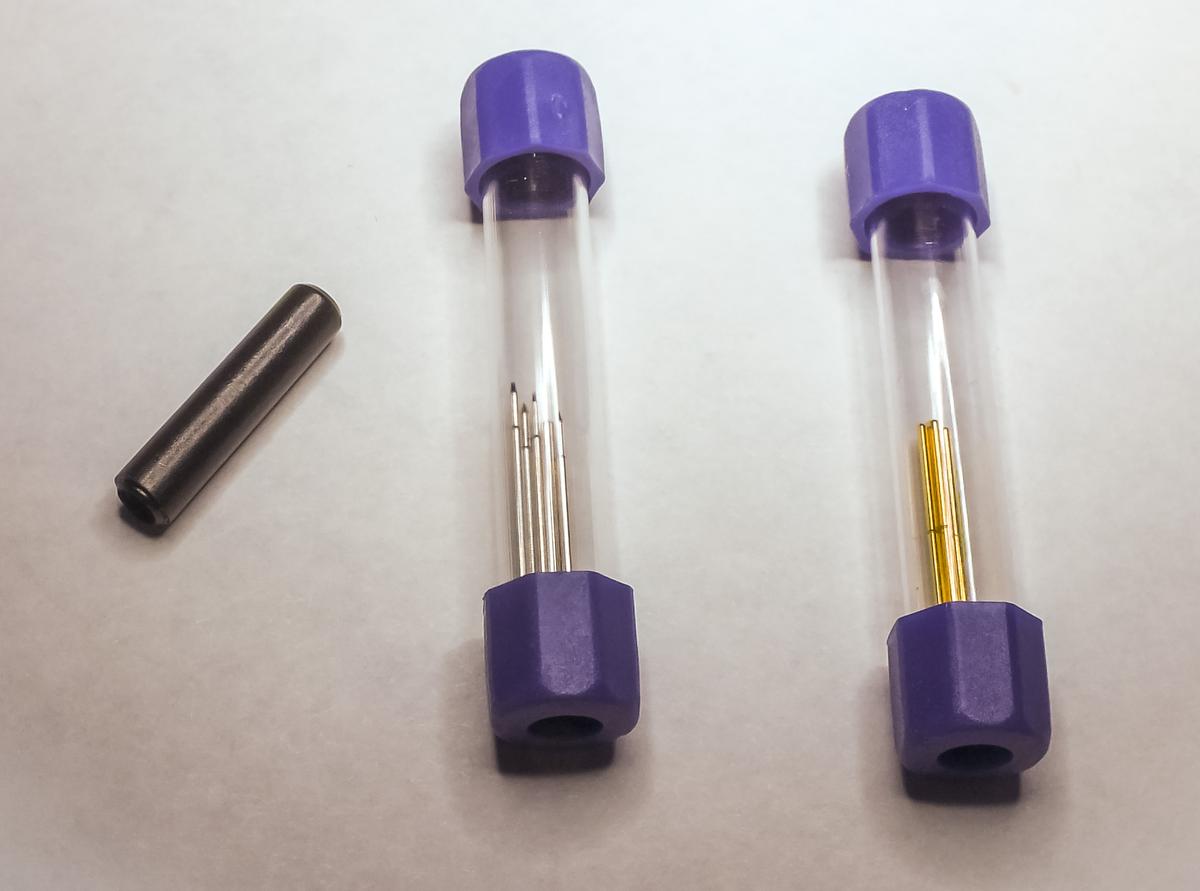 The probe was connected to the oscilloscope using a Rosenberger 32K151-S00L5 SMA-BNC adapter and used the flat ground blade and pogo tip.

For time domain measurements the pulse generator was connected to the test fixture using a Pomona BNC-SMA adapter and a 3-inch semi-rigid coaxial cable (Crystek Microwave CCSMA-MM-086-3). Waveforms were collected with the probe placed across a 50Ω termination on the fixture.

Extreme overshoot (nearly 20% of overall signal amplitude) was visible on the rising edges of the signal. The observed rise times averaged around 270 ps, noticeably slower than the 240ps typical datasheet value. 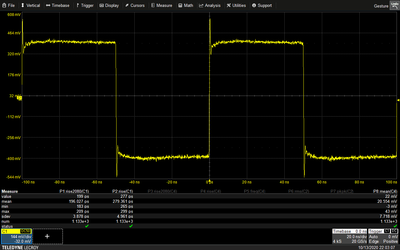 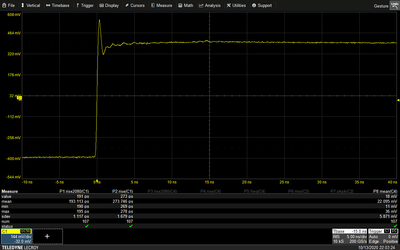 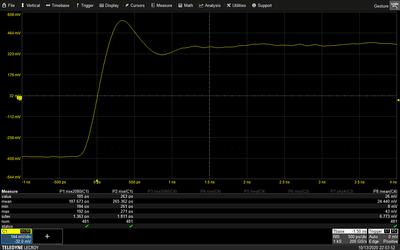 With the probe across a 50Ω termination on the fixture (( TA061 S2P-file across terminator ), very poor flatness was evident in the S21 curve. At only 100 MHz, the response is 1 dB below the nominal -20 dB. Starting at 500 MHz a huge peak was present, reaching nearly 2 dB above nominal at 890 MHz. The response then falls off sharply, reaching 3 dB of loss at 1.21 GHz – well below the 1.5 GHz datasheet bandwidth limit. 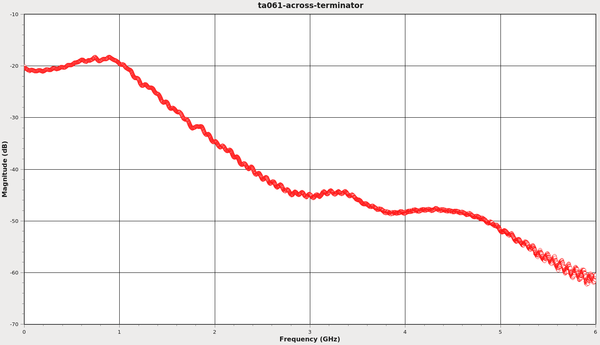 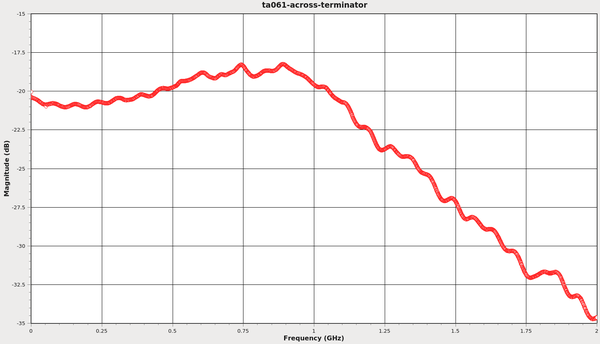 With an ideal 500Ω load at the end of a 50Ω line, one would expect about -1.5 dB of return loss. The TA061 performed significantly worse ( TA061 S2P-file across open ) than this, with a massive dip in the response reaching about -13.4 dB at 1 GHz. This suggests that, far from being a minimally invasive probe for high speed signals (as expected from a transmission line probe), the TA061 is likely to cause significant degradation of signal quality on the DUT. 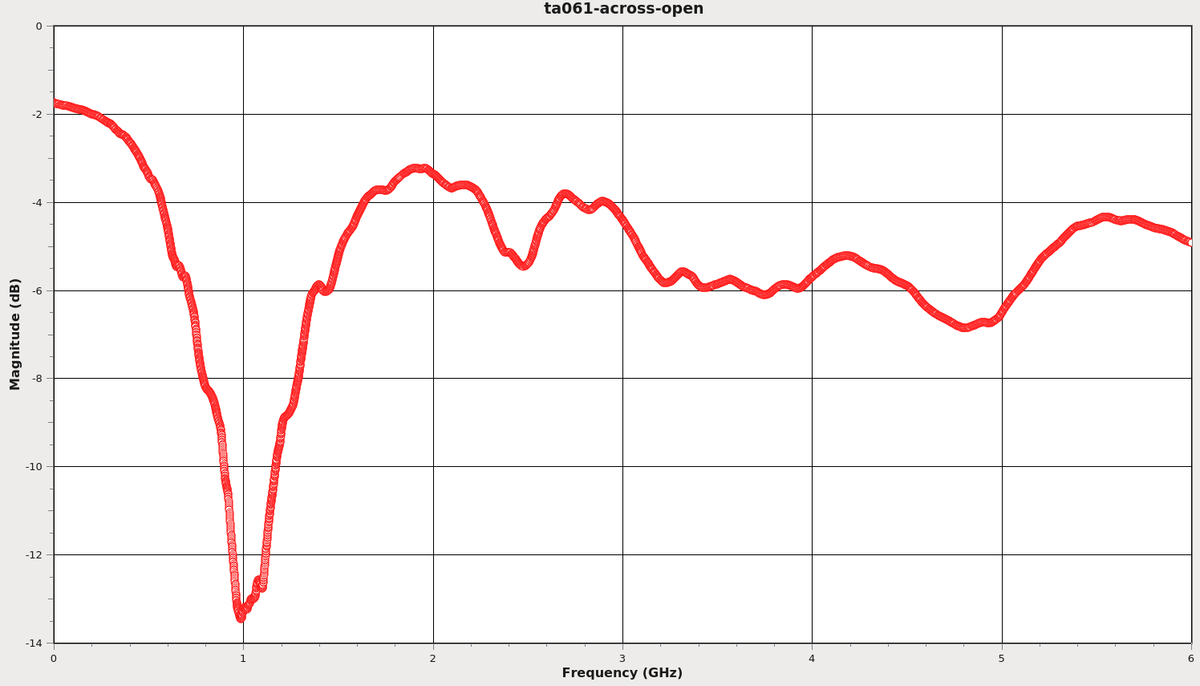 In order to confirm this, time-domain measurements were taken with the probe across a short length of grounded coplanar waveguide. A 1.25 Gbps 8B/10B pattern was applied to one end of the line while the other was connected to the oscilloscope, and measurements were taken with and without the probe present. A large dip can be seen on the edges of the loaded signal (C2) when compared to the signal without probe loading (M1/M2). The transmitted signal (C4) also shows significant overshoot. 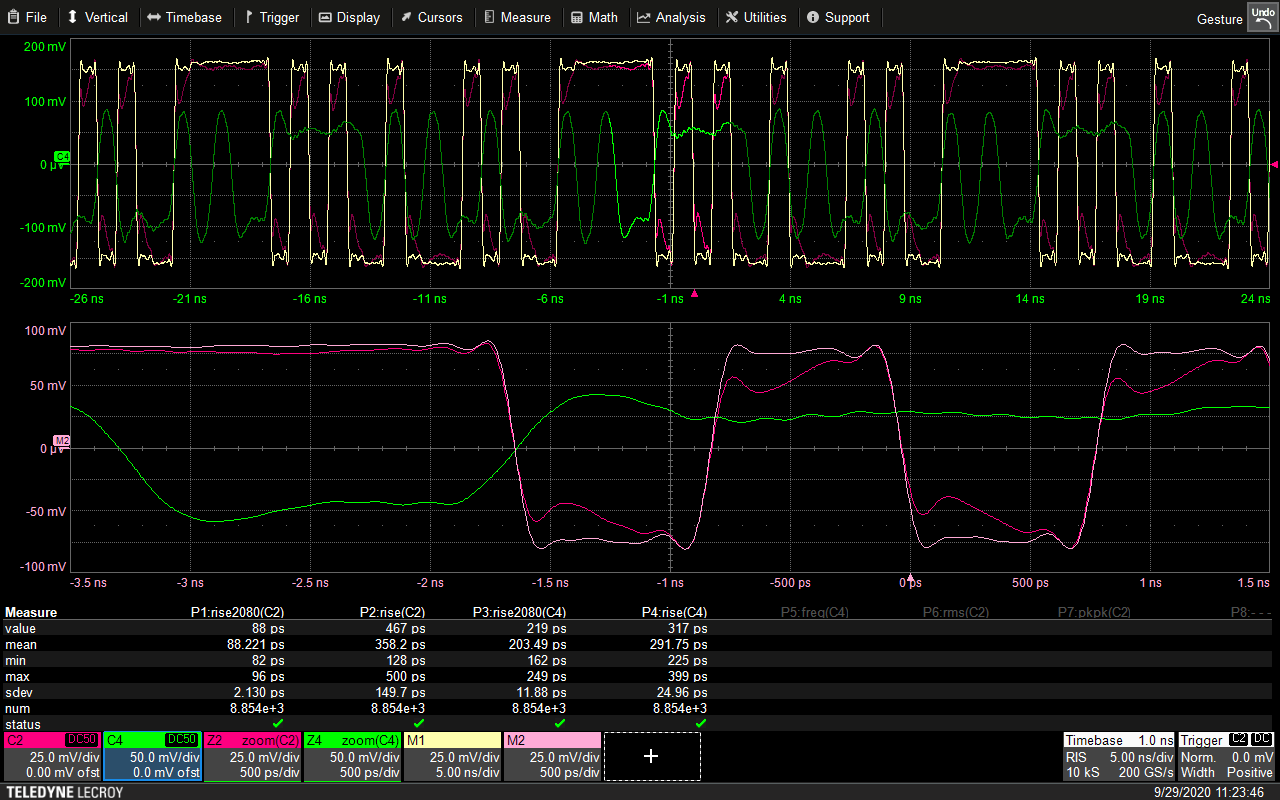 Overall I was very disappointed in the quality of the probe and wish I had done this testing before buying four of them. The TA061 is now the least used probe in my lab as it is objectively inferior: for every type of measurement I need to take, something else is a better choice. The TA061 has the high DC loading expected of a transmission line probe, but doesn’t redeem itself with flat response or low loading at GHz frequencies.