Front panel (the only area available to user when module is installed in logic analyzer mainframe) have four input channel ports, each having 34 channels. There are four LED indicators to display current condition of module (Ready, Accessed, ARM’d, TRIG’d). Our TLA7AA4 was in CS option configuration, which allows 8GHz Timing speed and 450 MHz state speed, with 2M depth of memory.

There are other modules in series such as:

Module chassis is made of aluminum and heavily perforated from sides to allow air flow thru mainframe.

Back connector is coupling to TLA’s VXI bus via four connectors. VXI address is set via rotary switches on backside of module as well.
Module side have merge connector, which allow to combine multiple modules together for united triggering and channel grouping.

Compression type probe heads, such as P6860 do not require PCB connector, and mate directly to pads on PCB. Probe is fixed by pair of 2-56 nuts on opposite board side. This is great way to save on debug connectors and avoid BOM increase due to debug requirements.

7AA4 have two main PCBs, similar separated architecture to 7000 series oscilloscope, with acquisition board to handle all raw data processing, storage and triggering and digital PowerPC board running VxWorks 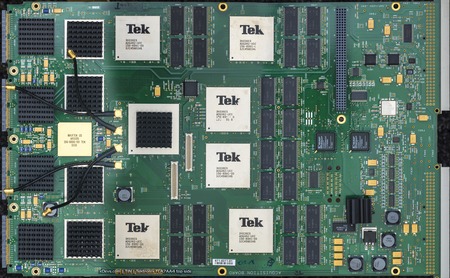 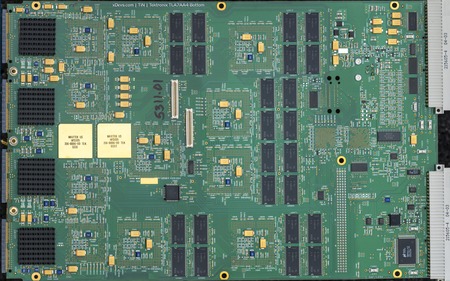 Both side photos captured in 64 Megapixels and are available in very high resolution for your enjoyment. Main acquisition board is 14-layer beast with lots of unobbtanium Tektronix ASICs and lots of memory.
Golden MAXTEC HFD105 ASICs in center are likely handling multiplexing logic analyzer channels for analog BNC outputs. 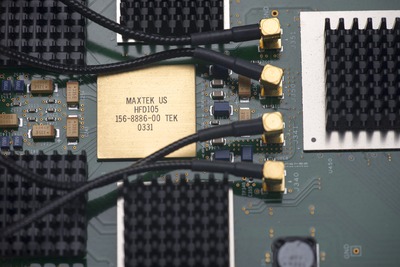 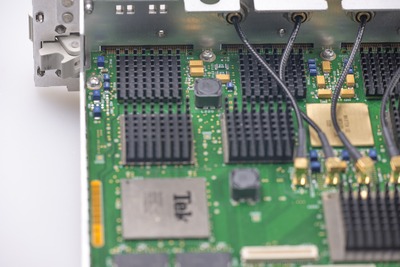 The probe interface consists of ASICs that receive data from the probes, compare the data against a threshold, and transfer the digital information to CMOS ASICs via differential outputs. Each ASIC in the probe interface receives 16 data channels and one clock channel.

Clocking and triggering is controlled by a single ASIC U450. This ASIC determines when acquisition data should be sampled based on the clock information and qualifier information. The ASIC also contains 16 Event resources for the purposes of word recognition, range recognition, and other trigger functions. In merged configuration, the ASIC communicates information between modules to ensure proper triggering. 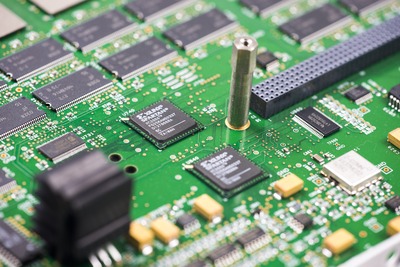 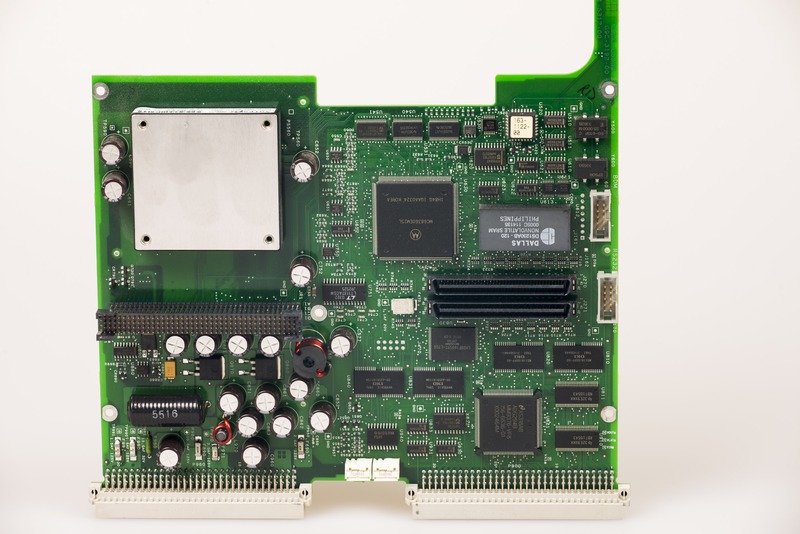 Local Processor Unit board using Motorola MC68360EM25L. According to Freescale’s documentation it is 32-bit controller that is an extension of other members of the Motorola M68300 family. The QUICC is comprised of three modules: the CPU32+ core, the SIM60, and the CPM. Each module utilizes the 32-bit IMB. The MC68360 QUICC block diagram is shown below 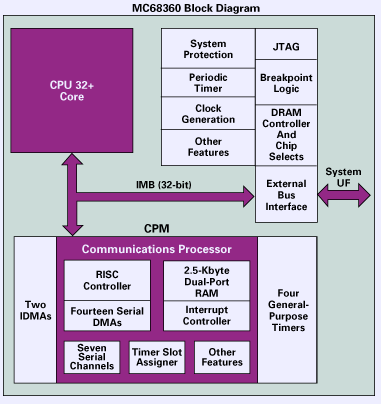 Other components around on digital module are: 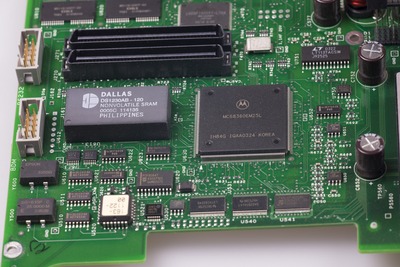 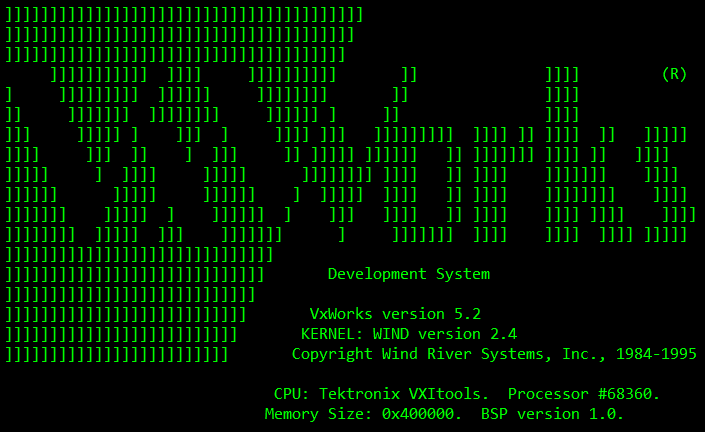 TLA7AA4 module using software keys to configure/lock their enabled memory amount and speeds. Hardware is well designed and capable for maximum capacity/speed, but can be often limited by software, to allow differentiation by price.

Here is reference table with possible options for TLA7AA1/TLA7AA2/TLA7AA3/TLA7AA4 modules:

During initial investigation it was possible to “unlock” full speed/capacity by simple replacement of on-board DS1230AB to DS1245, likely due to firmware bug or NVRAM addressing issue. 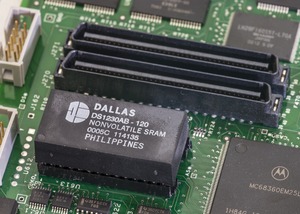 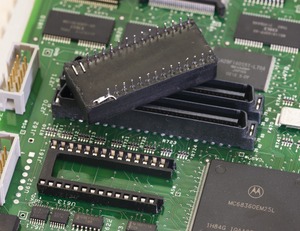 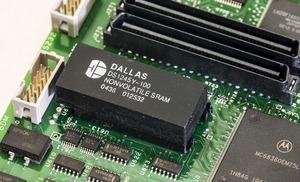 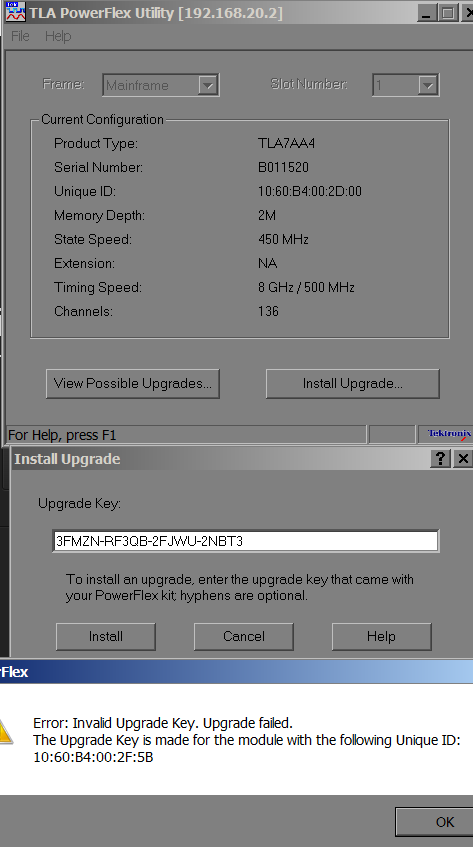 After replacement NVRAM to DS1245Y I’ve got this: 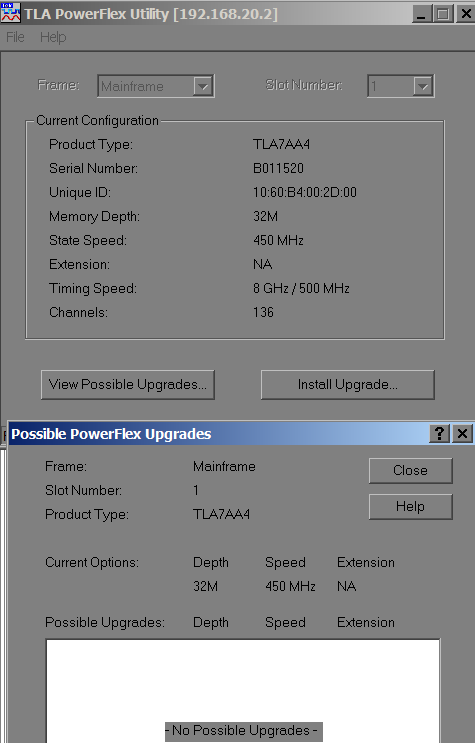 If you like this kind of review, or have any questions, feel free to discuss in comments.