Resistance standards with nominal value 10kΩ are quite a common tool in voltage and resistance metrology labs. This value is often used to perform artifact calibration on instruments such as 8½-digit HP/Agilent/Keysight 3458A or multifunctional Fluke 5700A/5720A/5730A 7½-digit calibrators.

I always wanted to make a 10 kΩ reference resistor myself and thought the hermetically sealed, wirewound Ohmite HS520A would be a good start [1] .

It features the following performance parameters:

Redistribution and use of this article, any part of it or any images or files referenced in it, in source and binary forms, with or without modification, are permitted provided that the following conditions are met:

If you willing to contribute or add your experience regarding instrument repairs or provide extra information, you can do so following these simple instructions.

The resistor case is made of a brass tube with glass sealed feedthroughs soldered to it at both ends. When the resistor arrived a first temperature measurement disappointed (see Figure 1). The measurement was performed with a Prema 5017SC and an incubator with Arroyo 5305 TEC controller. The result shows a linear part of α = 1.97 ppm/°C and quadratic component of β = 0.065 ppm/°C2, so the resistor got tossed for a while into the drawer, until I came across an article by lymex on bbs.38hot.net [2]. A translated English-version of this article can be found attached below. 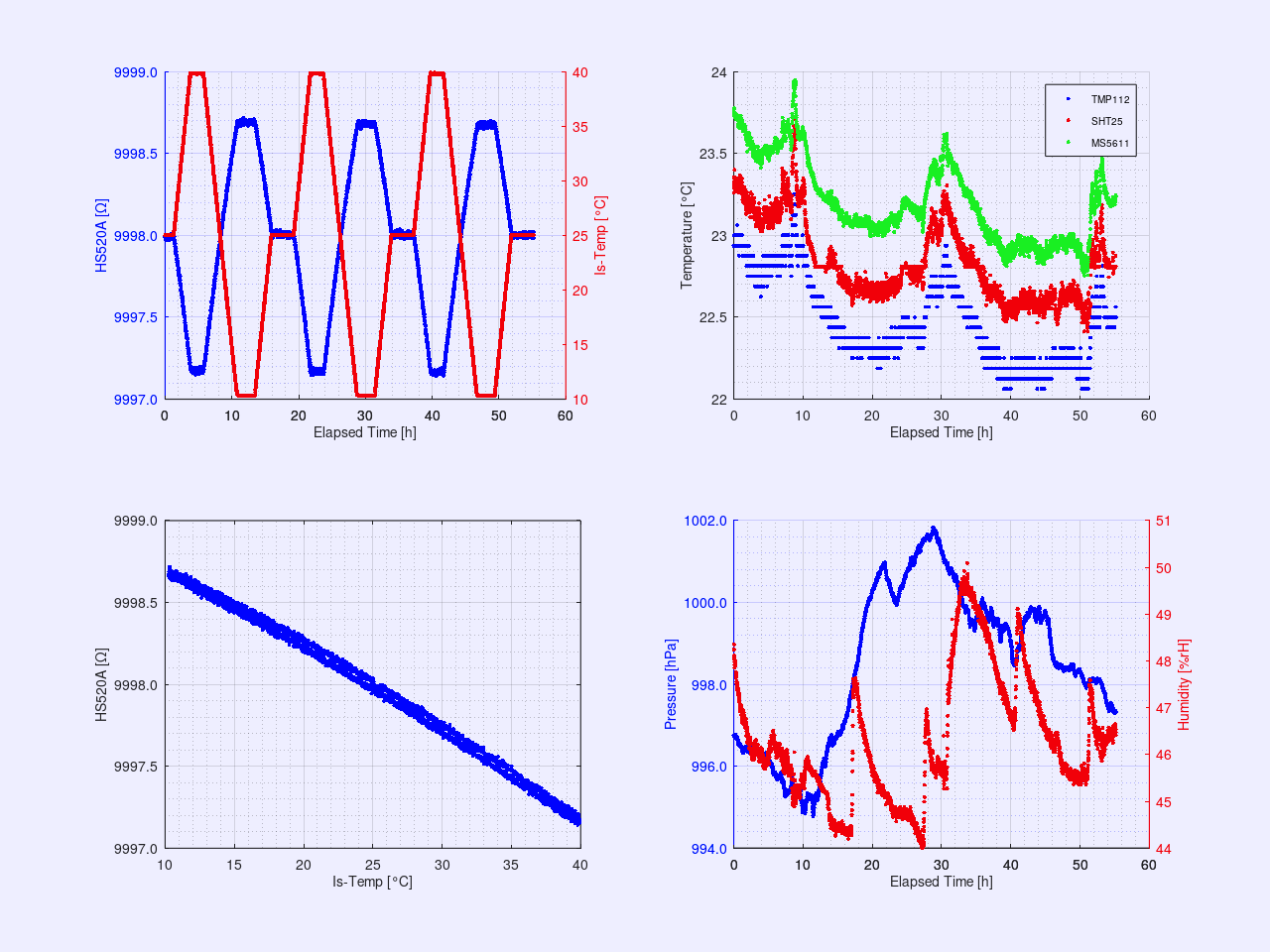 Figure 2. Design stage of the compensation network for α and β components 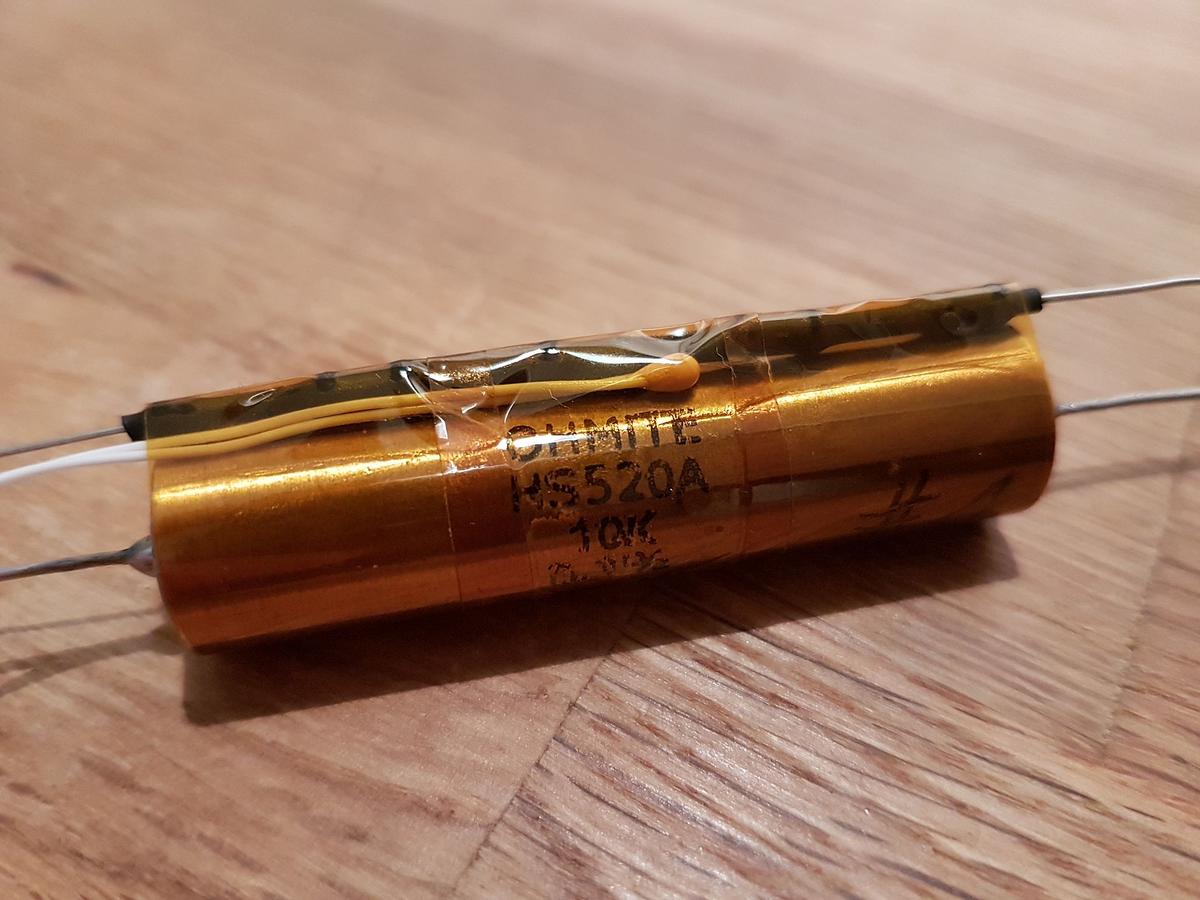 Figure 3: HS520A with series resistor and NTC in a heat shrink tube parallel and a thermistor as temperature sensor attached to it

An enameled copper wire of Ø0.16 mm was used for Rc and wound bifilar around the HS520A resistor case, again fixed with Kapton tape (see Figure 4). It compensates the negative linear component. 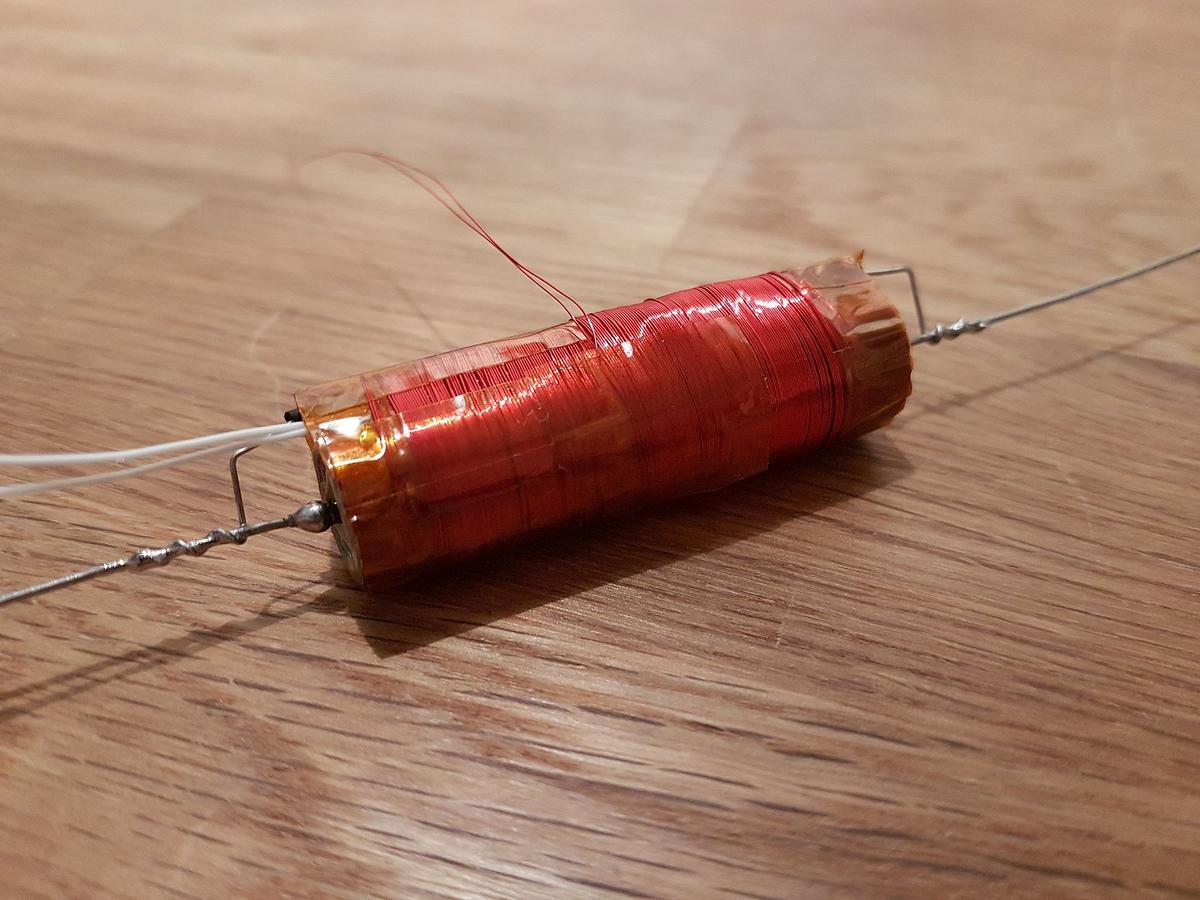 Figure 4: Resistor with copper wire resistor wound to it 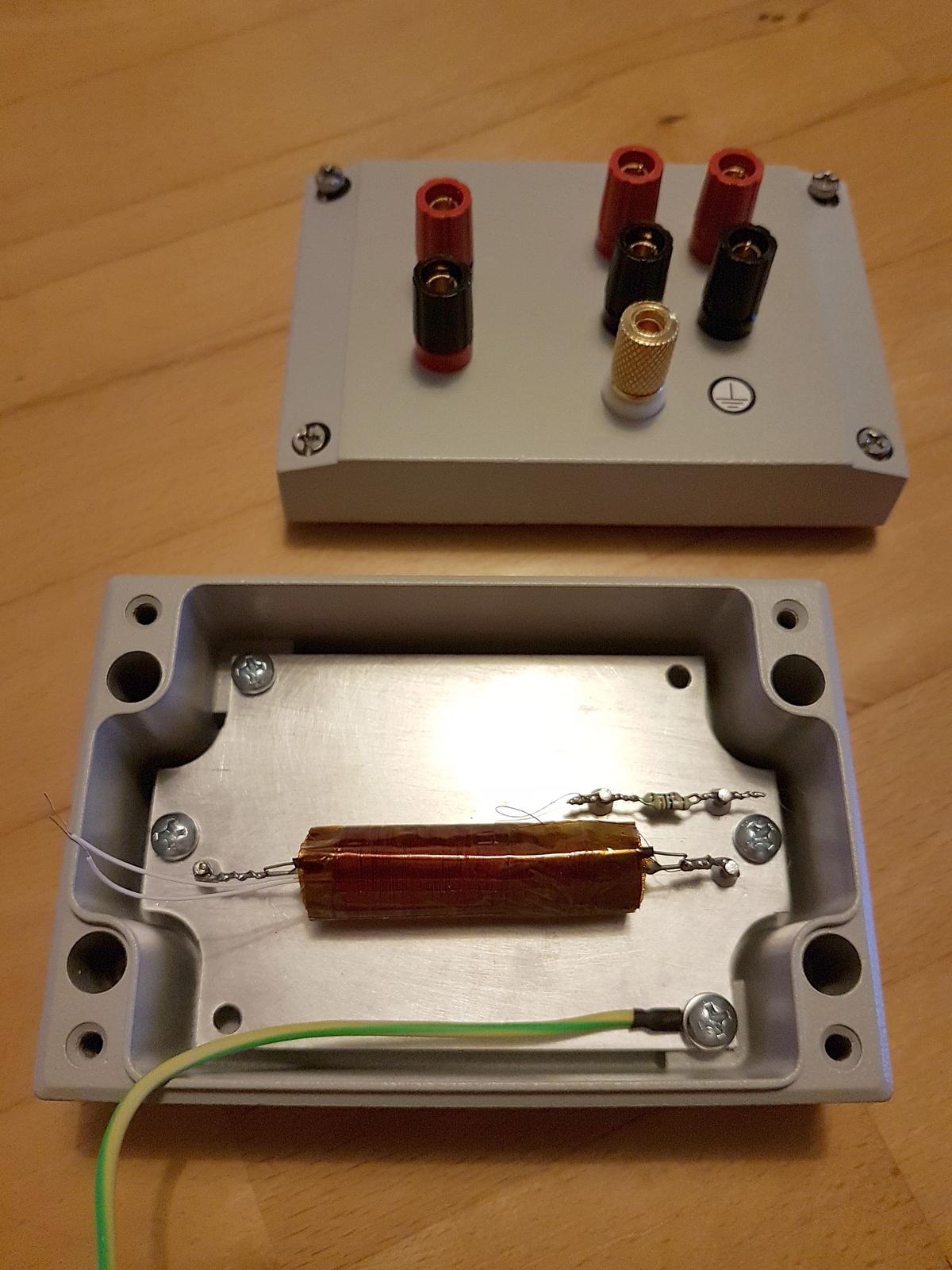 After everything was set up a new temperature profile was performed, this time using a Solatron 7081 in 7×9 mode with the already mentioned thermal chamber. This resulted in the behavior presented in Figure 6. For the measurements the drift correction was turned off and manually initialized before every temperature run.

Figure 6: Initial temperature measurement after setting everything up

From here the copper wire was then shortened by 10 cm and the temperature profile repeated. 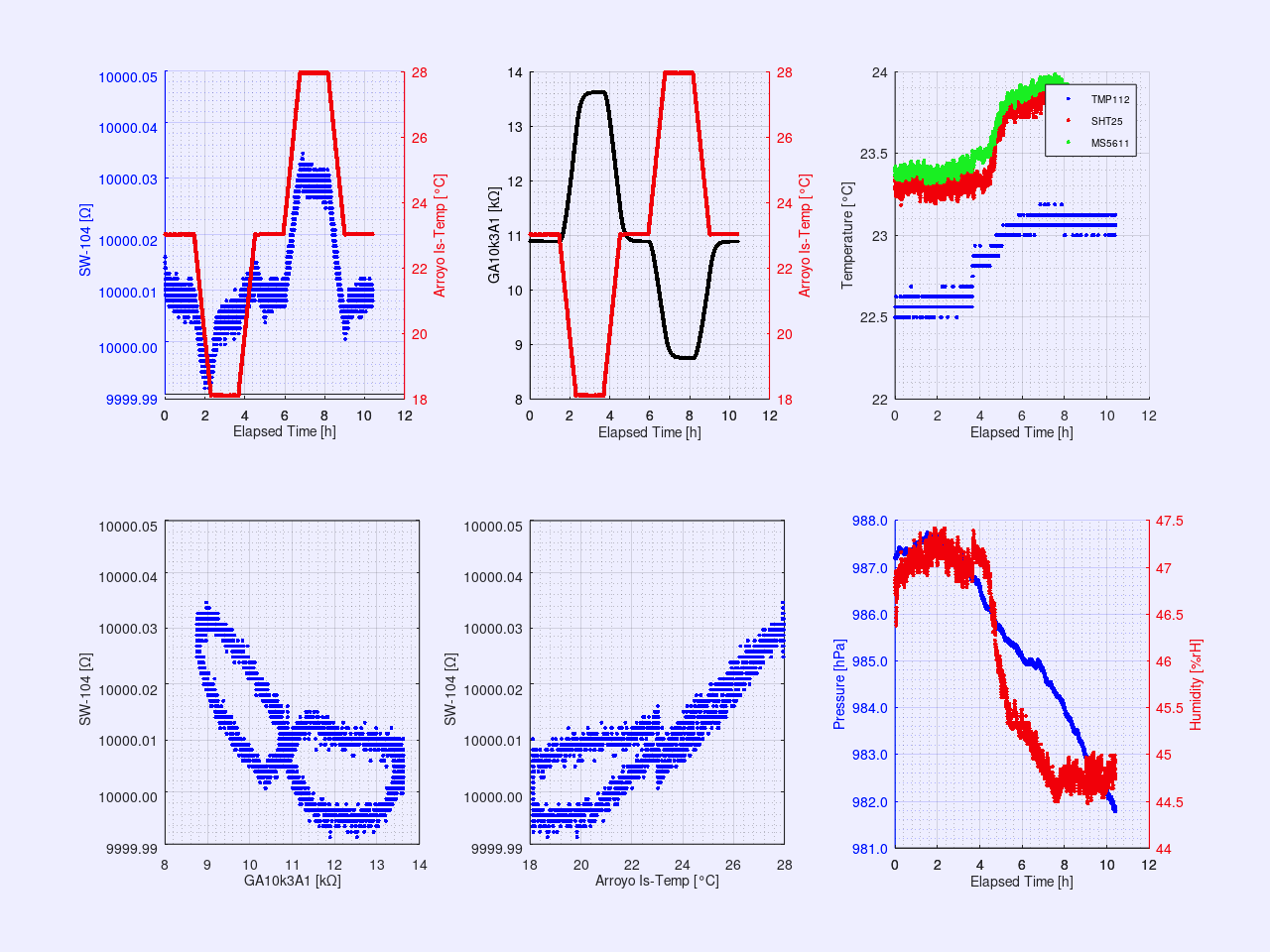 The copper wire was shortened by another 20 cm and the temperature profile repeated. 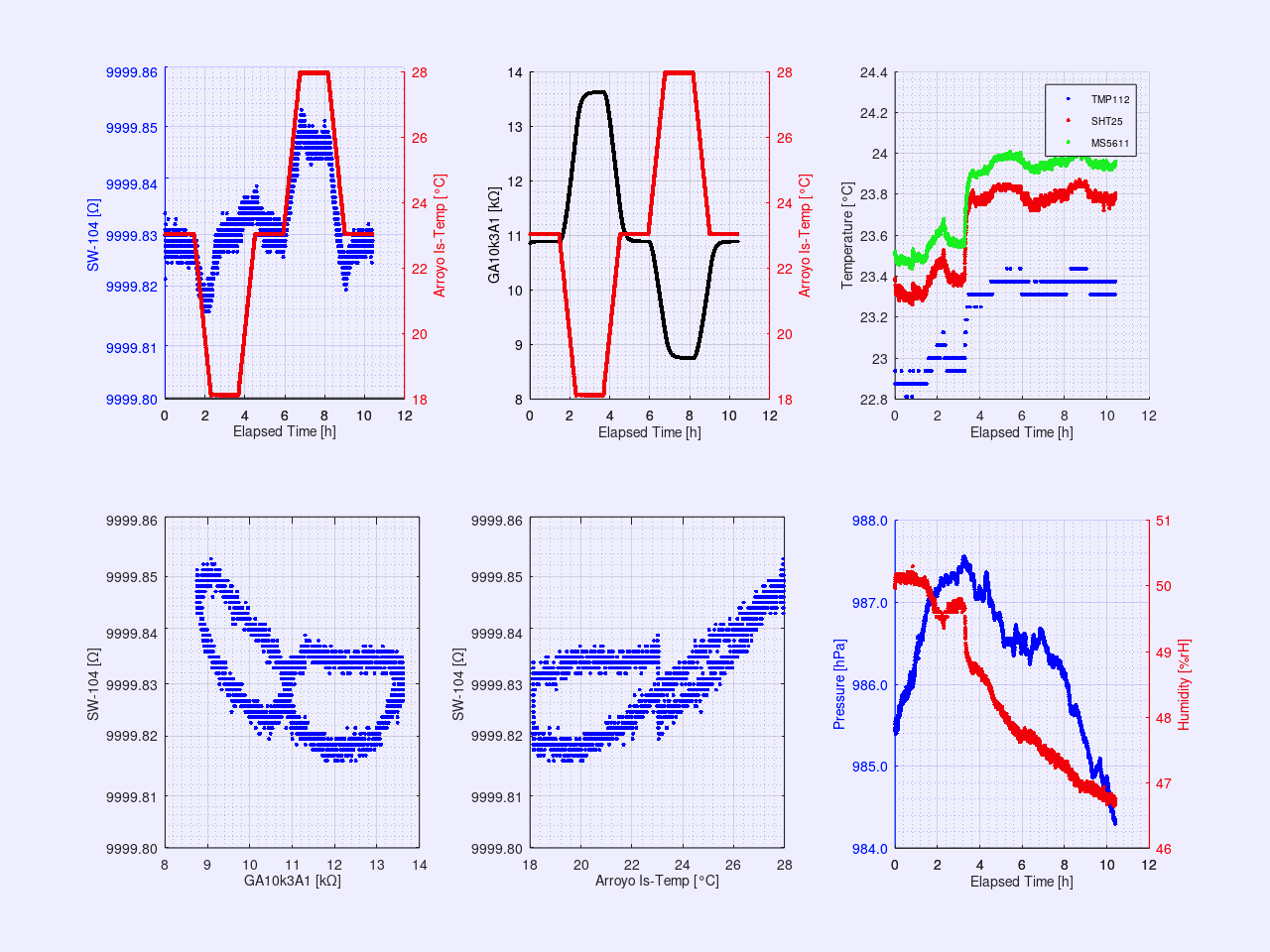 Eventually, another 60 cm of copper wire were removed and the temperature profile repeated. 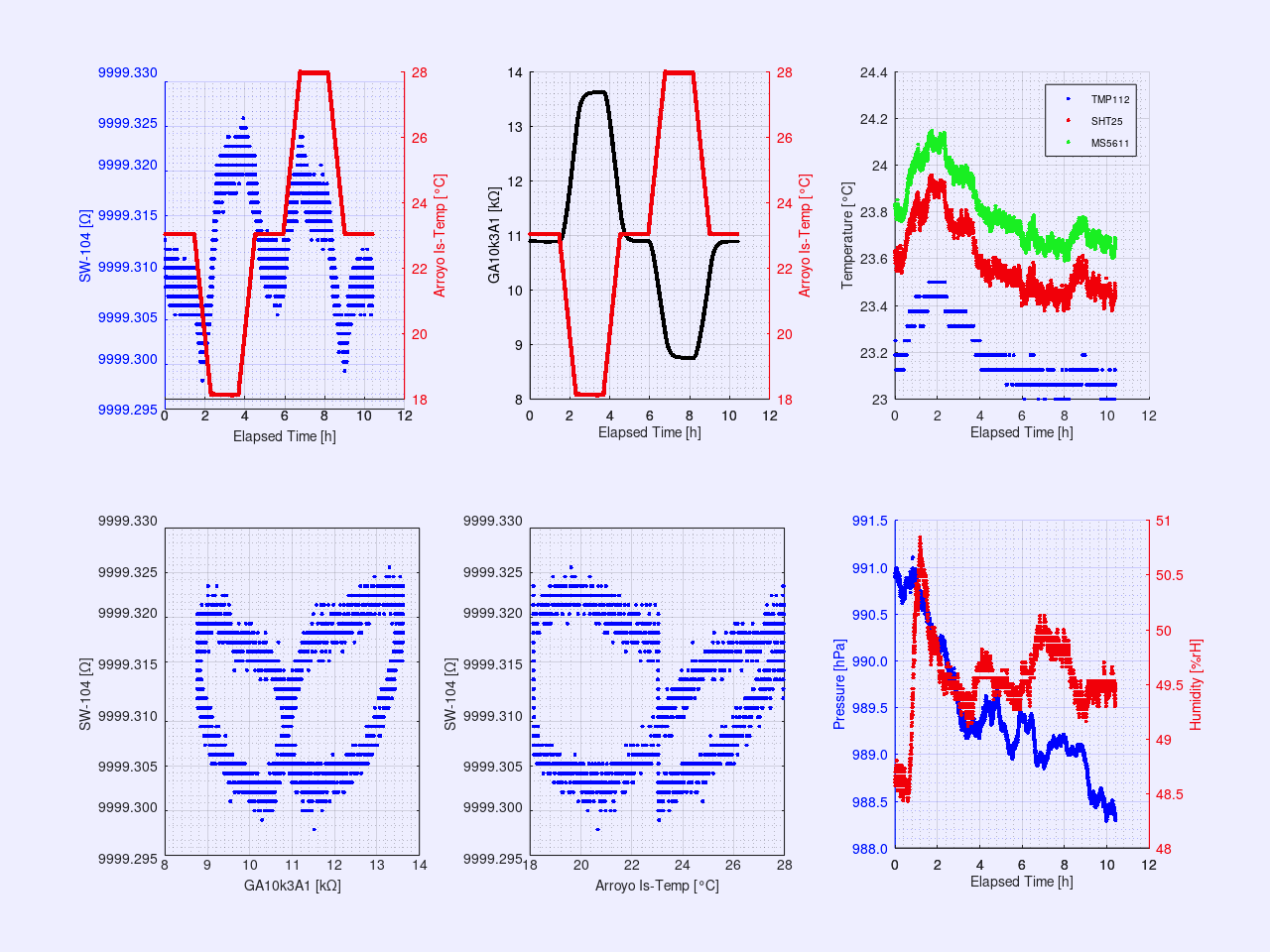 The result shows an almost equally distributed temperature behavior. Finally, Rs was adjusted by replacing the 2 × 2.7 Ω with 3.3 Ω || 5.6 Ω, as shown in the final trimming scheme in Figure 10. 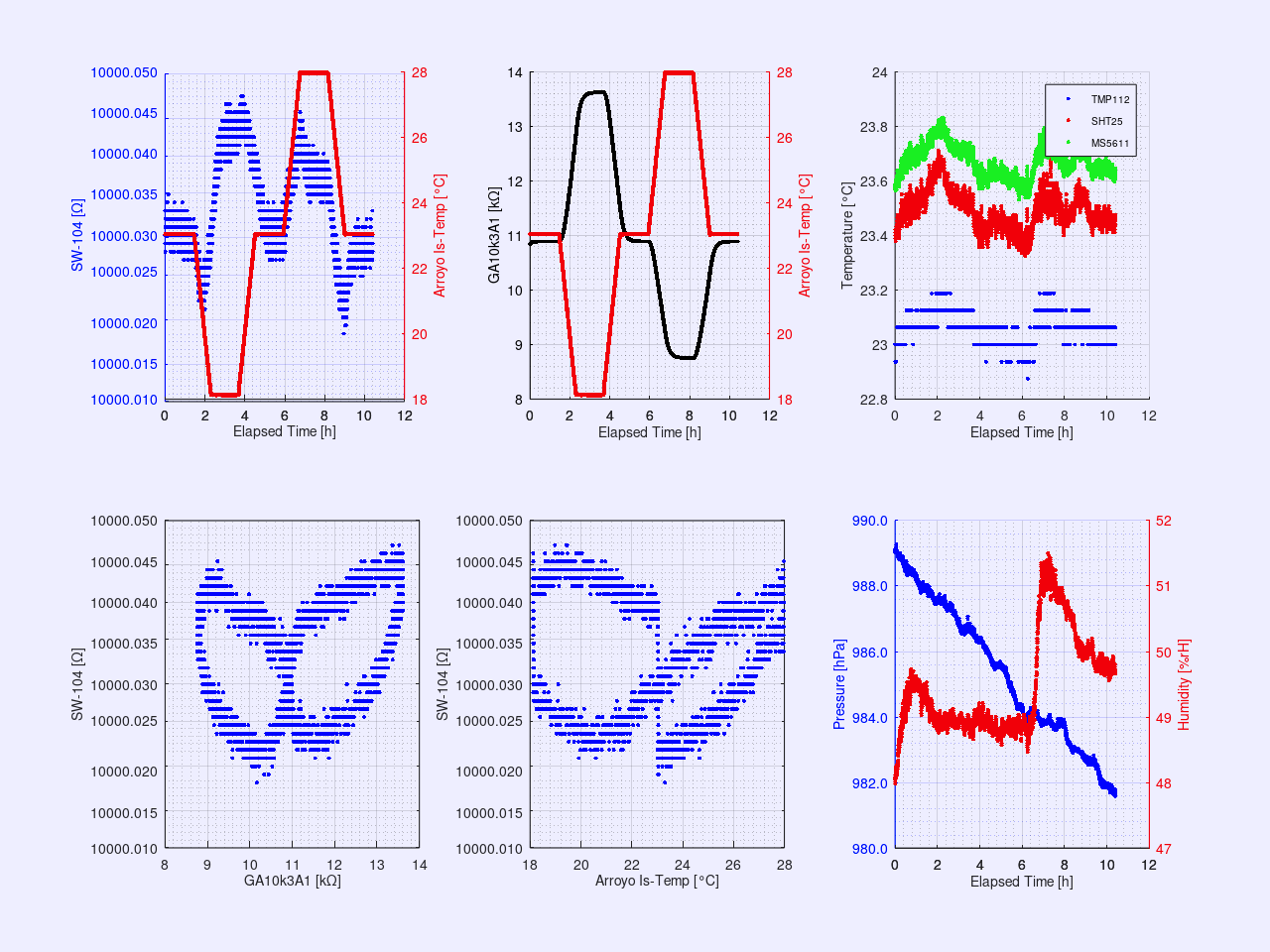 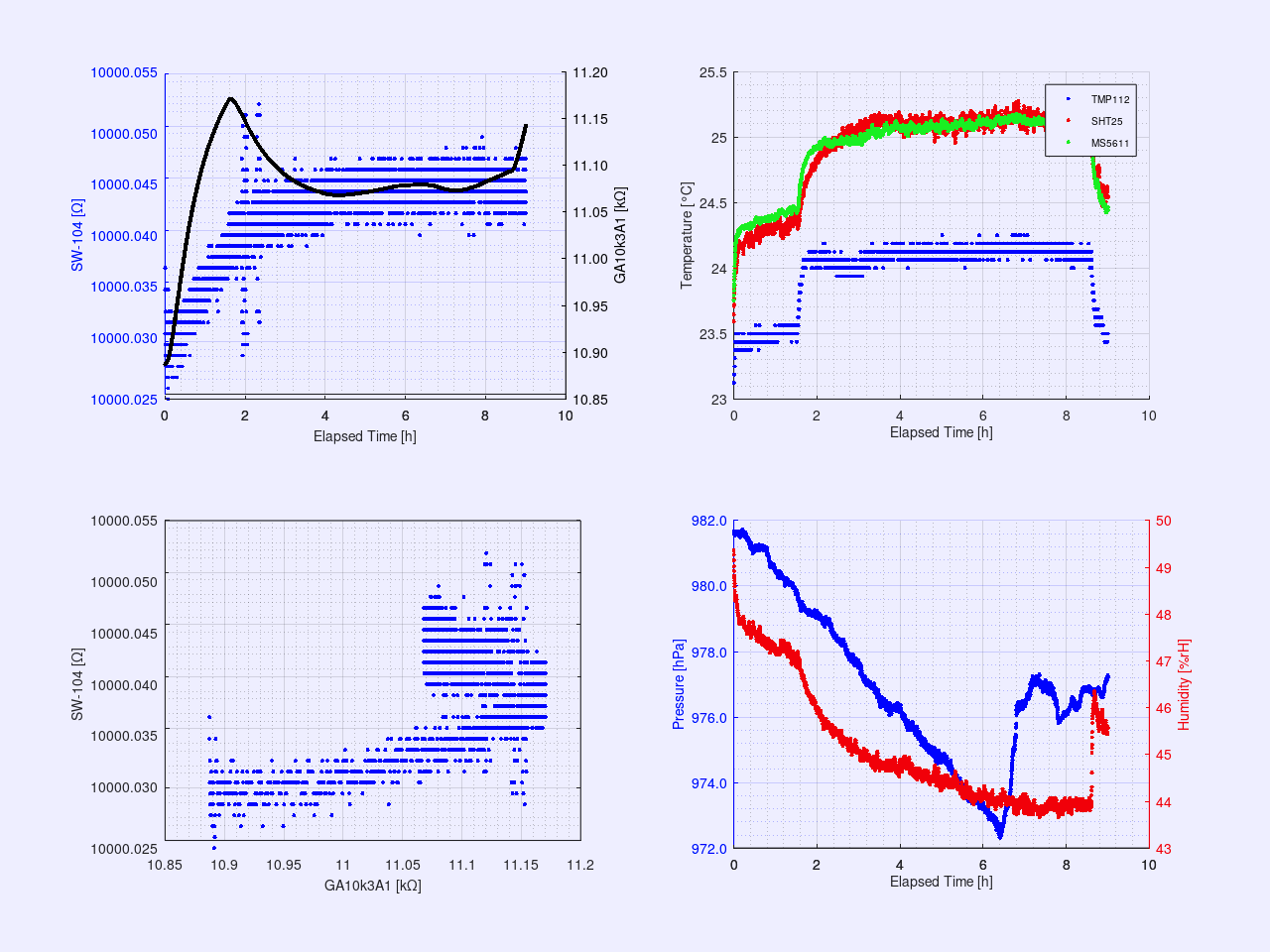 A low TCR resistor reference can be built from readily available components on hobby budget. Although everything can be calculated upfront it still needs a lot of tweaking to get the final result right in a practical build.

There is probably a small time lag between the temperature of the copper wire resistor Rc and the HS520A resistor. Filling the case with some non-conductive ceramic balls or the like might improve the thermal transfer. A transfer fluid such as Galden could help as well, but requires a sealed case and fluid-tight binding posts.

As one might have noticed the temperature slopes of 0.1 °C/min used here were still too high, but the smallest my Arroyo 5305 TEC controller can do on its own. A way to get out of this limitation is to use software-controller such as xDevs.com TECkit which is also freely available on GitHub .

The resistor now needs comparison to other calibrated sources and last but not least its label, “SW-104”. 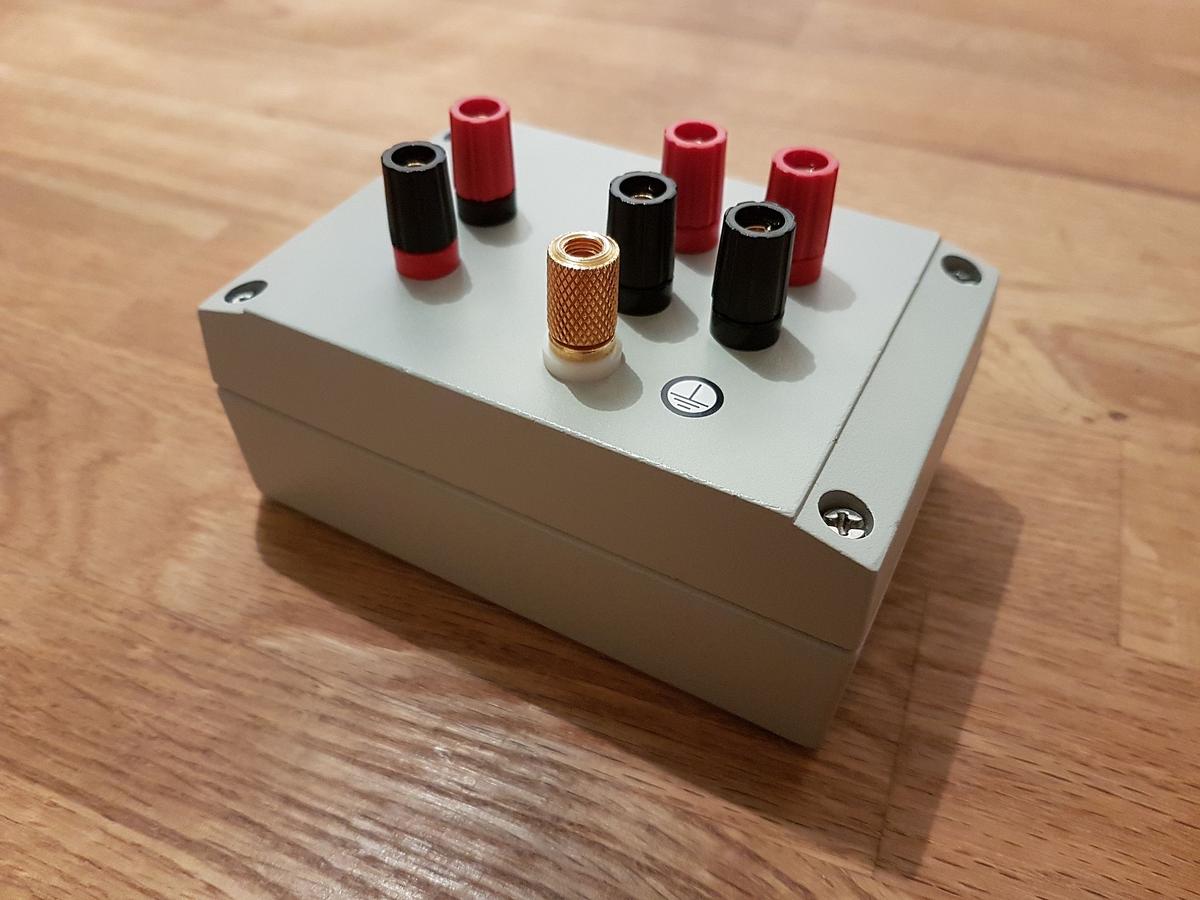 In retrospective I come to the conclusion that the beta is overcompensated, so the series resistor of the NTC needs to be slightly reduced. The heat shrink over these series resistors and the NTC adds an extra time lag that should be avoided. So the heat shrink better has covered the solder joints only, not the complete components.

So if I find the time I will rework the build and hopefully get better results out of it. Just for the fun of it and to see what can be reached at the extremes.