Here at xDevs.com we have a soft spot for ultra-stable DC Voltage references. When I saw some interesting looking module labelled as Semi-finished 34470A Ultra Precision Voltage Reference Board Without LTZ1000ACH. Note that it does not say “Keysight” anywhere except the PCB, and rightfully so. It’s not a Keysight product, but a clone. Perhaps sellers main target audience are hobbyists who interested in upgrading and modifying their 34460A/34461A/34465A 6½-digit DMMs for better temperature stability and lower noise? 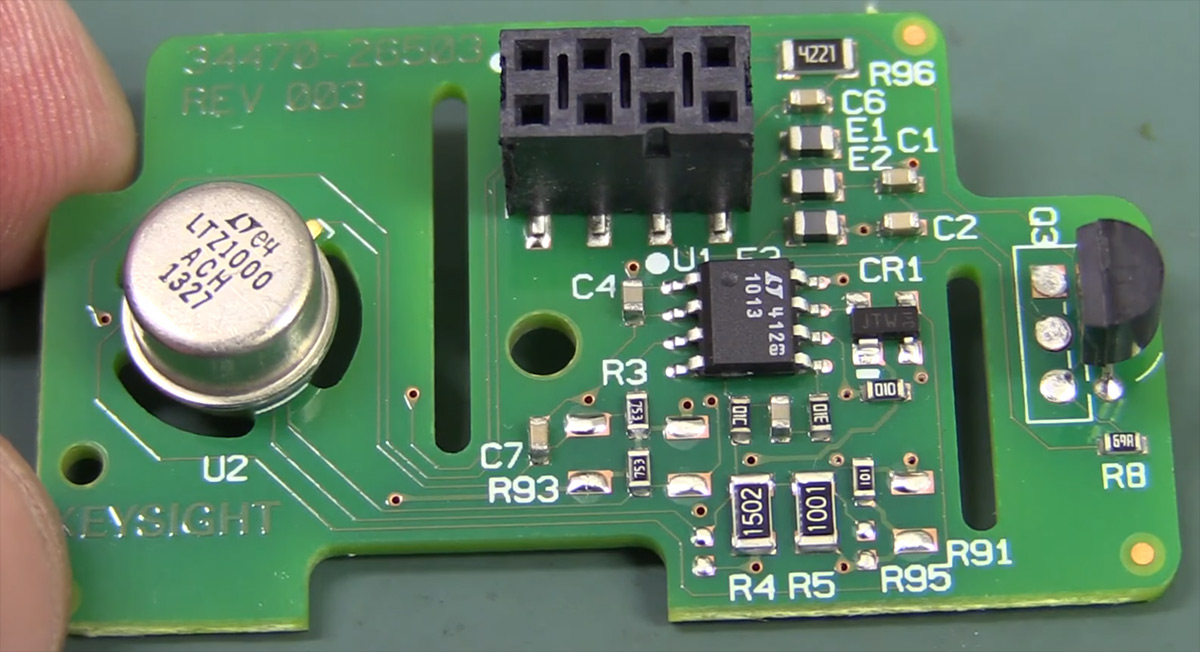 We can see that PCB quality and assembly is impeccable in 34470A with OSP-plated pads and precisely applied solder paste. While reference circuit design is not very good in 34470A (compared to full potential that LTZ1000A chip is capable of in good hands), it is very good reference totally adequate for 7½-digit DMM. It is essentially replicate somewhat flawed reference circuit design from older legendary HP 3458A, repeating same high oven temperature problem that hurts long-term DCV stability of these instruments. This was deliberate decision to meet +50 °C operating temperature requirements.

Now is photo from the eBay listing for “34470A reference”: 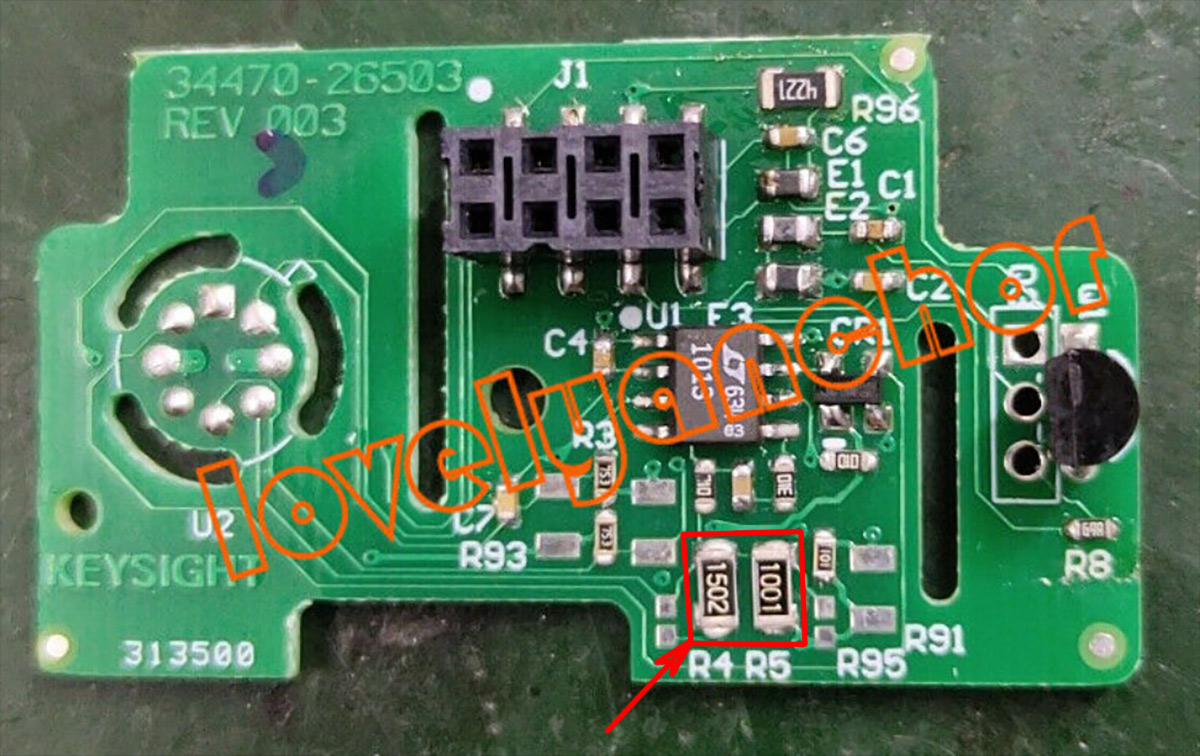 It even looked pretty close with same looking 15kΩ and 1kΩ R4 and R5 resistors used for LTZ1000A super-zener temperature set point (marked with red square and arrow).
Ratio of these two resistors is one of the key performance components that define stability of the LTZ1000A 7V output.

Anyhow, I thought it would be interesting to do some measurements and test these little modules in terms of temperature coefficient stability, noise and long-term drift. Seller accepted $30 USD best offer and two modules were on the way. 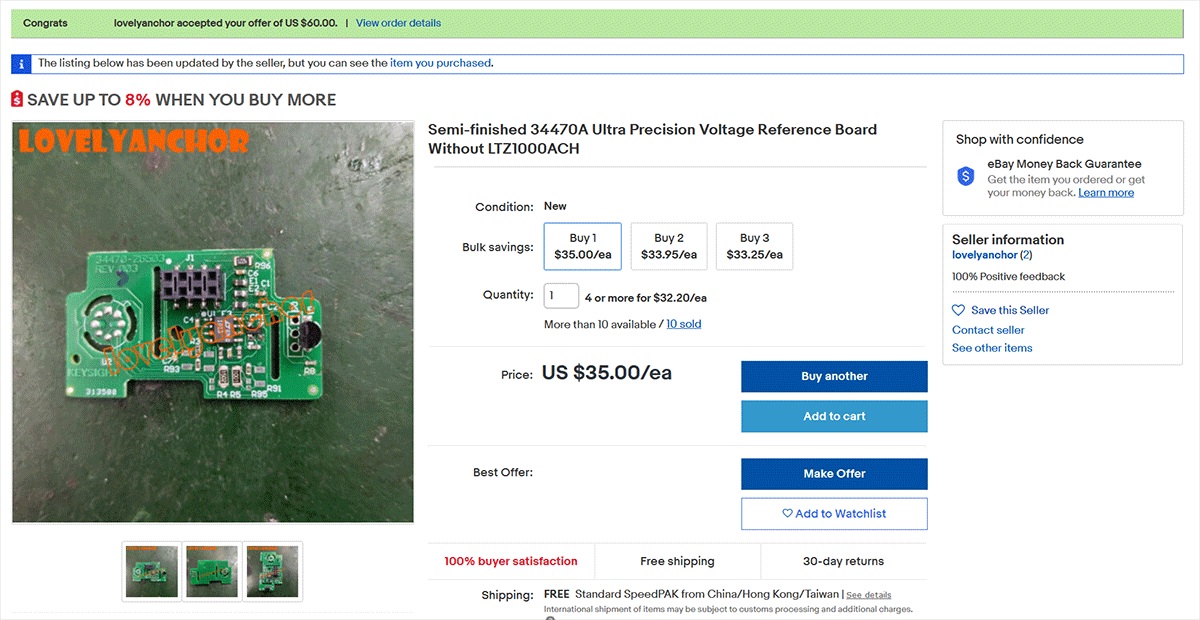 Few weeks later boards arrived, but to my great disappointment PCBs I received are NOT what was shown on the photo in eBay listing 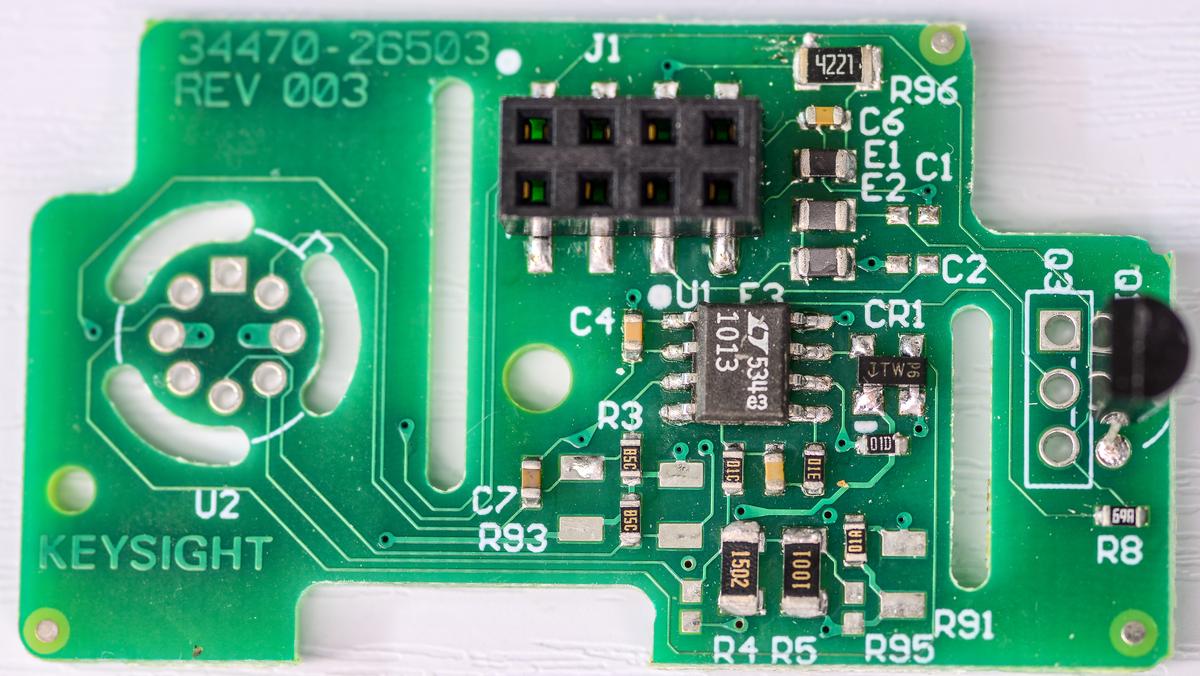 Board assembly quality and overall PCB quality is rather poor, but that does not bother me much. What is a much bigger problem – wrong resistors R4 and R5. Both boards that I received have standard SMD1206 1% resistors and not the special better resistors that are SHOWN ON EBAY listing photo. They may look the same to unexperienced eye, but pay attention on the digits’ font. Only one manufacturer of SMT resistors using special rounded font shown on both EBAY photo from seller listing and also on real genuine Keysight 34470A from EEVBlog’s teardown video.

So this is false advertisement and eBay seller is misleading buyers as he misleads me here. 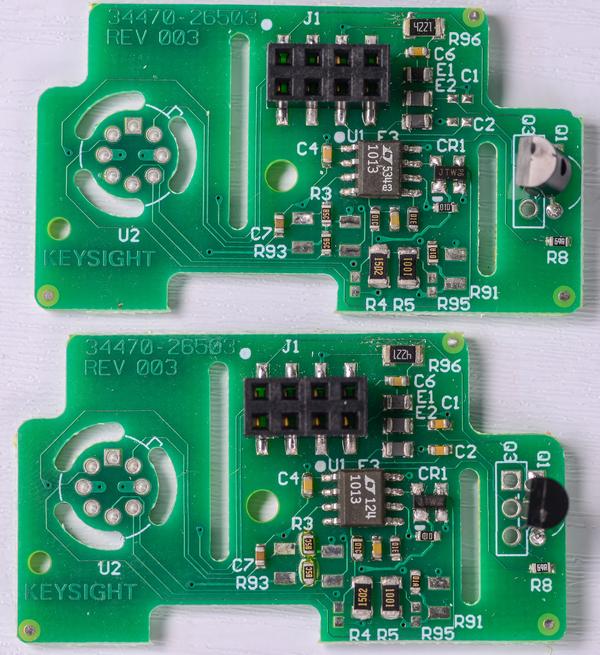 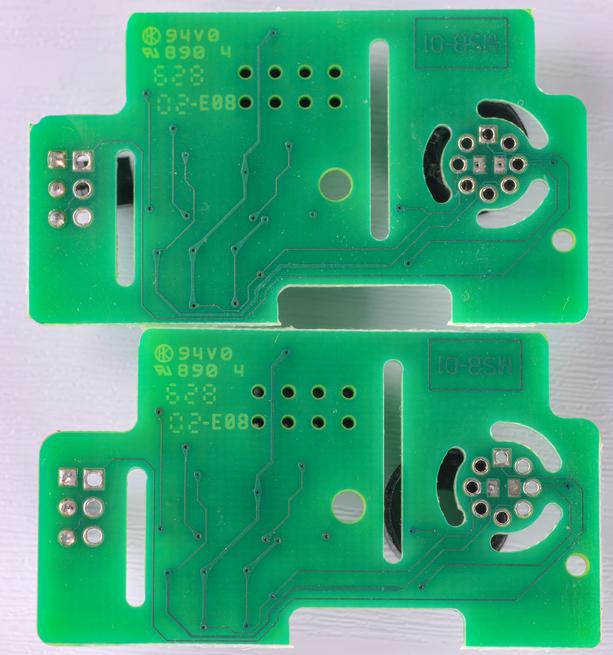 Also second issue – since I bought two modules, they both have these problems with R4 and R5 resistors, but second module also missing capacitors C1 and C2! Why?

I have messaged seller to either modify listing to reflect correct information, or to refund the order. Will see what happens next. 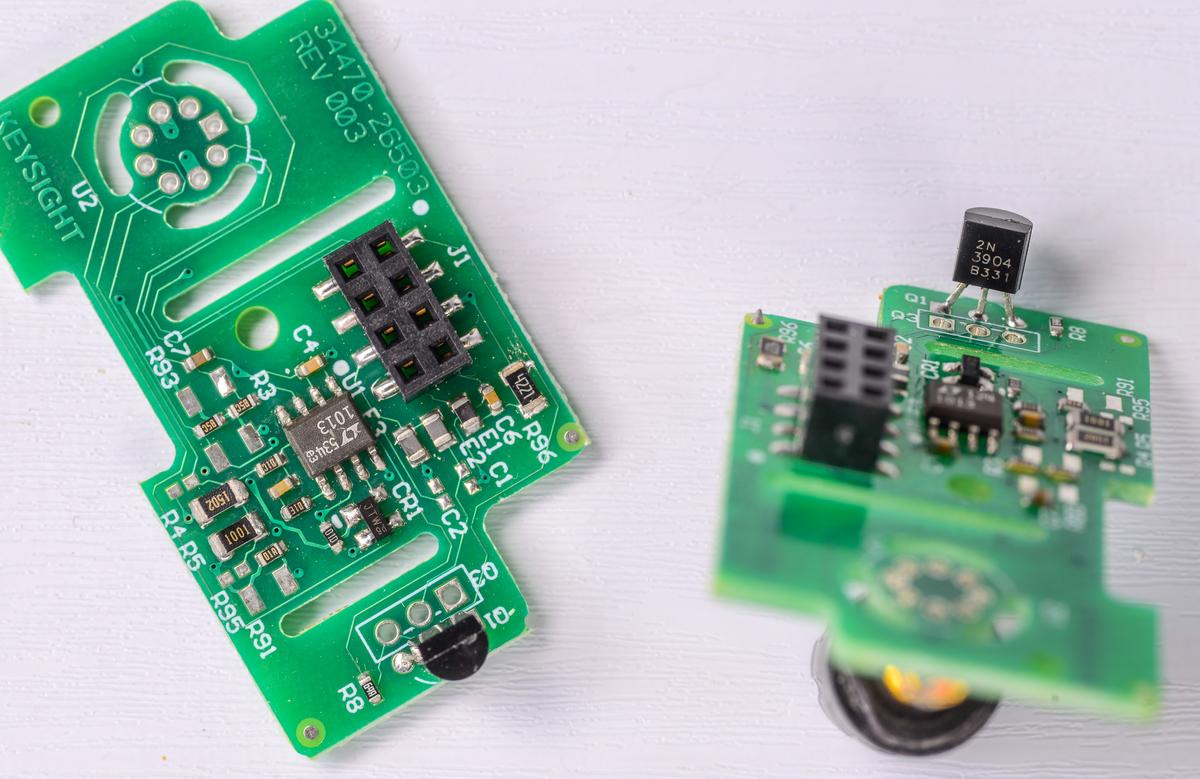 And yes, I know that proper LTZ1000A board components just in resistors would cost 5 times the price of this whole module. Have more than 7 years of experience with various LTZ1000-references and have lot of different designs. It was especially interesting to see how bad is “bad” 34470A reference PCB design is versus expensive typical LTZ1000A with VPG foil resistors and fancy PCBs. 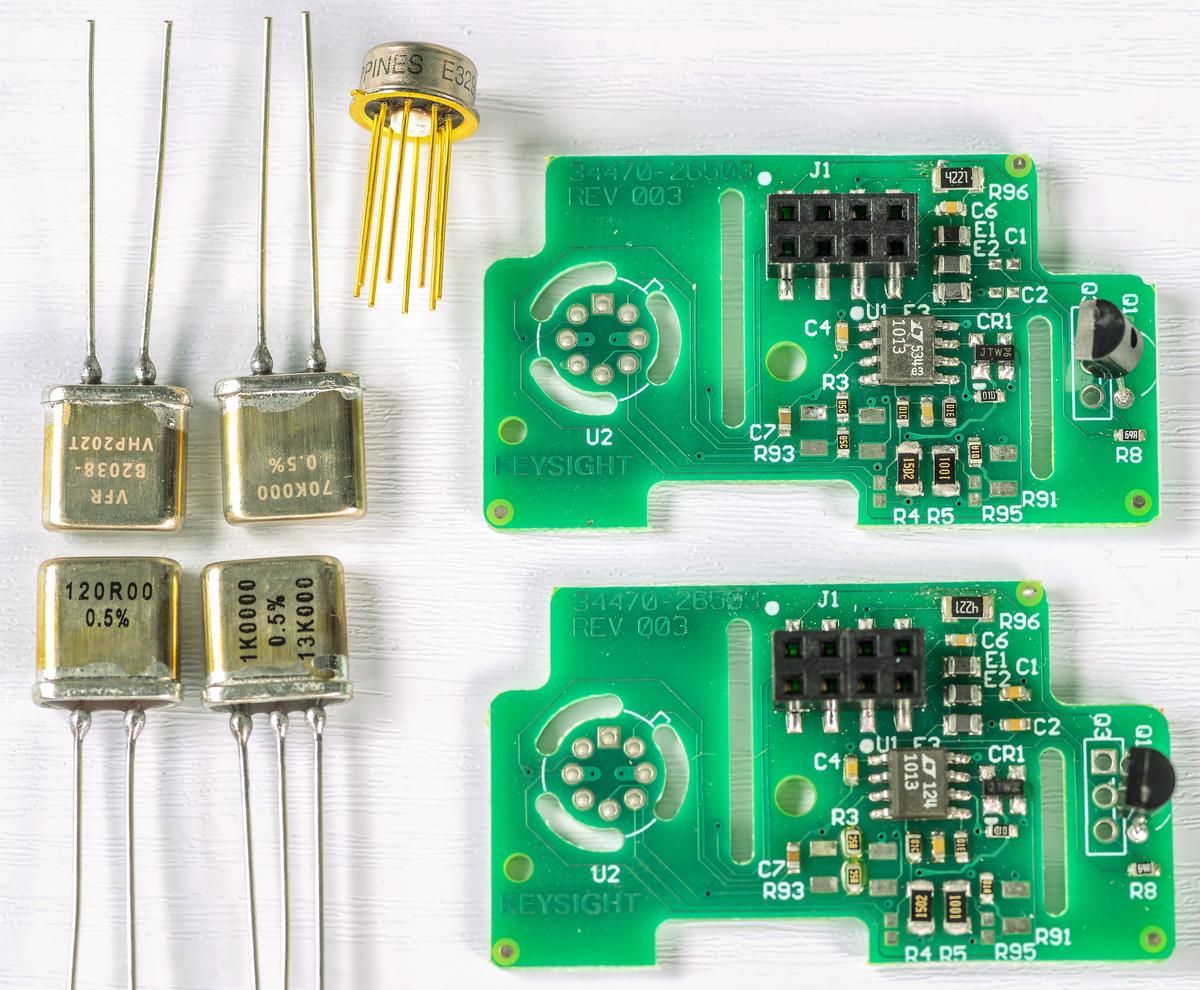 At least 34470A module is smallest there is for production-grade module. It is half the size of old 3458A A9 LTZ1000A module and more than 10 times smaller than my latest quad LTZ1000A ultra-low noise xDevs.com QVR module. 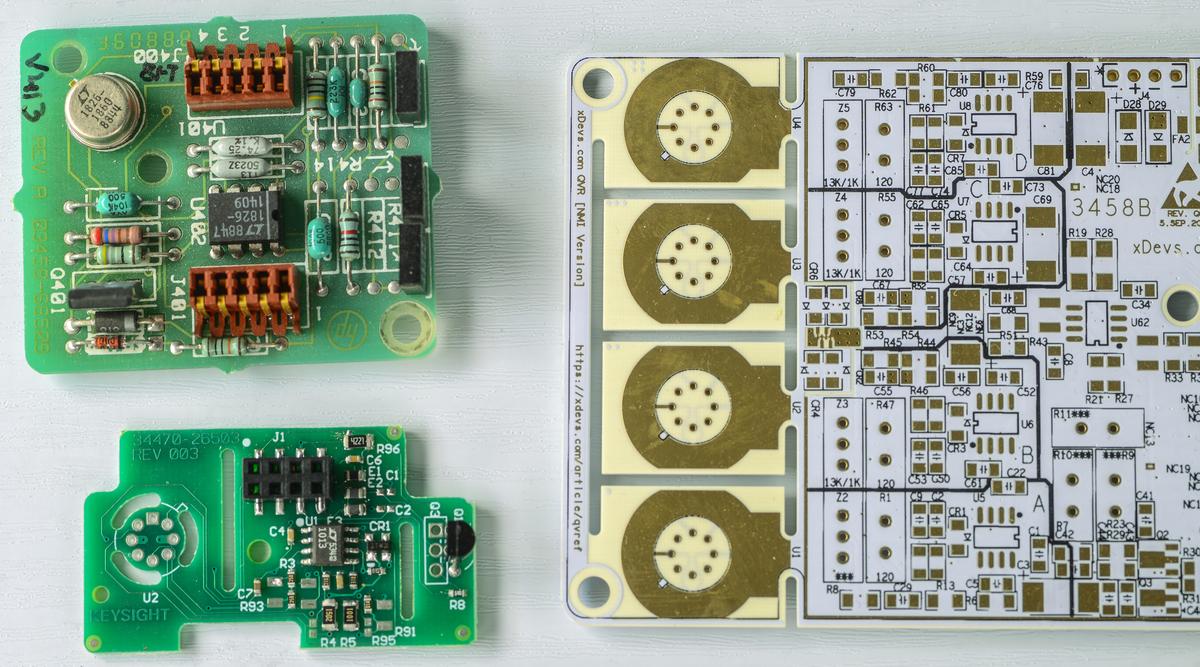 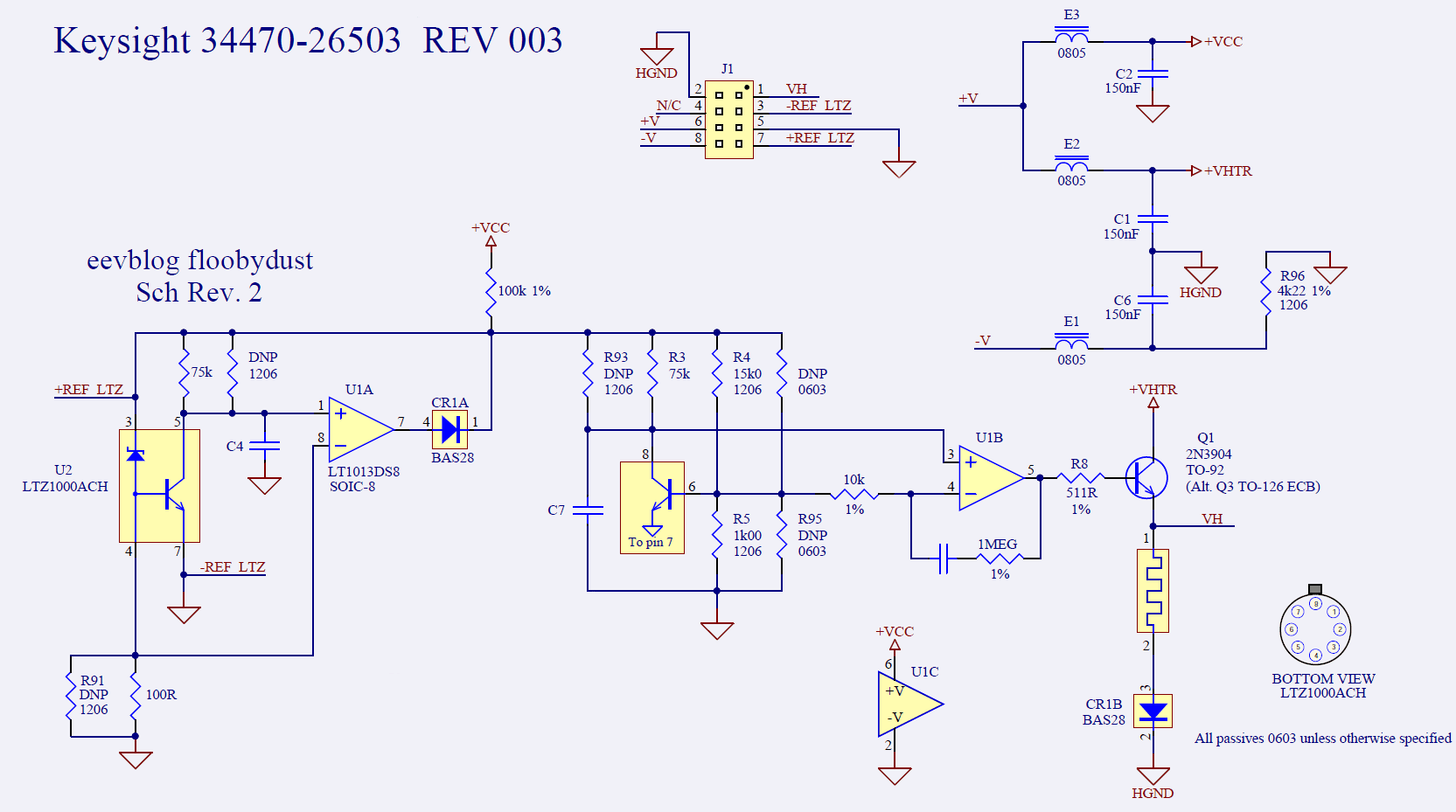 Net name VH on connector’s pin 1 may suggest that it is power rail for heater supply, but it is not. Do not connect any power source to this pin or LTZ1000A can be damaged!

As expected it is nearly identical copy of Keysight 3458A A9 reference module but with much smaller components on compact form-factor. Sadly, also repeats same issue with oven set point configured for ~90 °C. This clone 34470A module also follows real Keysight 34470A design precisely in this regard. 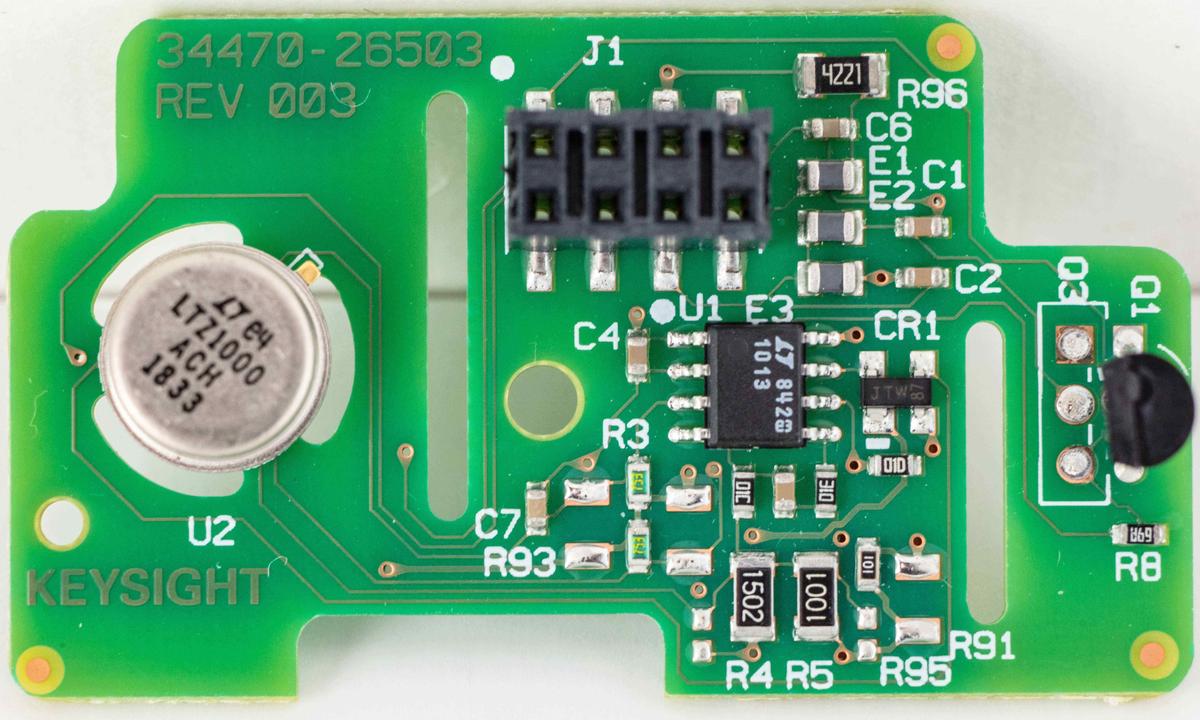 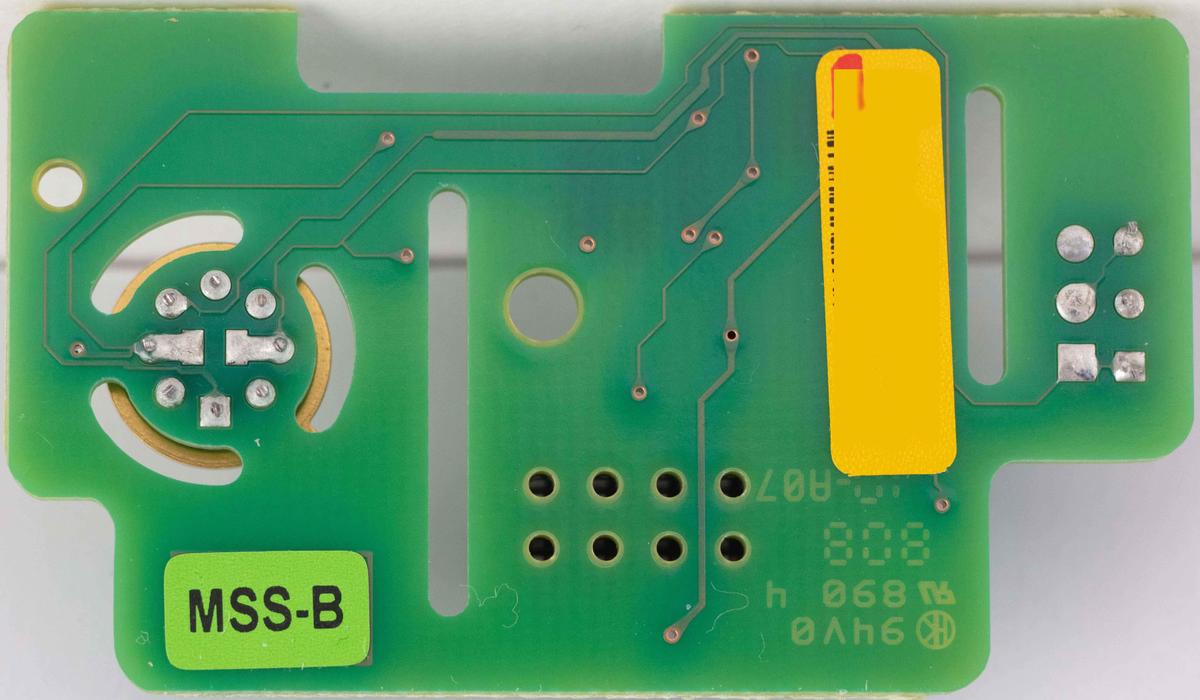 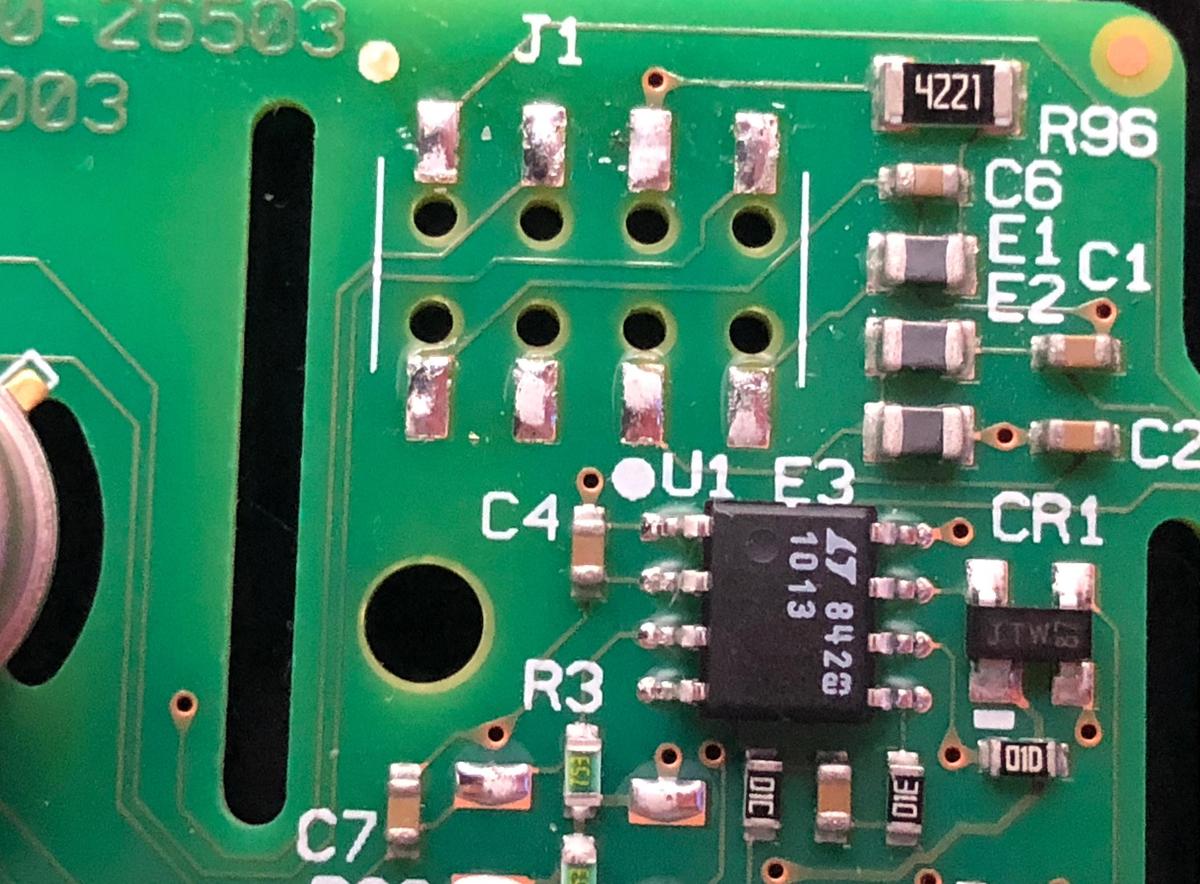 We often hear from gray bearded metrologists and analog designers’ importance of using stable and good components in analog circuits, especially voltage references. Hundreds of hours were spent in debates about voodoo PCB slots, swastika-shaped LTZ fanouts, vacuum-insulated thermal chambers, cadmium-enriched solders and quadruple shielded PTFE wiring. But often such discussions lack of any quantitative performance data to actually show benefits of all that effort. Here we address this important issue in terms of thermal stability measurements of voltage reference module shown above.

Keep in mind, reference module tested here is NOT manufactured by Keysight Technologies. This is aftermarket clone copy of original design, with subpar assembly quality and unknown source of the parts. Keysight does perform additional tests and quality control work to ensure their modules meet the required specifications, which is rarely a case with aftermarket parts. I do not have 34470A original module to compare 1:1, but do expect similar results.

Reference was powered with Keithley 2230-30-1 linear power supply with supply voltages +12 and -12 VDC. Current consumption from module was ~26-29 mA on positive rail and about 3mA on negative rail, which is typical and expected for LTZ1000A datasheet circuit. Module was assembled with LTZ1000A chip manufactured in 2018 week 38 with legs cut flush to the PCB surface. None of this voodoo LTZ standing on long kovar legs rubbish

Good LTZ1000A design capable to provide thermal stability better than 0.05 ppm/°C and this is what I have used as a target during testing and tweaking of all my xDevs.com KX, xDevs.com FX 10V and xDevs.com QVR low-noise DC Voltage references. With some effort stability better than 0.03 ppm/°C can be achieved from typical datasheet circuit, without slots, cadmium solder or trimming LTZ1000A kovar legs trimming to micrometer precision. After all, LTZ1000A is power in/power out device and require just careful system design.

Typical 1% SMT chip resistors as used by seller have temperature coefficient from 100 to 250 ppm/°C, not the 2-5 ppm/°C expected by LTZ1000A reference. Now idea is to replace cheap resistors with something much better and repeat same temperature stability test to narrow down if the excessive tempco caused by resistors or something else like poor PCB component placement, SMT-type LT1013 or routing of the copper traces around.

I bought some reasonably-priced Susumu SMT RG and URG series resistors in 1206 size, specified to have tempco better than 2 ppm/°C. 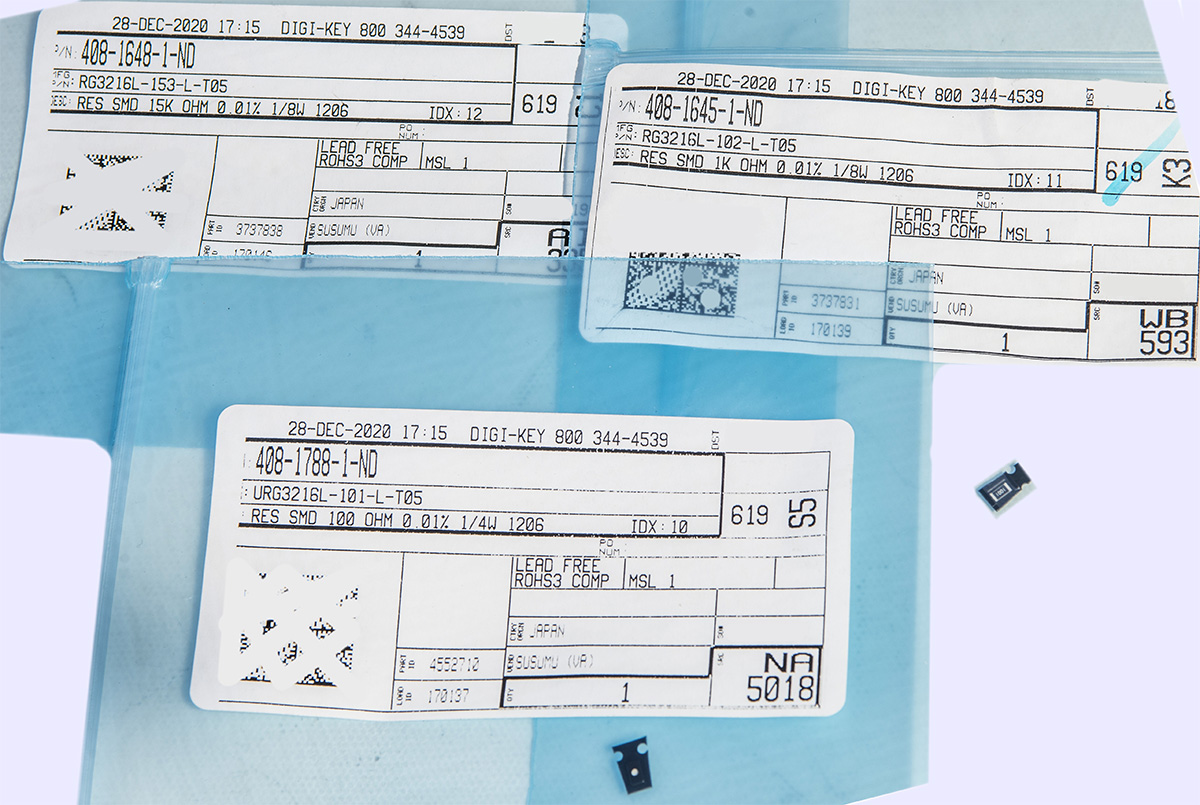 Of course, there are even fancier metal foil VPG resistors such as VFCP Y1630 (over $11 USD/pcs) or FRSM Y4023 (over $18 USD/pcs) but in standard LTZ1000A circuit I doubt we will see much difference in DC Voltage output temperature stability compared to more affordable Susumu 2ppm/°C parts. Long-term stability is another aspect, but its completely out of scope of this article. In the end of the day Keysight 34470A is a benchtop general-purpose DMM and it is not suitable or supposed to act as a laboratory DC Voltage reference equipment. 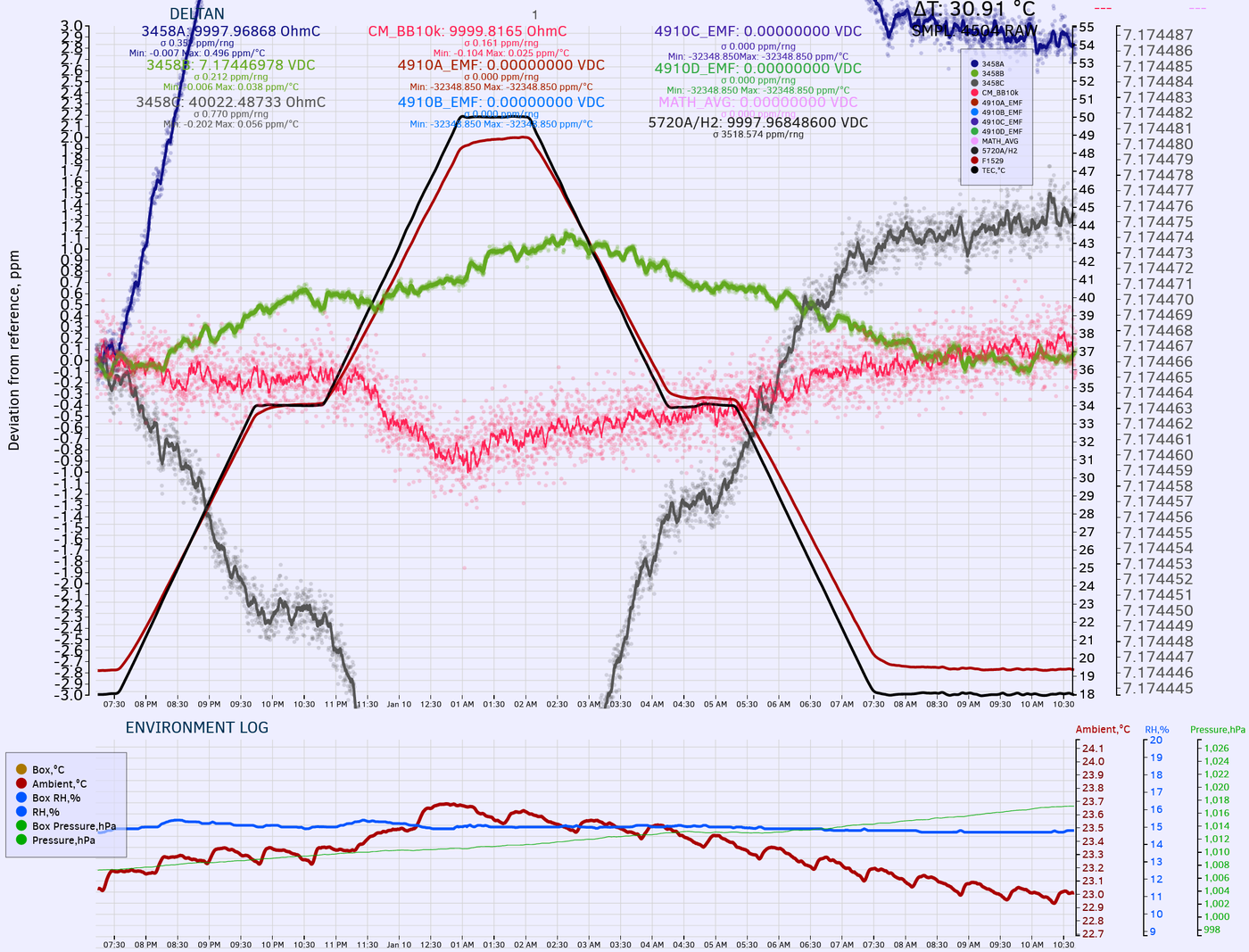 I also did additional test with supply voltages to reference module raised from +12 and -12 VDC to +15 and -15 VDC. Difference between tempco measurements was less than 1 standard deviation and considered negligible in the final results.

P.S. To provide justice for seller, I have contacted seller about misleading resistors discrepancy and after discussing performance drawbacks of the unit’s resistors as in eBay listing (with photos at time of purchase, seller replaced photos with cheap resistors already) seller issued full refund on my two modules. Buyers beware, as with everything that comes from secondary market!

Discussion is very welcome thru comment section or at our own IRC chat server: irc.xdevs.com (standard port 6667, channel: #xDevs.com). Web-interface for access mirrored on this page. There is also nice discussion from Keysight 34465A and 34470A owners about practical DIY upgrades with these LTZ references in their instruments here on EEVBlog metrology forum thread.