Integral nonlinearity (acronym INL) is a commonly industry-used measure of the performance in DAC and ADC systems. In DACs sources, it is a measure of the deviation between the ideal output value and the actual measured output value for a certain input digital code. In ADCs, it is the deviation between the ideal input threshold value and the measured threshold level of a certain output digital code. This measurement is performed after other major errors, like offset and gain have been compensated.

Nonlinearity is often the most important metric of ADC/DAC system or measurement device. Integral non-linearity is key factor that determine accuracy of the unknown signal measurement, after all other errors are accounted and corrected for. Quality measurement devices specify linearity for each function range, or overall linearity of the ADC subsystem. However impact of different parameters and measurement device settings to the INL performance is often ommited, leaving it to the user to evaluate and characterize.

Readings from the ADC often have many other error sources as well, such as noise, offset and gain errors and temperature dependency. However INL is often the most challenging parameter to improve, especially at high-end of the voltmeter spectrum. As an example for DC Voltage meter, it is relatively easy to make 7½-digit resolution or even 9½-digit ADC, but it’s extremely expensive to make ADC that is linear to ±0.1 or better for any unknown signal applied to the ADC input. Best commercial “DAC” in the world, Fluke 720A Kelvin-Varley Divider provide linearity to ±0.1 ppm only for short-term after tedious and time-consuming calibration. Industry-standard in DC Voltage metrology – Keysight 3458A have ADC designed with INL better than ±0.1 ppm, with good units tested typical ± 0.05 ppm against primary quantum standard during ADC design evaluation in 1989.

This project goal is to reveal actual INL measurements of different commercial devices, and evaluate methods of accurate INL measurement setup. This is open work, without timeframe limits and new data will be added, considering target goals and uniform measurement methodology.

Redistribution and use of this article, any parts of it or any images or files referenced in it, in source and binary forms, with or without modification, are permitted provided that the following conditions are met:

If you willing to contribute or add your experience regarding testing performance of various instruments or provide extra information, you can do so following these simple instructions

String of equal high-stability resistors with known value can be used to generate known voltage steps. This method can provide best results, if resistors used in the array have negligible temperature and power dependency, used input voltage is stable over time and environment variations. But it also require lot of manual work and prone to human errors and affected by thermal gradients, contacts quality. Errors can minimized by using special low-thermal switching equipment, but that type of gear is also rare and expensive on it’s own.

Useful tool for this purpose is resistance transfer decade ESI SR1010/1030/1050 series. Once it have each element calibrated, it can also offer good linearity in stable environment conditions.

This is easiest method to perform, but require expensive and characterized precision source, such as high-performance calibrator or programmable standard. Best calibrators such as Fluke 5440A/5700A/5720A or latest 5730A can be used to measure linearity to about ±1 ppm for main DC Voltage ranges (11V / 22V) or bit worse for other ranges.

Less expensive and less linearity source also can be used, if it is adjusted and guarded by more linear measurement device. Practical example of this setup for DC voltage would be using precision source, such as HP 3245A or Time Electronics 9823 calibrator, measured and corrected by much more linear Keysight 3458A. So essentially source is just act as signal generator, but actual measurement is performed versus 3458A DMM. Drawback of this method lies in assumption that used DMM is indeed linear to specification (±0.1 ppm). 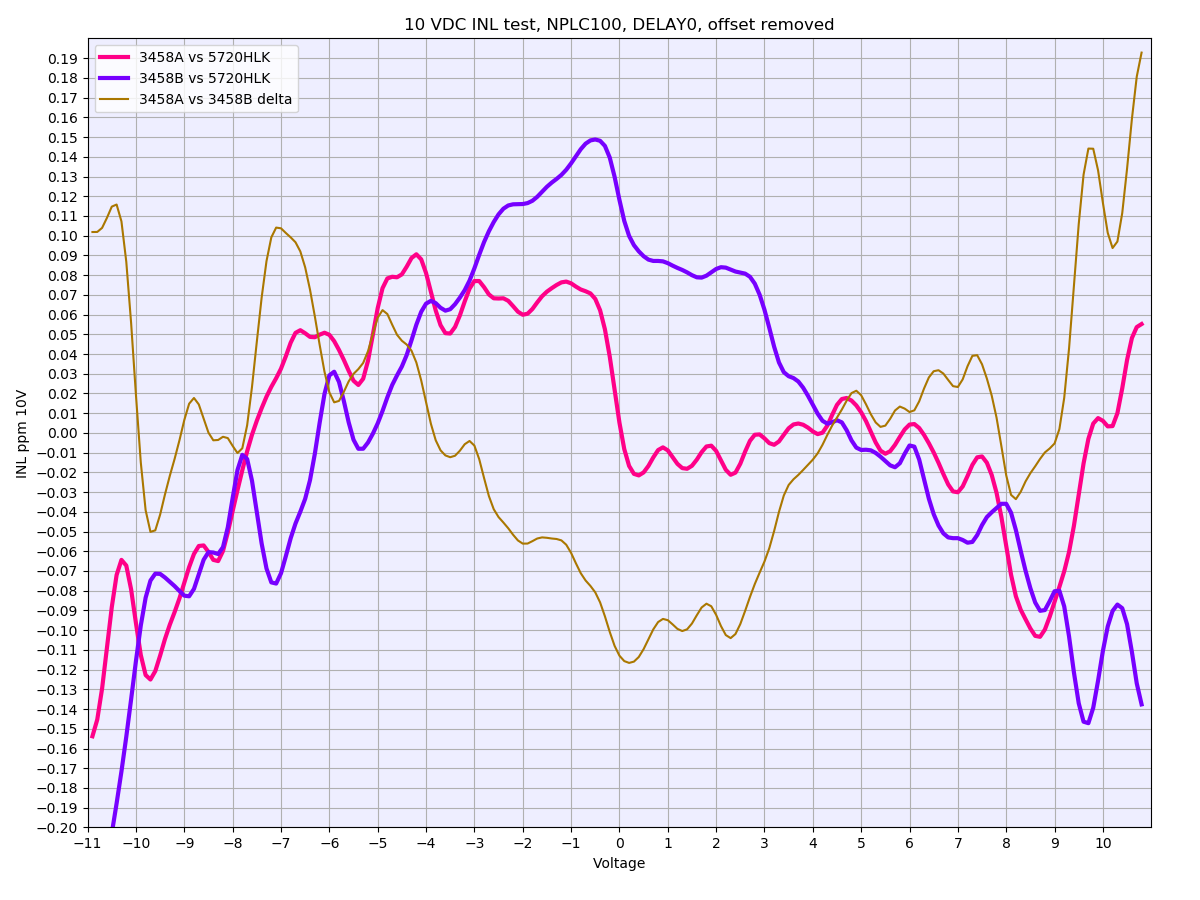 One has to be careful when comparing performance specifications and read all 5pt font notes. Obviously manufacturer often may want to show “best case” result or “typical” data, leaving up to application engineer to figure out his use conditions/specifications to apply. But 3458A documentation does mention INL 0.1ppm, while Fluke let you guess from transfer specs. In my calibration verification procedures, I follow HP’s way and test against these strict levels for FAIL/PASS. I have seen that good working 3458A in shape able to deliver better than 24hour specs across whole DCV function using this worse case scenario, so for our own testing there is no benefit going the typical(?) metrology squared root uncertainty calculation. 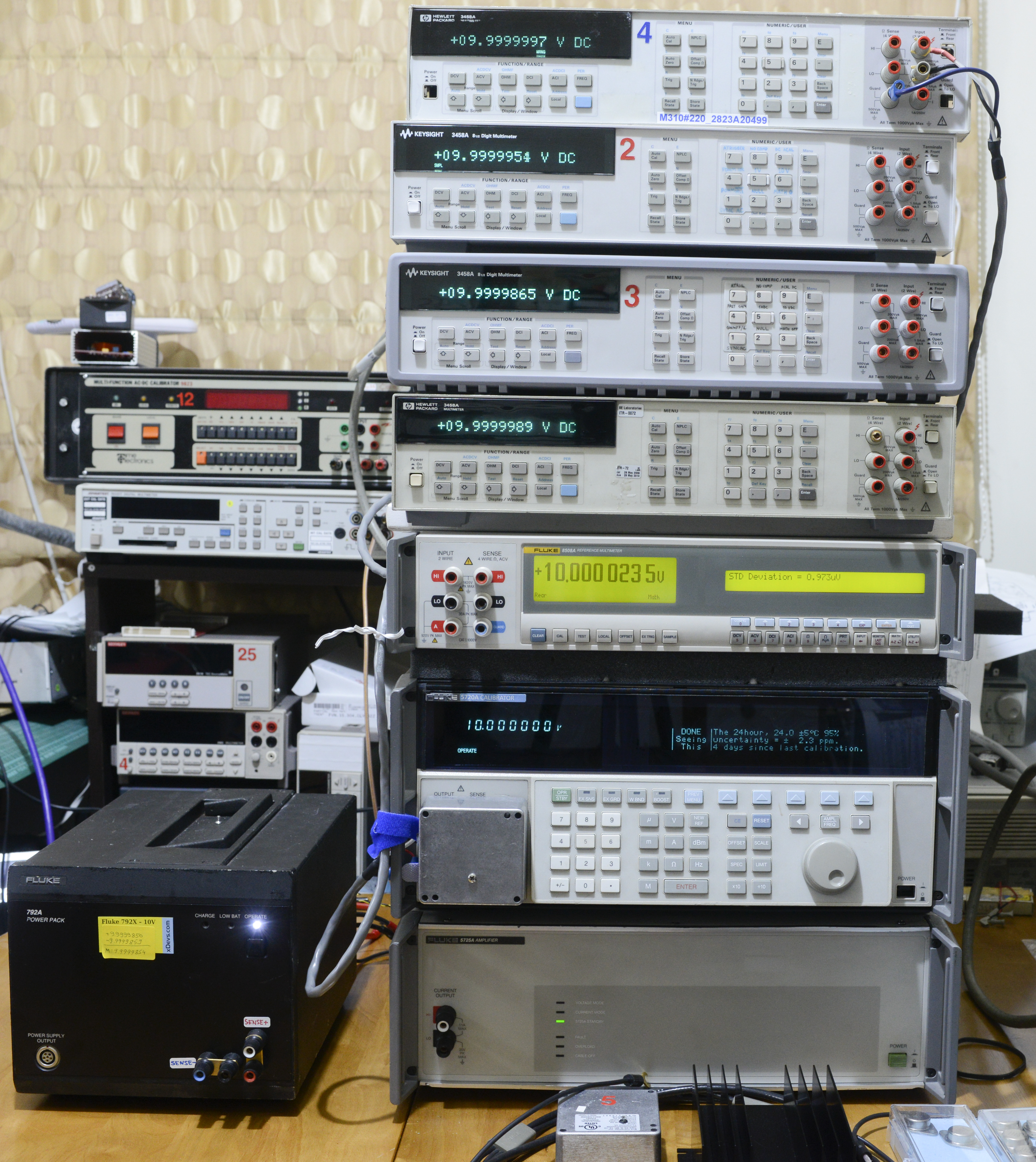 Another thing about the above mentioned 1kV transfers. Heating/divider PCR error IS included in 3458A specification already. If you want best accuracy, you can indeed wait till readings settle out and then get better result for this range. Film Vishay resistor network for this is not too fancy, so obviously there was no goal for best performance in this range by design. From my brief testing, it takes about 15-20 minutes till 1kVDC signal settles to flat samples with sdev around 1ppm or better. And since 1kV range ACALed with 10V only, you don’t have this parasitic effect during the transfer.

Graph with direct poly fit INL versus the source (Fluke 5720A “Hulk”, calibrated 2 days ago). Source considered as ideal here.

Meters A,B,C agree to each other. Can we say with good confidence that this curve dominated by calibrator’s own INL here? Questions, questions. Now question about 3458 meter D. It’s INL data is horrible, aye? Well, here the confirmation of the theory – that bad drifty A3 also gives not only drift (2ppm/day in this case) but also bad INL performance. This would be naturally expected as reference voltages are drifting wrong ways and total ratios for charge in ADC slopes would be not so good either?

I’m interested to know, as INL sweep can be faster to do then waiting for a week logging proven stable reference to find out dodgy A3 board in meter.. Fluke shows somewhat wierd data, with very good INL on positive polarity, but somewhat ugly on negative?

Here meter “A” used as the reference, assuming it’s INL is magical 0.00 ppm. So we trade 5720A’s INL error to 3458A INL error, and can see direct difference between meter “A” and rest of the pack. Please note different vertical scale compared to previous graph, +/-0.2ppm now (previous was +/-0.35ppm).

Because three good 3458 meters agree on INL points very closely, what if we do next math acrobatics:

Now this “reference across the hospital” used as zero and each meter compared to it, showing deviation from the averaged “corrected out” 5720 INL. This idea implemented on next graph:

This data finally delivers long desired “typical” +0.05/-0.05 ppm across the whole sweep. If this is real or not, we will find out only next year, when my experiment extend to the next level. :-X

Perhaps same conclusion done by Jim Williams during his design for AN86 20-bit DAC, as we also see three 3458A’s on the bench. It should be clear why need to use minimum three meters, better more to better remove errors of the source itself. Please note different vertical scale compared to previous graph, +/-0.3ppm, increased to fit Fluke 8508 INL.

Also while at it, I was thinking how we can show “noise” or variance of the INL points? Previous graphs show nice and baby smooth curves, but they are not precisely true. Those datasets also hide some information from you , as each 0.1V step is actual median from 3-10 samples (depends on sweep config) so it’s not a single reading from meter. Idea was to reduce short-term noise from the meter’s ADC/REF, etc. But what if I want more real-life data, I cannot remove the inherent noise.

So instead of doing medians on step samples, I’ve ran sweep and stored every single sample into DSV file. Then same math plotting was applied with poly fit, but now twice. One is filtered out gaussian value of the step, show on graph with bright line. And peak-peak each sample data is now also plotted in opaque thick line. This gives some represenation of “peak-peak” window on each step point.

Current example, taken by another 5720A and two old 3458A’s in far far away country over remote Raspberry Pi log:

Red is differential INL between meters. And don’t ask me what happen with meter “B” after +10V…

What really amazes me – that we can even distinguish this kind of numbers at fractions of 0.1 ppm, in our crude homelab setups (even with more reasonable 5440B/4808 calibrators, no need 5720’s for this data testing). Just to think about it, own LTZ1000A reference noise that is installed in the meter produce noise around 0.2ppm all by itself, but here we looking at tiny signal deviations 5 times less than this noise! I did not really expect it.

Keithley 2182 even with direct connection to MFC managed to demonstrate system INL less than ±3ppm. Keysight 3458A is at least order of magnitude worse for such low-level signal measurement.

Data sampled every 1% step from -110 to 110% of the scale. Both meters configured NPLC100, DELAY0, AZERO ON and ran DCV ACAL before test start. Data might be still compromised by aircon, as it’s kinda wobbly during the sweep. Purple and green charts are direct INL of the meter vs calibrator’s programmed value. Orange line is difference between two 3458A’s used in the test. Each step have soak time 20 second after programming calibrator output to allow settling. Configuration for calibrator : S0R6F0O1=.

10V sweep. About ±0.2 ppm INL over the span. Delta INL between meters <±0.12ppm (should be at least twice better, so perhaps more tuning for settings can be done). Could be also cabling issue or thermal EMF offset, to cause the zero crossing jump. I’m not very familiar with 4808 INL performance to judge now.

1V sweep is more interesting, in respect of delta INL between meters :)

Negative polarity is somewhat strange. There is ~40 second delay on each 1V step, so it’s hard to tie that just on self-heating errors of the HV divider.

Few more sweeps with NPLC20 and NPLC20 with short delay (2s instead of 20sec):

Perhaps it’s safe to assume that long NPLC100 not required to do INL test with <0.1ppm data between 3458A’s.

Discussion about this article and related stuff is welcome in comment section or at our own IRC chat server: irc.xdevs.com (standard port 6667, channel: #xDevs.com). Web-interface for access mirrored on this page.