All plastic exterior parts except front panel were missing. Outside aluminum shielding/case covers were bent on corners, looked that scope was dropped on angle. Despite of damages and poor look – it still was able to power on and booting Windows 98 OS. Hard drive had bad SMART status and was making clicking noise, so obviously it’s going to be replaced with new HDD as one of first steps of scope restoration. While machine was able to boot OS without problems, main scope application, TekScope was unable to start. It was just showing welcome splash screen and hanging there. Downloading fresh copy of TekScope 2.5.3 Firmware for CSA7000/TDS7000 from Tektronix site and reinstalling application did not help either.

Before we dig in, let’s take a look on high-level block diagram of Tektronix CSA7404 from service manual : There are four main modules/boards in scope.

We had access to working Tektronix TDS7704B, which come handy to check some parts and do board-level testing. Obviously both these scopes use common architecture, and share same power supply board and similar (but not interchangeable) PowerPC/x86 combo.

As first measure of any electronic device troubleshooting – check power. Swap whole power supply module from TDS7704B to CSA7404 showed no functional issues or differences, which pretty safely can show that power supply delivery to other boards from mains PSU is OK.

First step will be visual inspection of all internals of scope to see, if any components or boards are physically damaged or missing. On acquisition board there was missing heatsink on one of big National Semi custom ASICs for channel 3. New heatsink was bought are placed on chip, hoping that it’s BGA connection to board is intact.

On x86 board there was leaky output electrolytic capacitor in CPU DC-DC convertor. It was replaced to new one, which is common operation for servicing old computer motherboards already for a while. As a side note, considering cost of such scopes even today it’s quite unpleasant to see low-end CapXon capacitors being used.

As was already stated earlier – there were no power supply board problems, as all voltages were present, and no visual damages were observed either. Swapping PSU from another scope did not make scope progress on loading app any further.

Interconnect boards (P200 between PPC board and ACQ, power delivery interconnect boards) were fine too, replacing them to same from TDS7704B did not change anything. So problem lied either in acquisition board, or PowerPC board or interfacing between NLX and PPC boards or PPC/ACQ. Interesting fact, that removing interconnect board P200 from PPC to ACQ on TDS7704B did exactly same – TekScope app stopped working and hung on welcome splash screen. This gives us information, that TekScope app needs to communicate successfully with PPC and ACQ boards to be able to start.

After some checks of x86 side of scope and trying to run few HDDs with Windows 2000 no obvious problems was found. CD-ROM drive was changed to DVD-RW from old laptop. Connection was standard notebook PATA. Original IBM Travelstar DARA-206000 6GB 4200RPM disk was changed to fresh IBM Travelstar IC25N020ATDA04-0 20GB drive. New Windows 2000 SP4 Professional was installed as maximum supported OS on this series scopes. Given current Celeron 850MHz CPU and 256MB this setup should run smoothly for beginning.

Moving our focus to PowerPC board as main suspect. This module There is handy debug 7-segment single digit debug LED, which according to service manual have next codes: This LED is located on PPC board near riser connector and easily visible even when outer aluminum shell is installed.

Our board during power up and after was rolling from “.8” code to “L”, stays there for couple seconds, and then restarting from start again, and doing this infinitely in loops. On working TDS7704B post code LED was going from “.8” to “L”, then when OS started goes to “P” and finally to flashing “-”, staying there when TekScope application running. Looks like PowerPC board unable to finish it’s booting sequence.

Due to age of these machines and usage of battery-backed NVRAM (Dallas DS1245) it’s not rare that onboard 3V battery (similar to ones used in usual computers for CMOS data retention) loose it’s voltage. Unluckily, boot parameters and configuration is stored in PowerPC NVRAM as well, so after battery failure scope likely to fail, due to inability to load boot ROM from x86 PC system HDD. Visual diagnosis can be done by observing TekScope application to hang on splash screen, and debug POST code indicator rolling codes over and over from 4 to L on PPC board. This is happening because when PPC boot loader lost its boot settings and cannot find correct ROM anymore, it reboots after 10 seconds to try again. That’s why it’s staying on “L” phase for 10 sec before it repeats loop.

First step is to replace faulty battery and allow Dallas NVRAM to be functional again.

Locate NVRAM on PPC board:

On CSA7404 it’s near NLX riser connector, and have PowerCAP module on top of DALLAS DS1245YP-100. PowerCAP is just simple PCB with BR1632 battery soldered on and plastic cover. I replaced old battery (voltage on it was 0.7V after removal) with new Panasonic BR1632A/FA. Make sure polarity is correct when soldering battery on. Latch PowerCAP with new battery back on top of NVRAM.

Now we need to reset again correct boot parameters. To do so there are few extra tools are required:

Then it rebooted and repeated above sequence again, and again, and again.
OK, so now we know that PowerPC board works, but obviously boot device “??D?h?” does not look right, thus it cannot load ROM and boot it’s OS.
So let’s halt auto-booting process by sending any char to terminal. By doing so we can stop loop and try to interact with PPC system. Now can send “?” command:

After some experimenting and searching web, I found somebody who had similar issues with CSA8000 oscilloscope. Tried very similar parameters and discovered that they work fine after minor modification for my system:

I used path to standard location on my x86 HDD partition, which is hidden folder c:\vxBoot. So if your location different – path need to be corrected. Inet/network addresses are used by internal interface between x86 and PPC. No ethernet cable was connected to either network ports on scope itself.

Now scope application able to run successfully, and I got first waveforms on screen :). Also seem like this particular scope got all options enabled, but some applications required for those options are missing, as I had installed fresh OS.
So system/software spec is:

Pretty nice set got there for use in digital/PC hardware development and debug. Scope input interface for all four channels is proprietary TekConnect, and inputs are all 50 Ohm only. So to be able use regular passive BNC probes high-impedance adapter system TCA-1MEG is required, to use 50 ohm direct interface to target environment one can use TCA-BNC or TCA-292MM or TCA-SMA. As drawbacks of high-performance capabilities of such high-speed scopes special probing accessories are required, increasing total using cost. Passive probes cannot be used without TCA-1MEG.

Using this probe is really using for debug hardware, like DDR interfaces on VGA/DIMMs/MB’s: 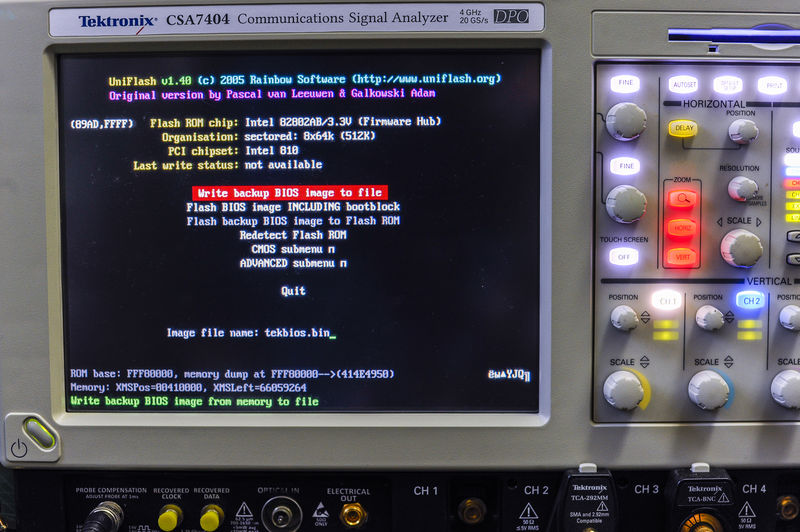 To get TekScope app to correctly show symbols like Ω and such, download these fonts and install them on your scope OS.