Main tool of most electronics hardware engineer is often an oscilloscope. Scope is your main eyes in device worlds, showing you what is actually going on your design. By comparing test result data with expected waveform, one can debug and trace issues and check important signal conditions. But what about firmware engineers, which work on complex multi-megabyte source codes for embedded systems? Oscilloscope in such case often useless, as data signals often not repetitive, come in long sequences, and probing wide interface such as parallel I/O or SDRAM memory bus would need lots of channels. It’s tedious work to trace and debug wrong byte in data dump of 5 millions of bytes using regular scope.

Dedicated logic analyzer come to address this case, and often are the main tool of firmware developers and digital design engineers. These devices operate similar to scope, but have tens or even hundreds of input channels available. Of course, this come at cost, so instead of capturing 8 or more bits of analog signal data, logic analyzer acquisition system triggers only on low or high signal levels, essentially behaving as very fast 1-bit ADC. Many LA’s have ability to adjust threshold level, supporting various I/O voltage levels and interfaces.

Let’s take a look on one example of such LA, old Tektronix TLA714, and do so in example of using it to debug SPI LCD issue.

Few words about SPI first. There are many devices, chips, peripherals and instruments which use Serial Peripheral Interface or SPI. Be it your computer, smartphone or tablet which you use to read this article, SPI is used there to transfer bits of data in easy and transparent manner. SPI uses a duplex communication protocol with a master/slave architecture and separate select signals. SPI is known as a “de facto” standard. This means that there is no formal standard (in contrast to NXP’s I2C), and as such wide variation of implementations exist. It is common to find different clock speeds, word sizes, and variations with 2- to 5-wire interfaces using SPI protocol. These variations can cause a lot of debug issues, and cause extra engineering efforts.

Most common, 4-wire version of SPI uses a clock, two data (one for each direction), and a select signal. Some manufacturers refer this as a 3-wire interface, highlighting select line as separate from the clock and data lines. Not rare situation to have select multiplexes or controlled by extra logic to allow complex multi-device topologies.

The signal lines for SPI are defined as:

SPI is capable of the fast speeds, up to 66-100Mbps and is capable of handling multiple slaves from a single master device. As throughput rates increase, considerations to the number of wires required by SPI and amount of devices on bus arise. The combo of configurations, along with the implementation variations and signal/timing integrity can rapidly become a complex test and debug task.

TLA714 have one 136-channel acquisition module installed, TLA7AA4 which we already covered a bit in this article. All four SPI signals from development board with test LCD were connected on inputs using one Tektronix P6860 probe.

Test system under scope had next topology:

Both master controllers can run initialize LCD code, and Controller A closed code firmware was developed by 3rd party. So we have no access to code and unable to see it’s LCD functions. If only test Controller B is used, no problems in LCD operation discovered, everything working as supposed.

Issue came when adding Controller A. LCD contrast setting get changed but it’s initialization code, resulting bad image display. By switching control over again to Controller B, LCD contrast can be set correctly. Logic analyzer is used to capture both data streams for Controller A and Controller B to find out root cause, why LCD is not working properly. Discovered information and test data result further provided to 3rd party vendor to correct their code and resolve the problem.

LCD resolution is 128×32 pixels, and each Controller init LCD and updates two frame-buffer images, so total more than 1024 bytes are send from each Controller, making analysis with regular scope or logic analyzer without transitional capture time-consuming. So 4-channel scope, even with MSO capability might make this debug bit time consuming.

Using TLA714 and decode library installed by procedure above, we can see screenshot of first data capture of initial SPI data stream. This covers initialization code from Controller A, which cause issue. 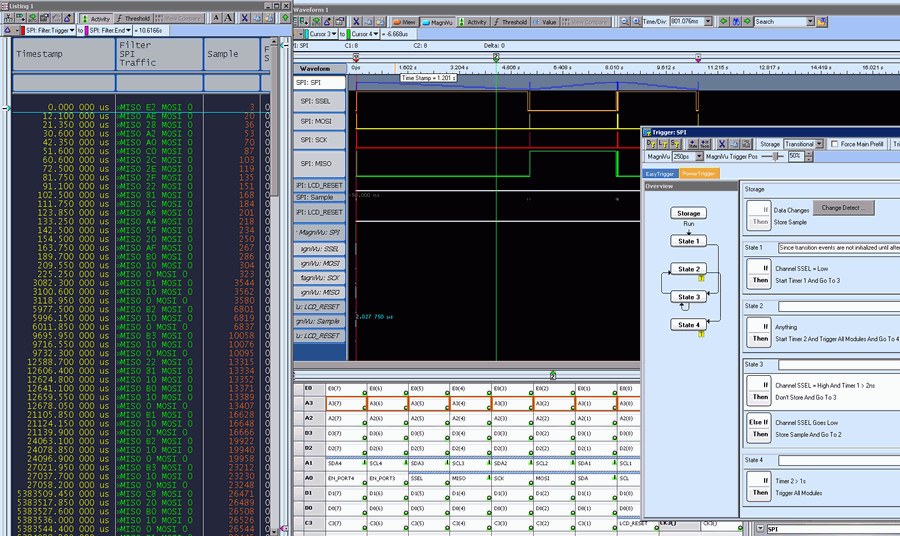 Initial setting and programming of LCD controller happens within first 30ms, followed by 5356 ms delay before next data packet group come.
Contrast setting configuration byte is 0×81 followed by next contrast setting data byte 0×1C. It takes just seconds to find out that first time correct contrast data is sent on timestamp 102.5us and 111.75us, as expected by reference initialize code.

But later this setting got overridden by repeating contrast setting databytes 0×81 and 0×10 on timestamp 12606.4us and 12624.8us. Thanks to easy view and decoded representation it was quick solution for specific problem case. Was it possible with oscilloscope or cheap USB LA? Yes. Would it be easy and quick like this? Perhaps not.

Setup screen configured for SPI capture shown below. This particular example have next hardware connections to SPI device:

Files used for support module listed below. These files should be located under “C:\Program Files (x86)\TLA 700\Supports\SPI\” directory

Also transitional PowerTrigger configuration available for download, if you want to capture only relevant SPI bit changed samples and not the fixed sample rate.

Even though Tektronix TLA714 and TLA7AA4 used in this article are long obsolete and not supported, they are still useful for today engineers problems. Secondary market have plenty of these analyzers available in various conditions and prices, together with probes and support equipment. Of course there is a drawback to have large and bulky mainframe on your desk, but in many cases having one ready can save lot of time in complex designs. Benefit of such kit is also selective data storage compression (idle samples are not stored, not wasting precious sample memory buffer), advanced triggering and state machines and fast speeds available. I was able to debug and see signals on DDR3 1333MHz memory bus with TLA714 and TLA7AA4 module. Modern analyzer capable of such speeds would cost tens of K$USD.

I hope posted unofficial software module would help other owners to develop and share their own interface plugins, suitable for use in these old TLA7xx series machines.