Keithley 7168 nanovolt switch card and it's use with RPI

This card is designed for use in Keithley 705 and 706 switching mainframe unit. It’s also supported by modern Keithley 7001 and 7002 mainframes. However performance of this sensitive nV-scanner specified only for Model 705, due to presence of switching power supply in 700x units. We will test the impact of using SMPS in our DIY setup.

Test setup to be – Raspberry Pi as controller, EM A10 nanovolt amplifier as output head and 8½-digit DMM as digitizer.

There are total eight inputs channels available for switching, with single output. Both HI and LO signal paths are routed symmetrical. 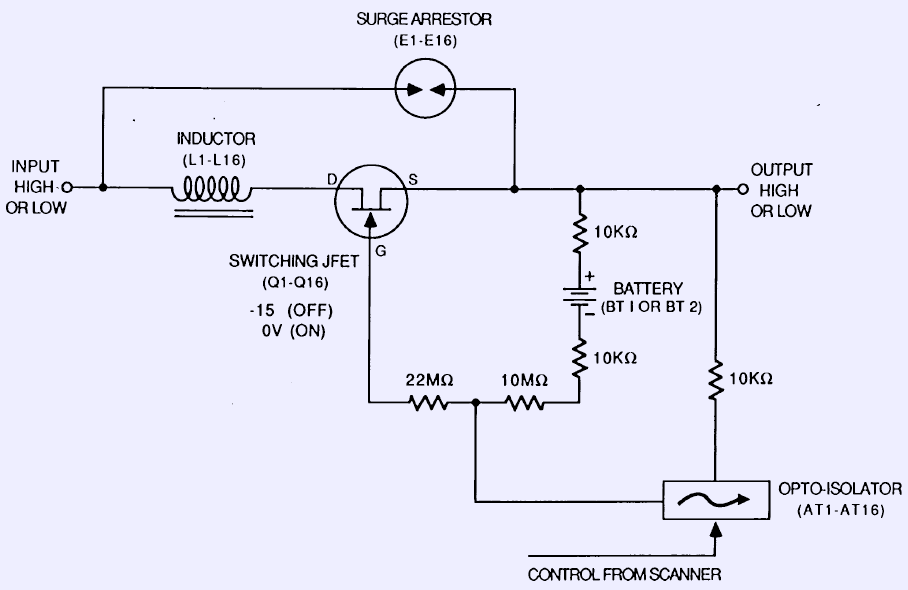 Both high and low sides of each channel are switched by N-channel JFETs Q1 to Q16. Channel is open (high-impedance) when JFET gate driven at negative -15 VDC and closed (low-resistance) when gate voltage is kept around 0 V, referenced to JFET source.

Multiple channels can be closed simultaneously, so pay attention during programming and configuration. It’s worth to test program code on “dry” runs without actual signals connected to card input channels.

Dissimilar metals, in contact with each other, produce a small voltage. This voltage value depends on junction temperature and is therefore called a thermal EMF. The rate of change of this thermal EMF voltage with temperature is a function of the metals used in combination. The sense of the voltage produced is either positive or negative, depending on which side of the combination is being considered the input. Most, if not all electronic components, even simple resistors, capacitors, diodes have internal intermetallic combinations, and eventually connected to PCB/wire copper conductors as a final junction. Hence, copper is the typical reference metal in thermal EMF figures and analysis. Here are some examples of typical thermoelectric coefficients (also known as Seebeck coefficients) of bi-metal connections with copper.

To minimize thermal offsets use only fresh clean copper wires and spade lugs. Do not solder connections to avoid dissimilar metals on contact area. Soldered connection can make parasitic offsets 1-3µV/°C, which is significant source of error for precision measurements. Make sure surfaces of copper contacts shiny, as copper oxide have very large thermal EMF. If copper oxidized, use soft abrasive pad to clean connections and attach wire immediately. Proper copper-copper connection have typical offset of 0.2 µV/°C or less, while oxidized/tinned connection can be more than 1000 µV/°C. 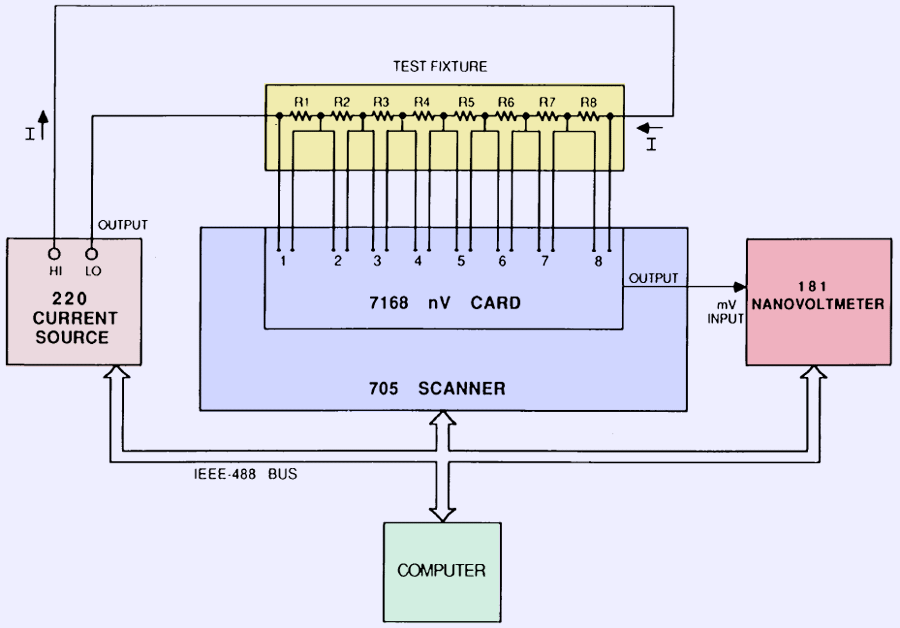 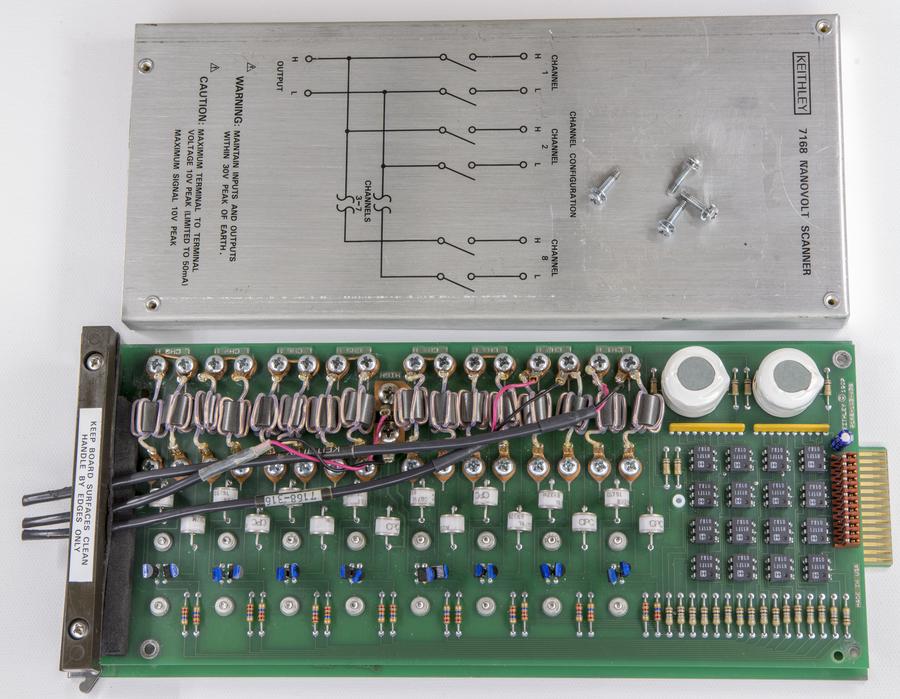 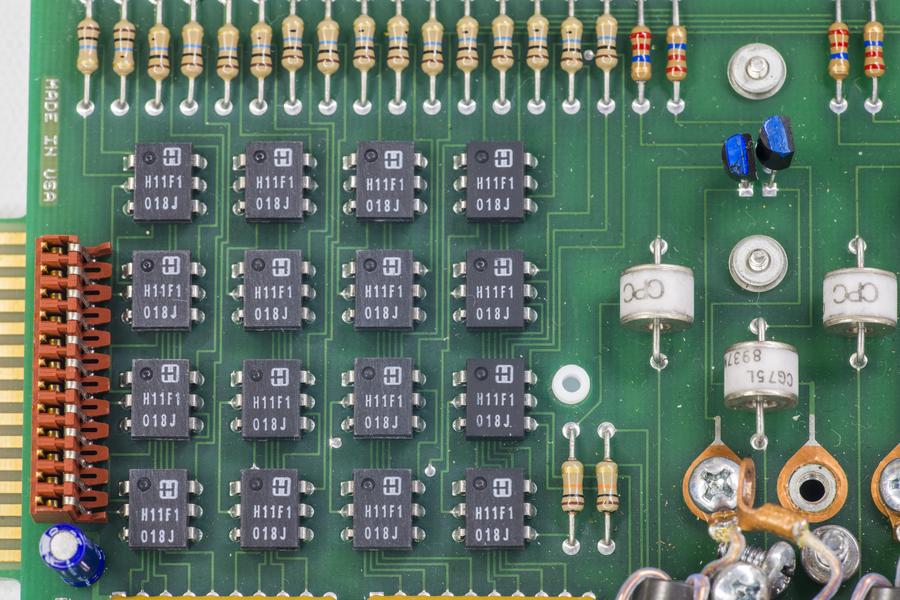 JFET switching help to avoid relay self-heating offset errors. It also allow for channel resistance to be repeatable and consistant over long time, which often important for metrology applications. 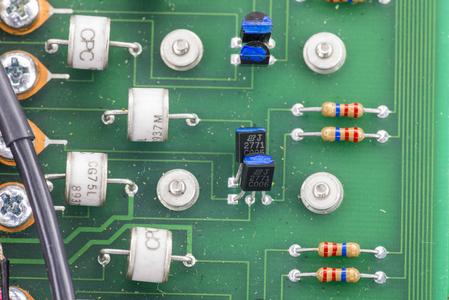 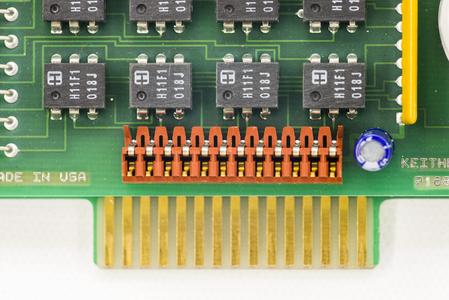 FETs used in Keithley 7168 can close channel to output with series resistance around 10 Ω. Usually it’s not a problem, as in typical nV-scanner application output connected to high-impedance sensitive voltmeter. With typical impedance >1 GΩ resulting currents thru JFETs are in picoampere levels, and temperature increase of switch junction is essentially zero. However if low-impedance device connected on the output (such as ADC front-end) large mA-currents could flow thru scanner. It’s recommended to let channel stabilize for few hours to reach required thermal equilibrium for best accuracy. 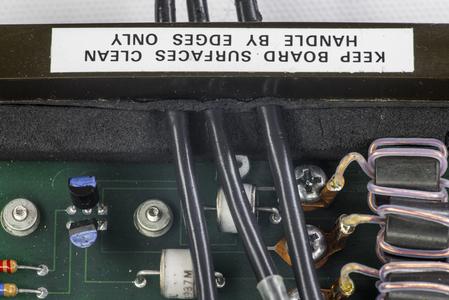 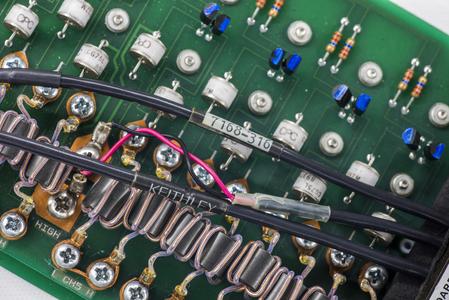 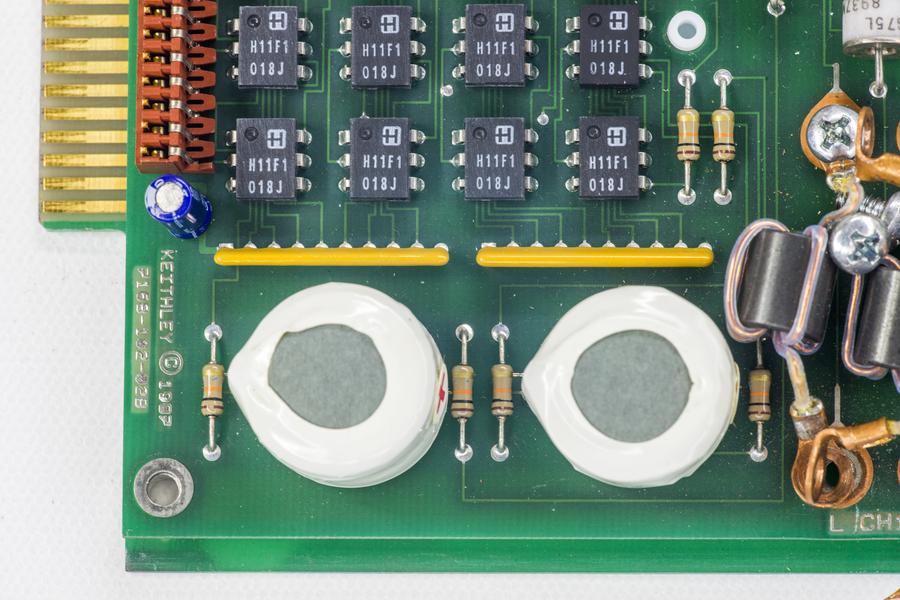 Due to isolated interface Model 7168 scanner card have separate onboard power source, which is two 15V lithium batteries. These batteries provide required bias voltage for JFET switches. Be careful not to short battery exposed pins when removing shield and making connections.

Battery BT1 supply bias for HI side of JFET switches. Second BT2 supply bias for LO side channels. Use of two separate isolated batteries allow to maintain high isolation between both high and low signal path on each channel. 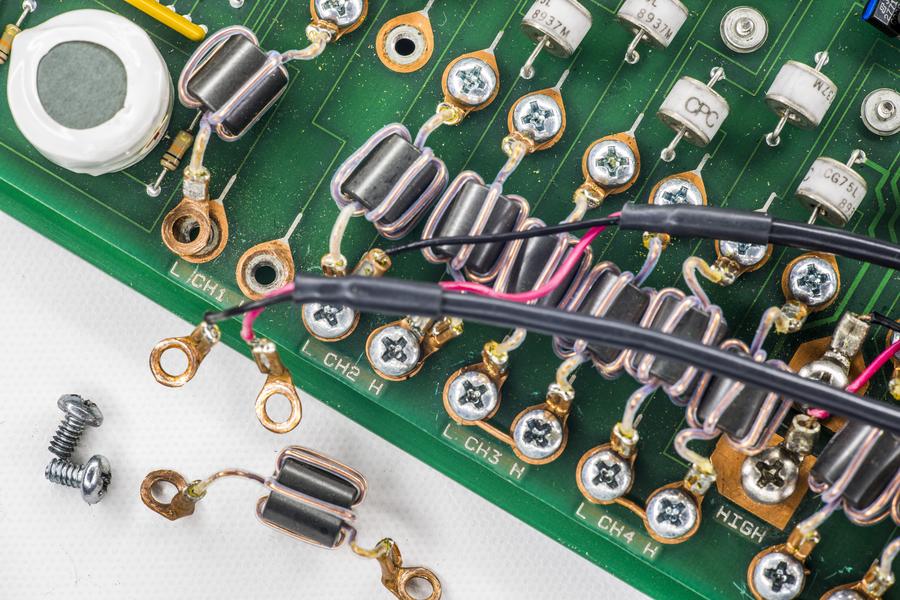 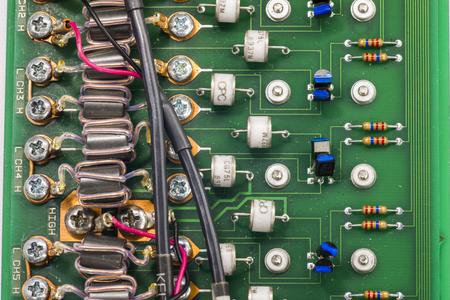 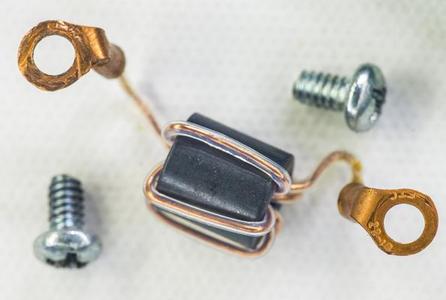 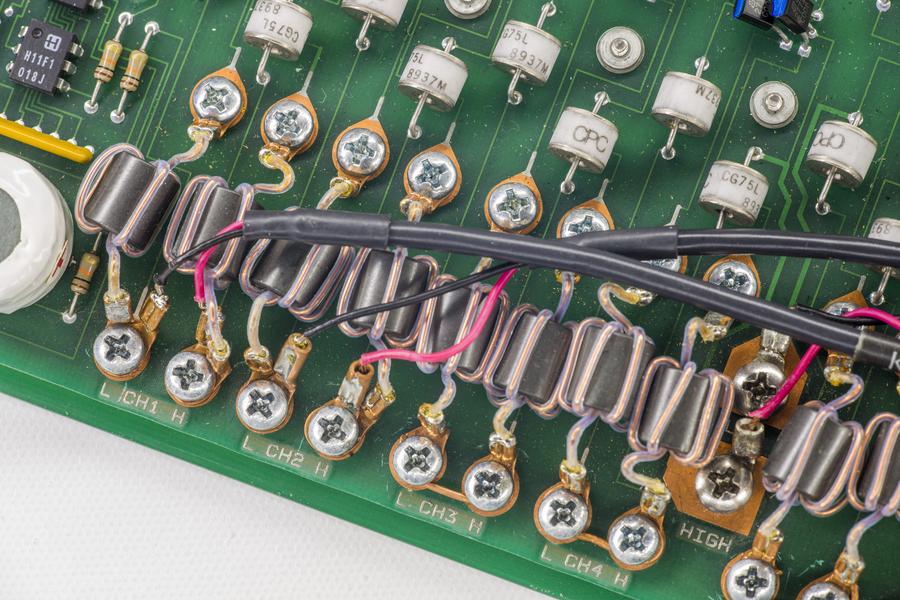 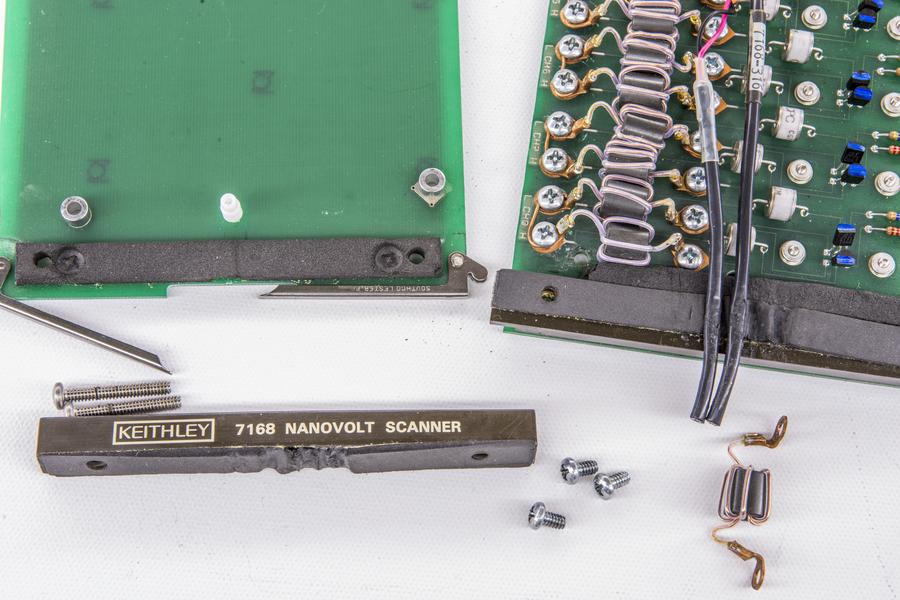 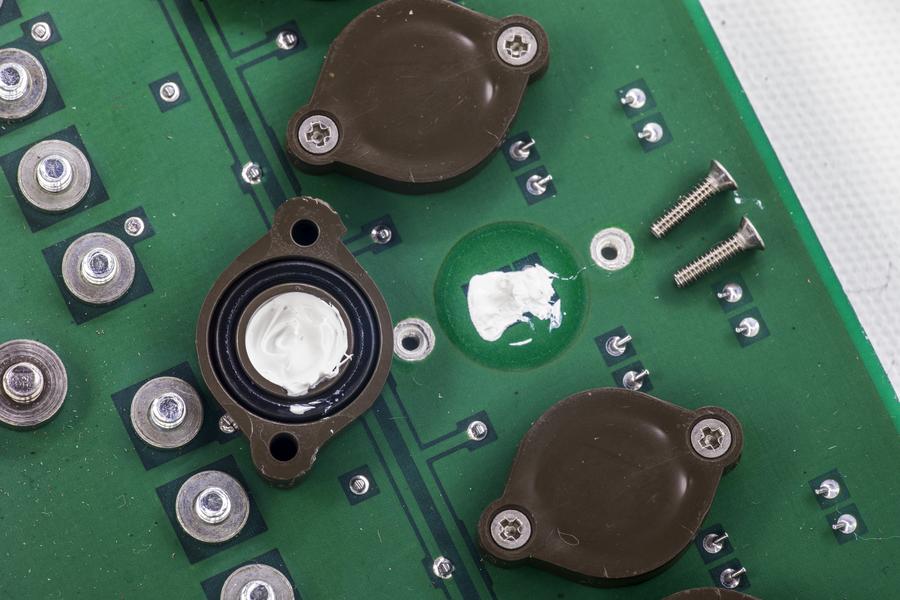 To control scanner card actual Keithley 7001 backplane board 7001-176 was used. This board have UCN5841A serial 8-bit latched drivers, so with simple SPI interface and Raspberry Pi we can control. Keithley 7001 I have was salvaged for parts (front-panel VFD, parts from digital board) but chassis and power supply are still good and useful for this project. Raspberry Pi brings second life to these parts, and provide modern LAN interface for easy programming and control. 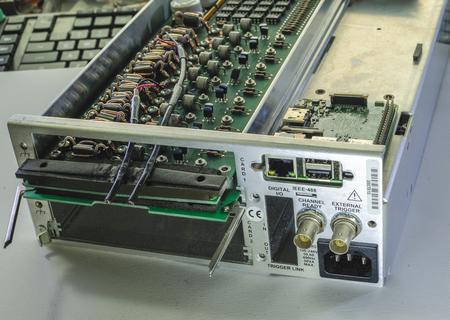 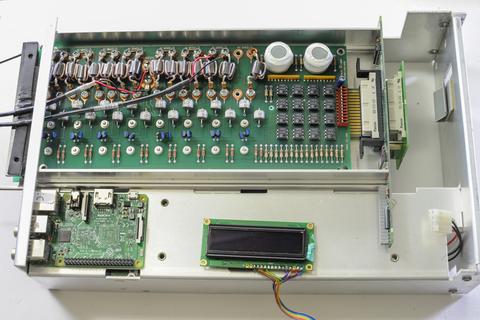 And installing card into top bay brings this map for SPI code. 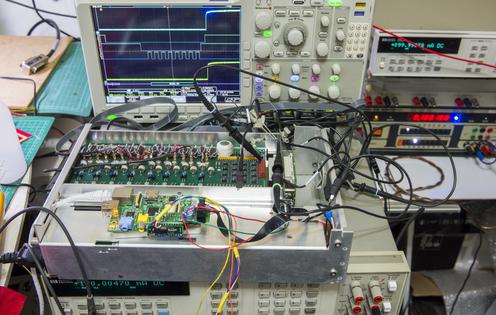 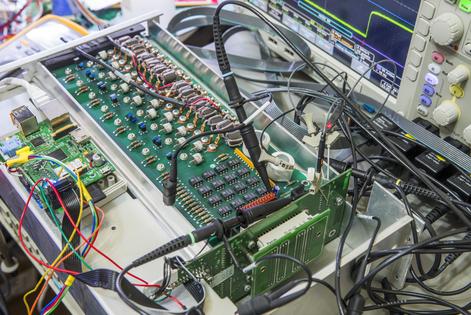 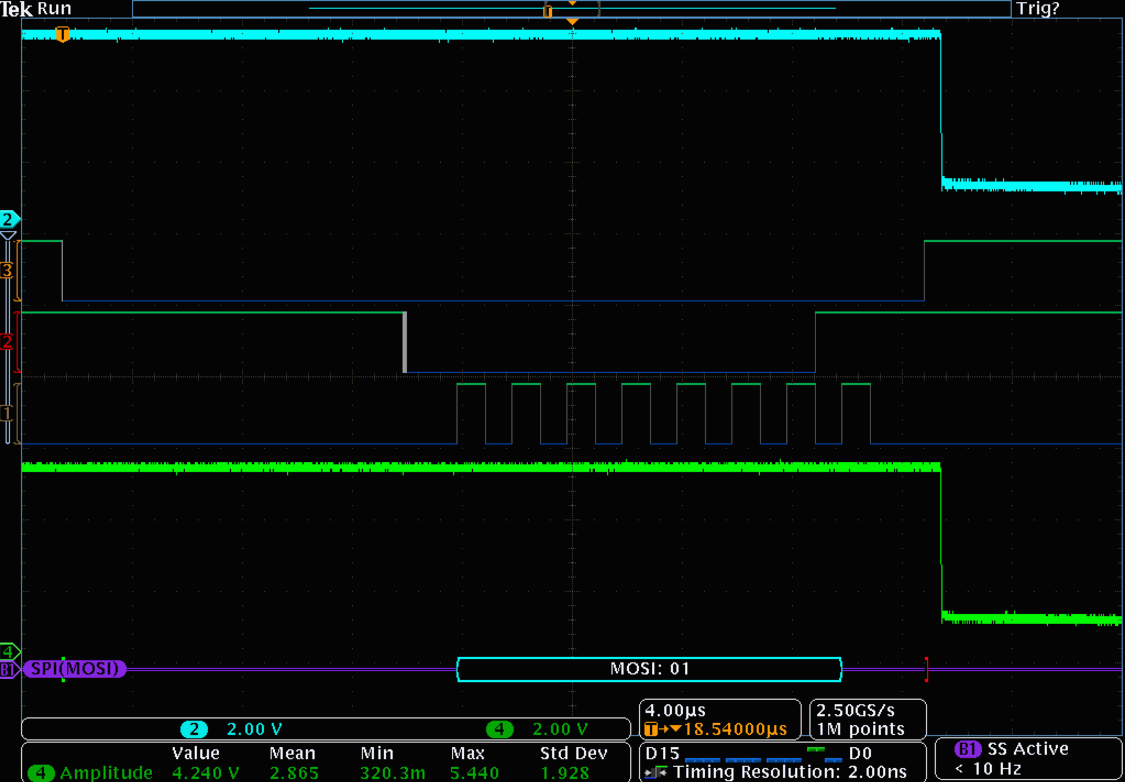 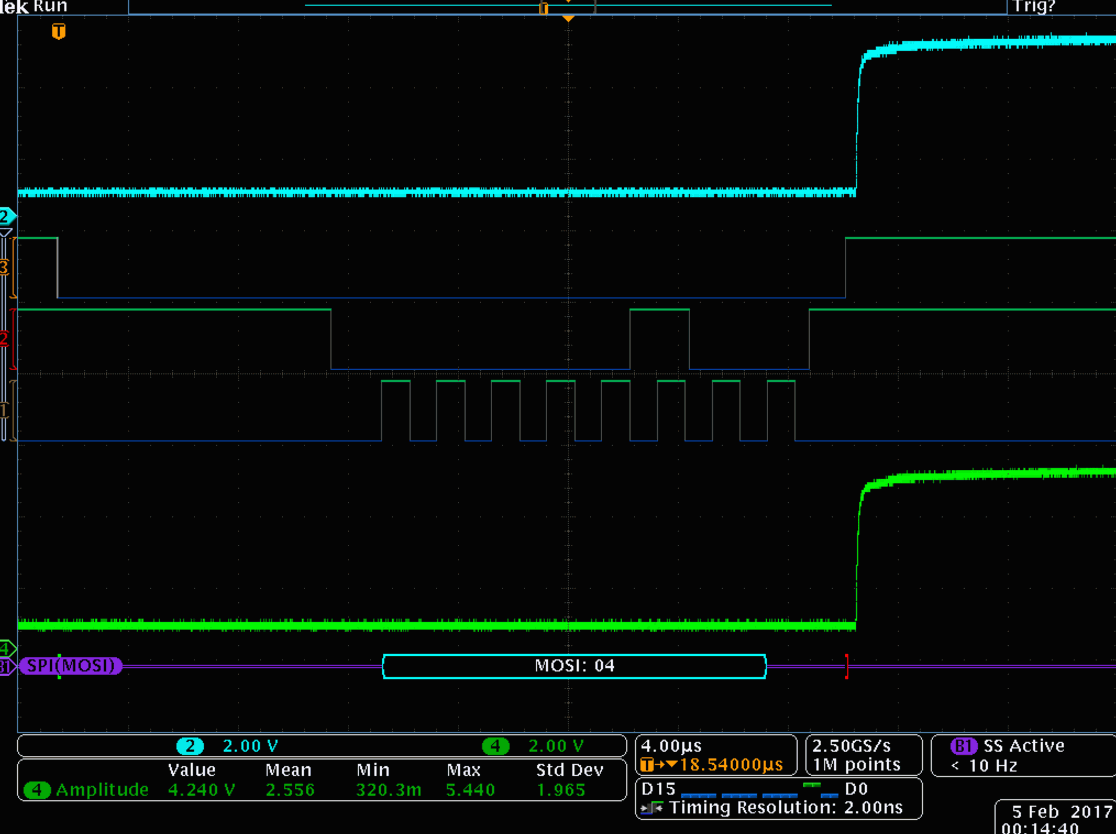 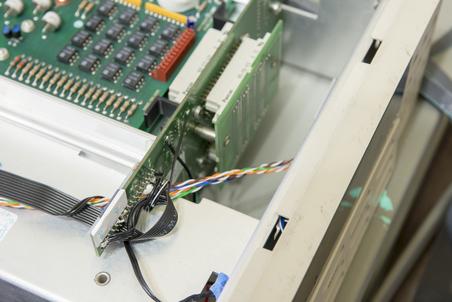 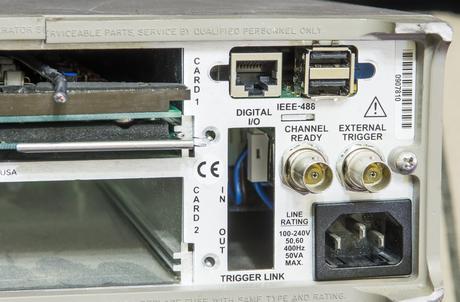 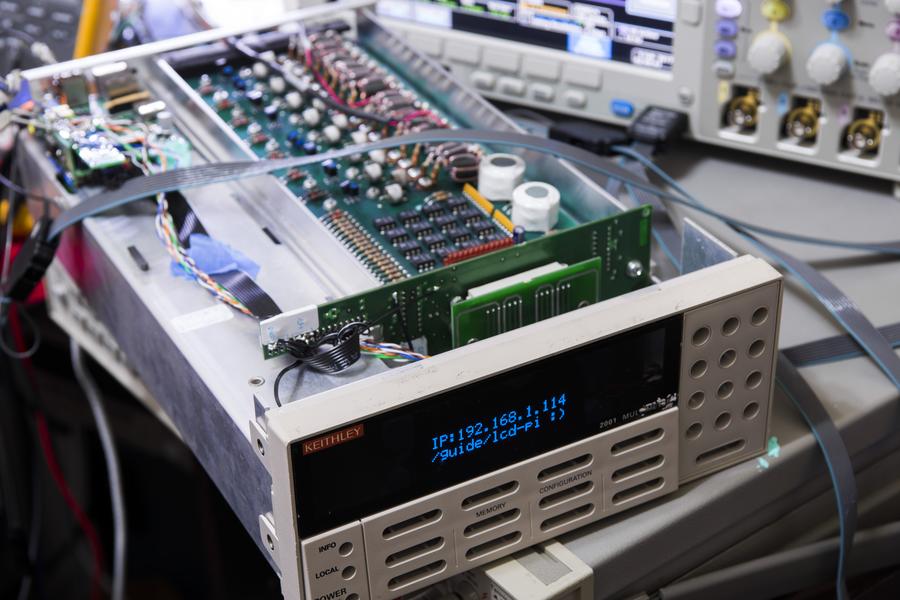