ESI (today under IET) used to build and make hammon-style dividers build with high-stability wirewound resistors for accurate fixed ratio transfers with sub-ppm uncertainty. These devices are sold under model names SR1010, SR1030, SR1050 and as a set in SR1060 system.

SR1030 is improved version of SR1010 with hermetical enclosure filled with oil. SR1050 are high-resistance models with switches instead of individual 4-wire taps.

Using resistance bridge systems such as ESI 242D or 242E these transfer standards can be very useful to verify and provide accurate decade calibrations for resistance standards. It is also handy tool to have as precision multi-tap voltage dividers when used in airbath to ensure stable thermal conditions. Today use of SR10×0 units is limited to budget metrology, as for high-end resistance measurements it is easier to use automated DC current bridges, such as Measurement International 6010/6000D or Guildline 6622A.

There are also special versions of these SR10*0 standards:

Resistor standard is packaged in nice sturdy metal enclosure with 5-way binding post. Based on label, this unit was manufactured and calibrated September 29, 1969. Almost exactly 51 years ago! 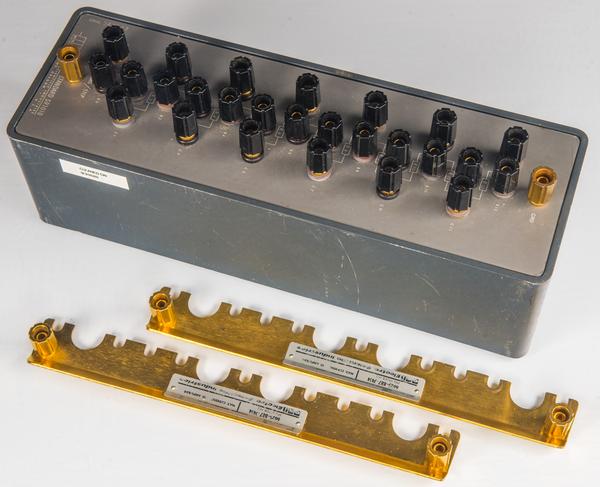 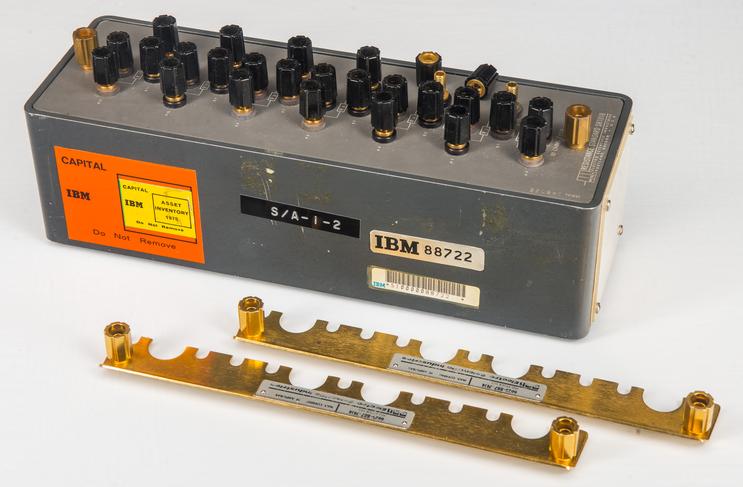 Each of SR10*0 resistance standards calibrated at factory to specifications and measurement results are attached to a side label. Label on this particular unit reproduced in table below. All benchmarks performed at standard +23.0 °C lab temperature, on 9/29/1969. 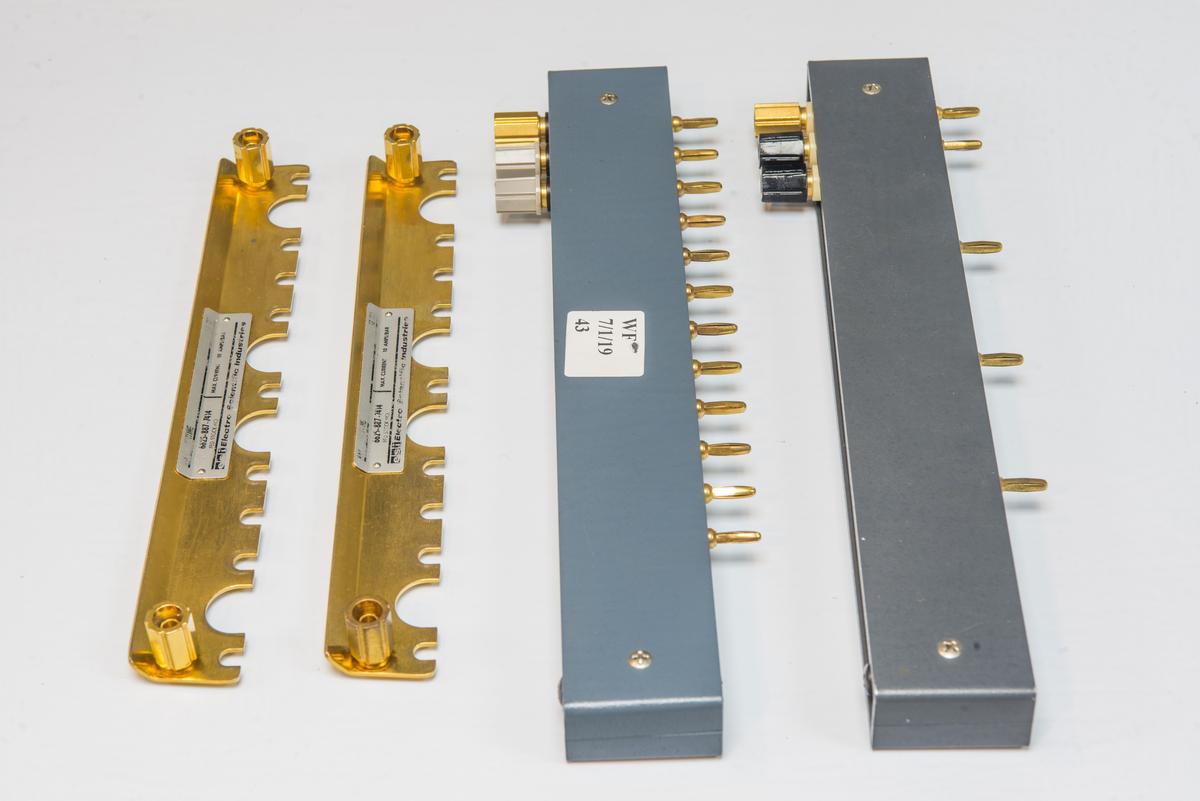 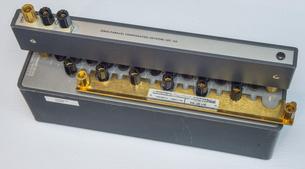 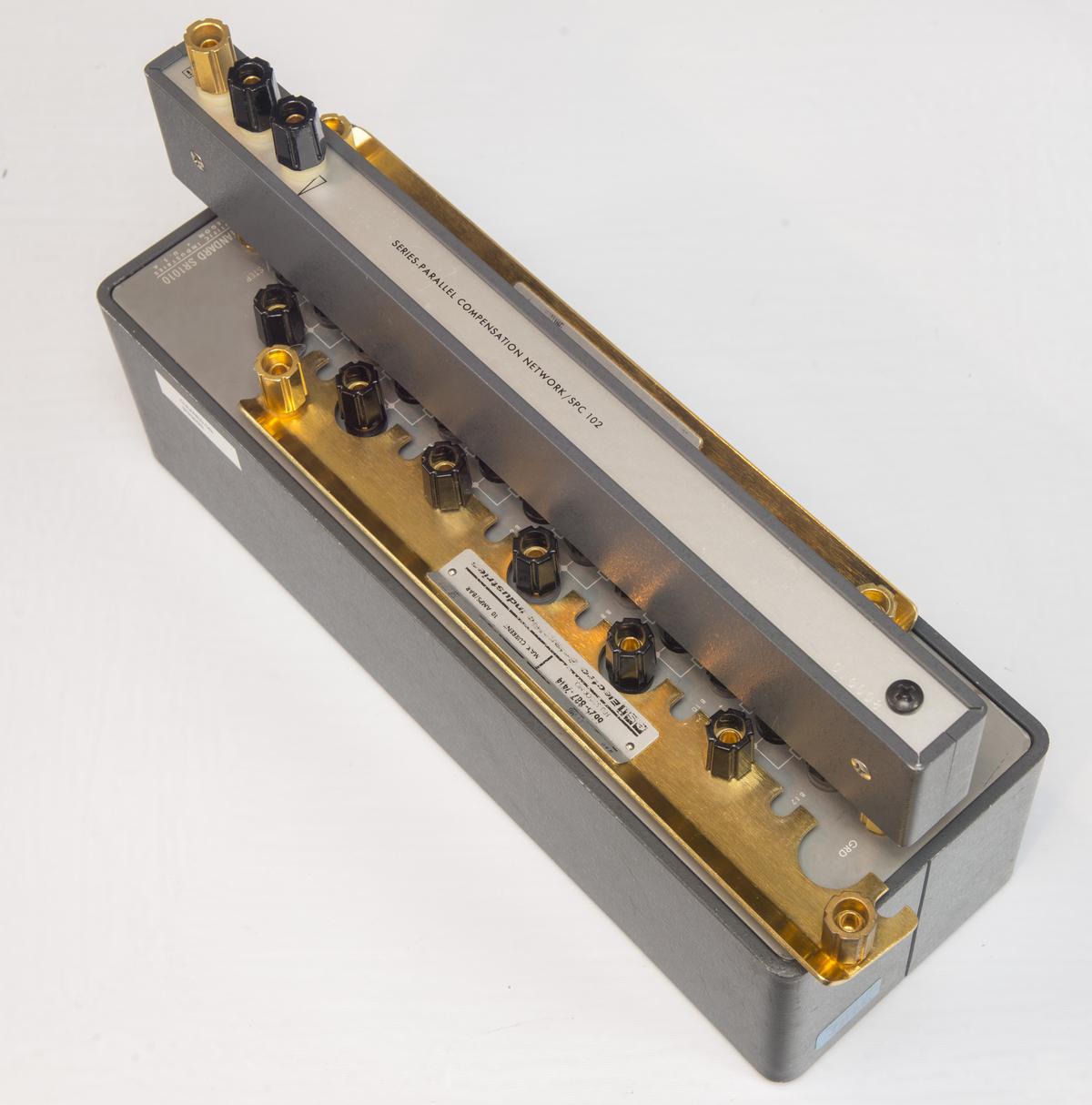 Actual setup and instruments used for this test are shown on photo below. Method to measure temperature stability of each SR1010 element is to utilize precision high-stability calibrator (Fluke 5720A, calibrated August 25, 2020 against our traceable 1 Ω, 10 kΩ and 10 V standards) and array of 7½-digit and 8½-digit DVMs. 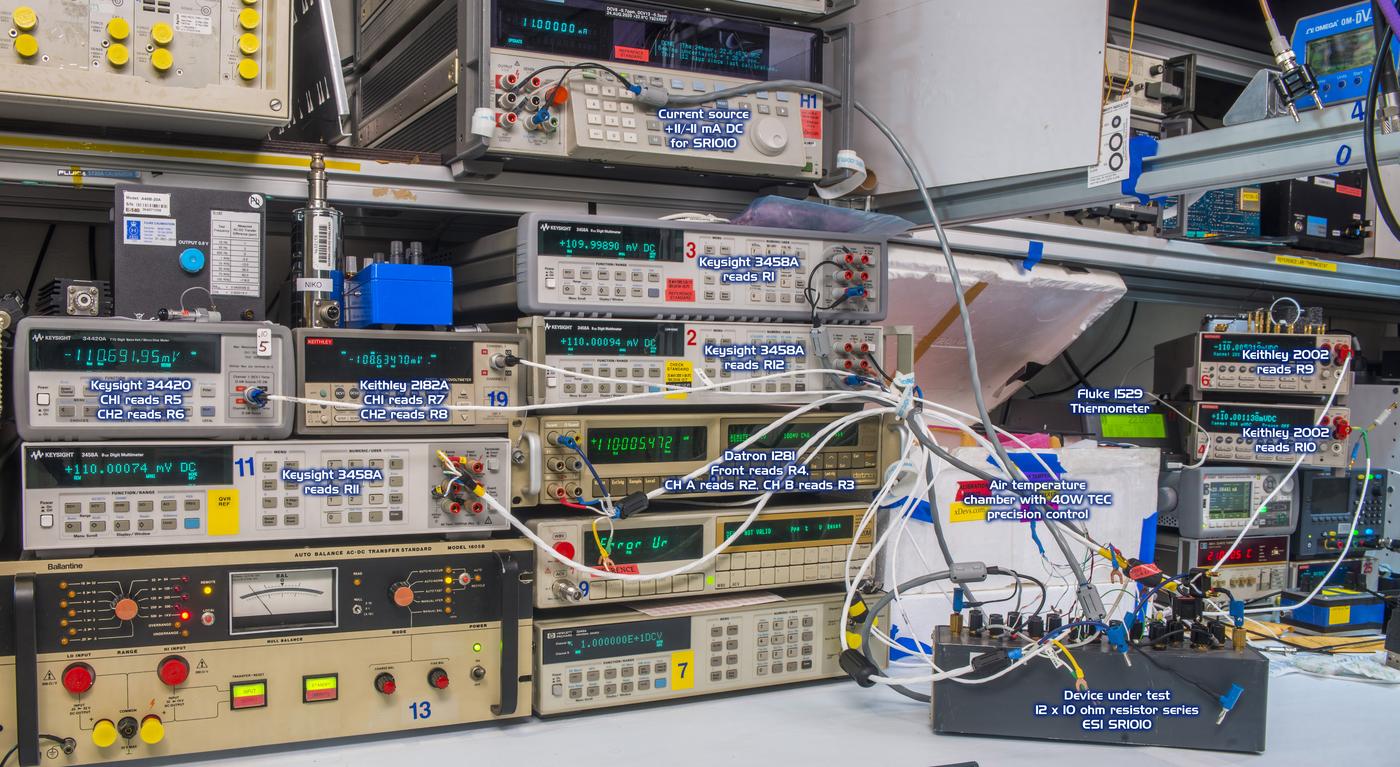 DUT ESI SR1010 is shown outside of thermal styrofoam box for clarity. During actual test divider was sealed in the chamber with 40W watercooled TEC device to provide precise and stable cooling and heating capability. All connections to digitizers waas done using low-thermal cables with spade lugs, except one cable routed to Datron 1281 front terminals. 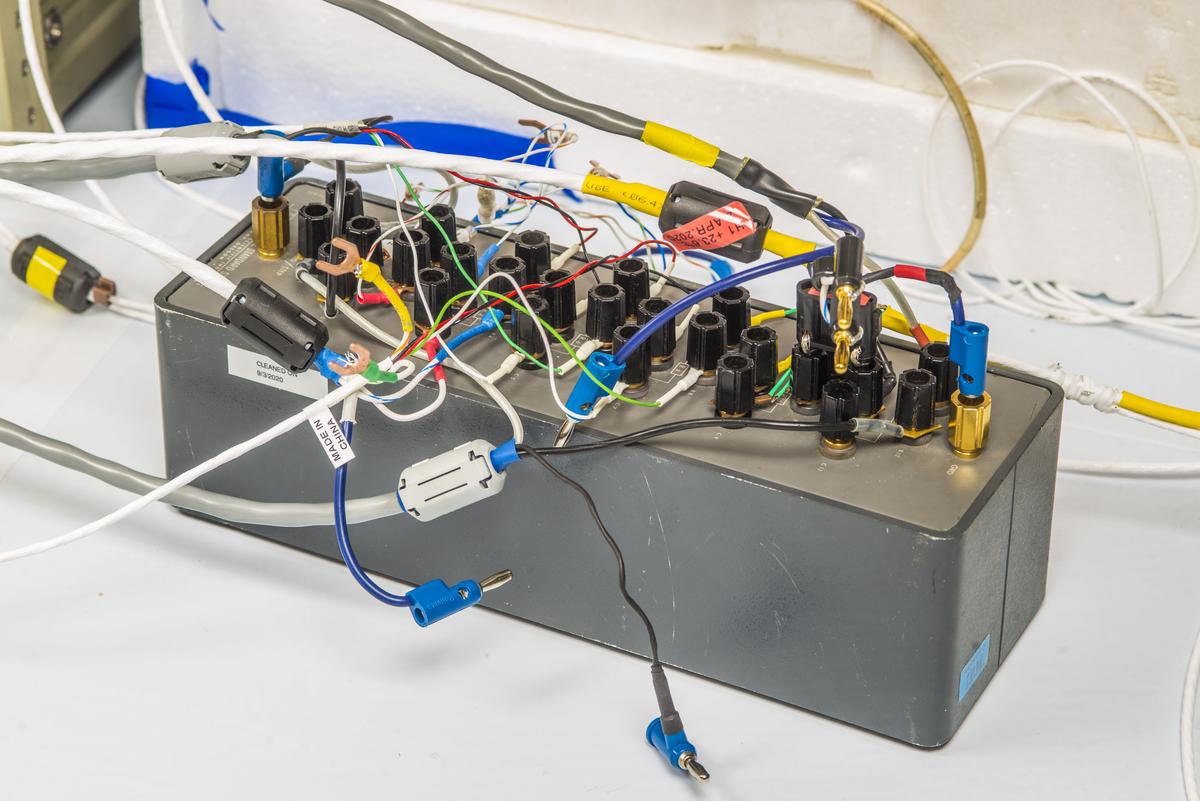 There is mixing fan to maintain air temperature uniformity. More details about chamber construction is shown in this article 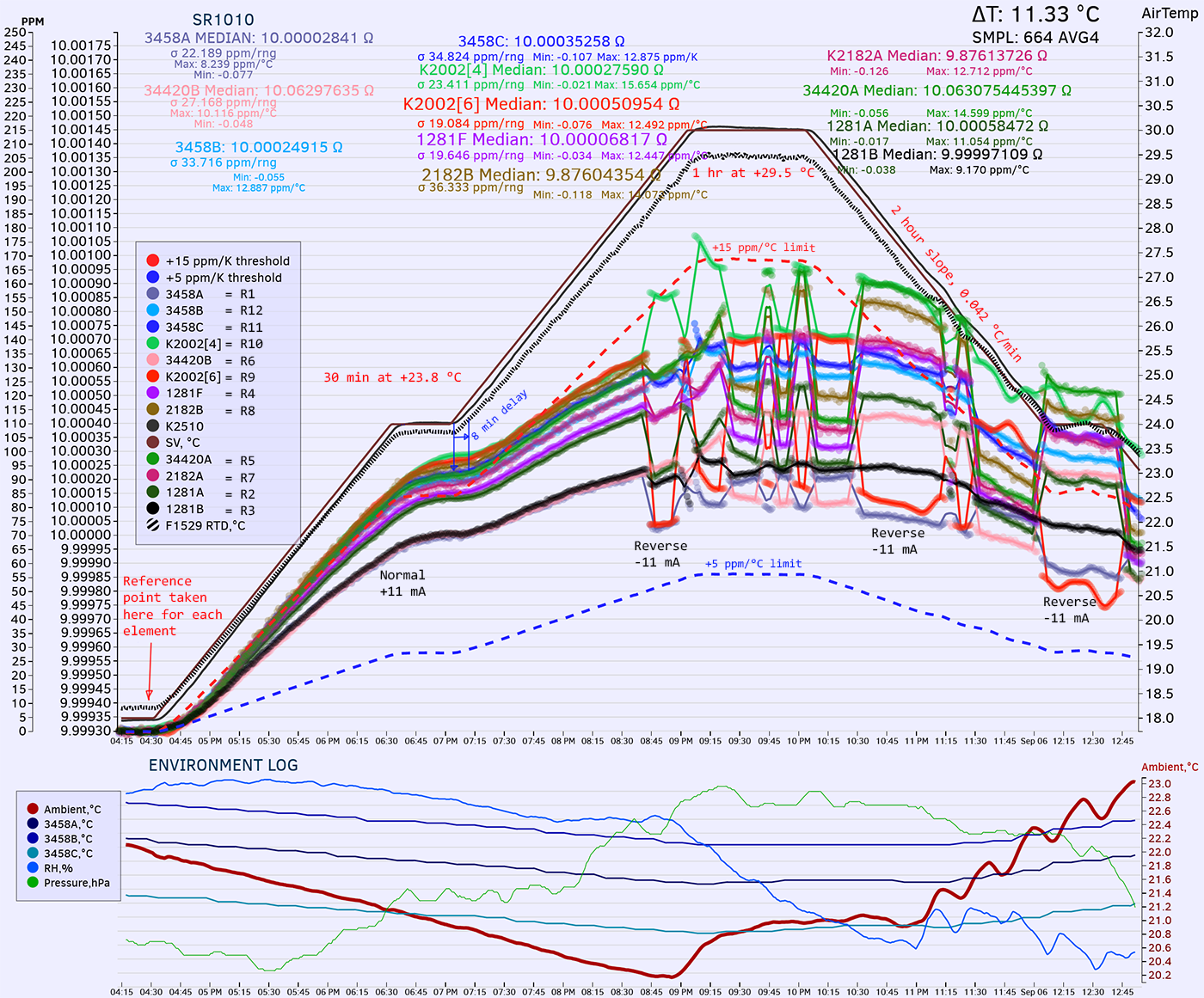 Based on these measurements, we can estimate that thermal EMF error contributed maximum 5.3 ppm, and composite temperature stability between all resistors (median of all individual results) is +11 µΩ/Ω per °C which is much larger to specified ±1 µΩ/Ω per °C for SR1010LTC-10. Perhaps it is due to old design, which does not have suffix SR1010LTC. Such model for 10 Ω/step is no even listed in the specification datasheets, where only LTC-version is specified for this step size.

Credits go to EEVblog member Nikonoid for this resistance standard benchmark and review.