Charger/power supply is originally manufactured Fluke 792A Power Pack, only difference is added ultra-stable 10V reference module, mounted in own shielded enclosure, internal to the power pack. Reference is based on proven Linear LTZ1000A super-zener design, build details are shown in this article. Reference was running on constant power since January 2018. 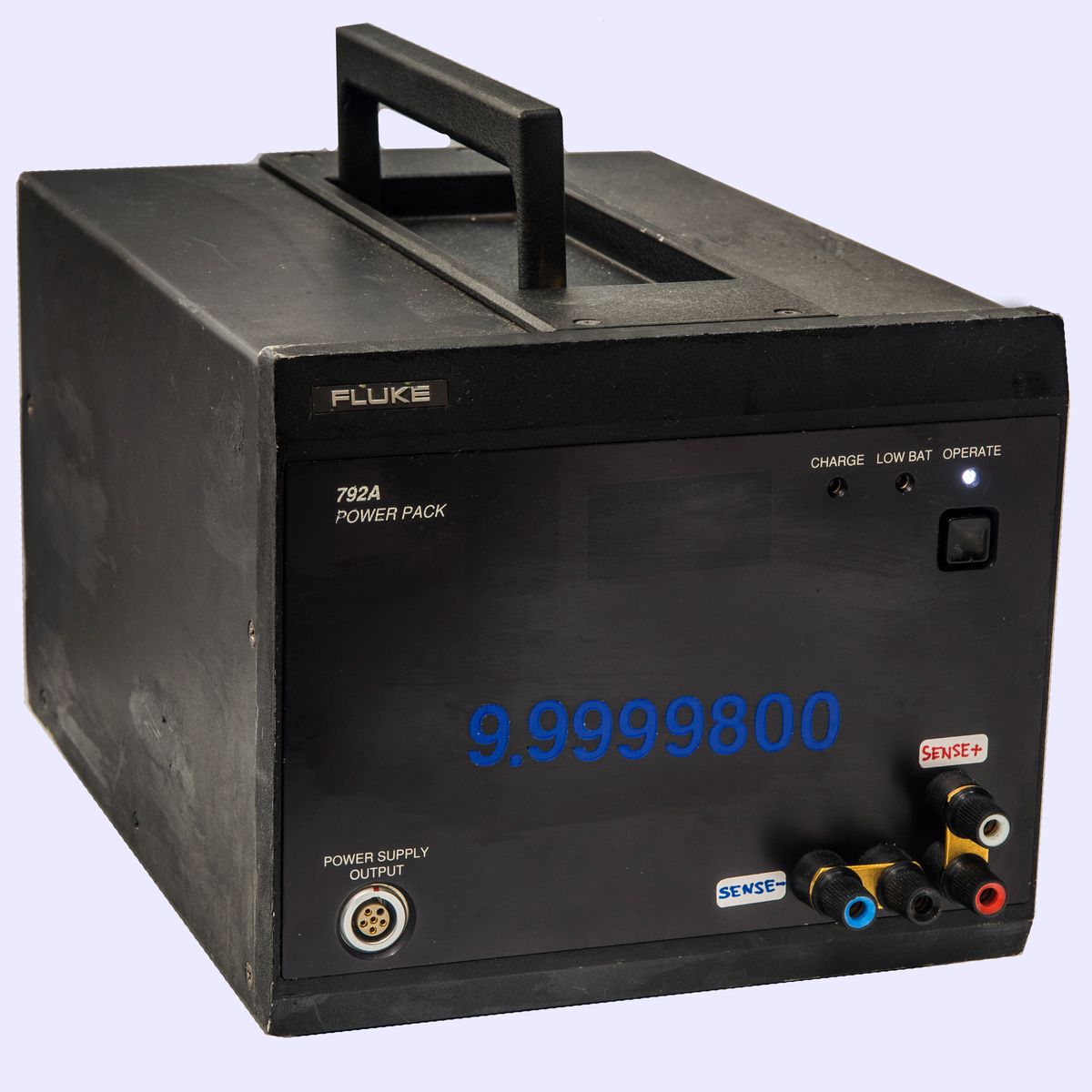 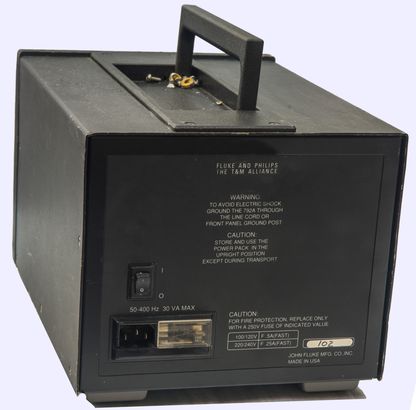 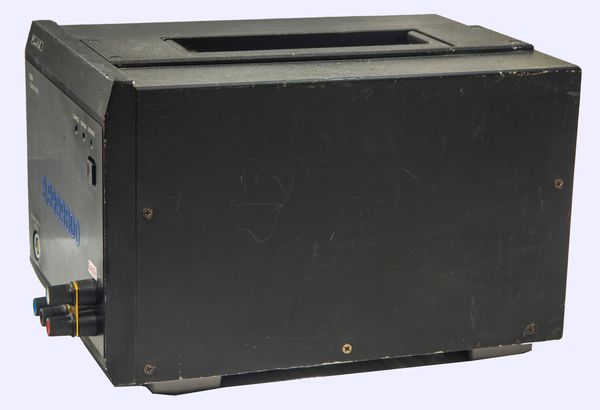 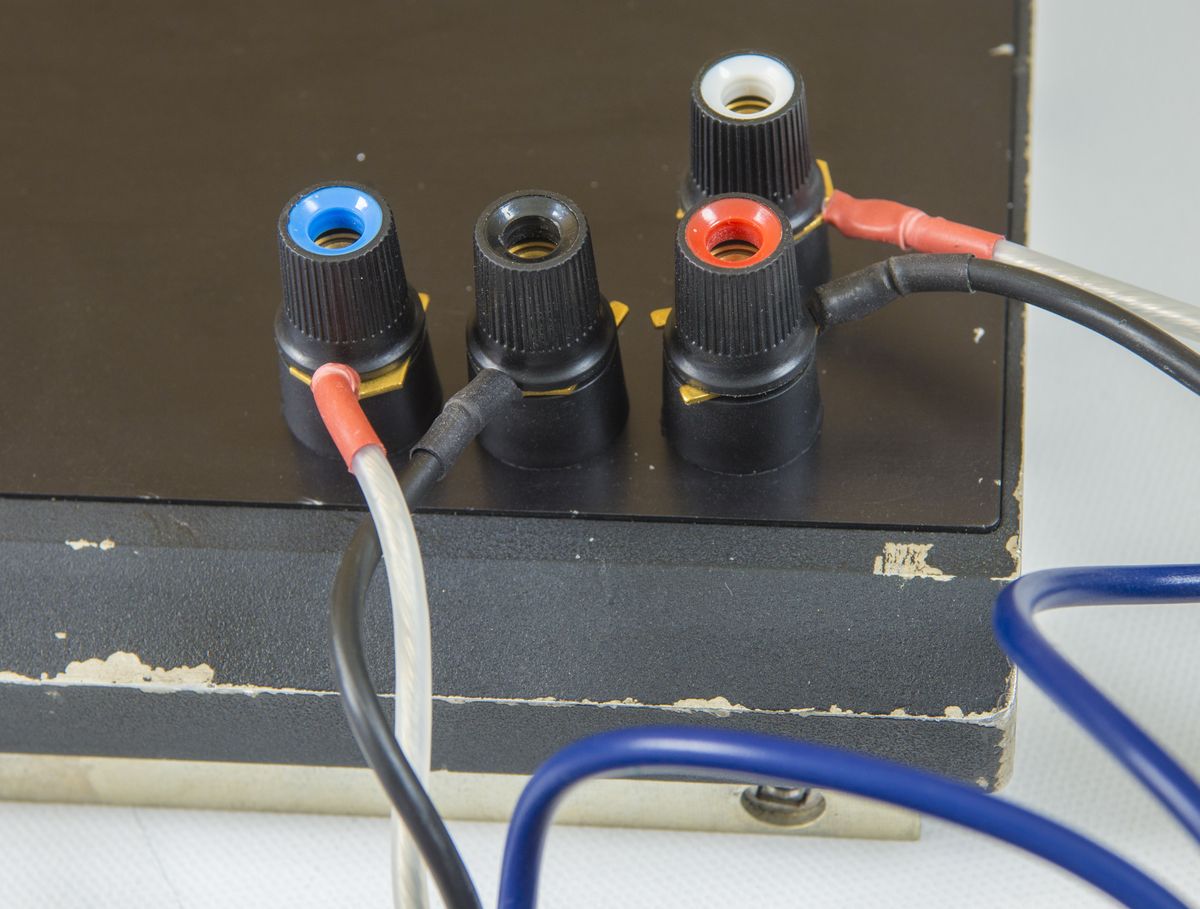 *For high-impedance loads, such as 8½-digit DMM or Fluke 5720A calibrator output terminals sense must be shorted with force, using heavy gauge copper bars.
Bars are included with standard when it’s shipped to calibration.*

Reference is portable and designed to fit into transport case, such as Pelican 0340 or similar. It contains all necessary hardware and only require AC 110/230 VAC mains power for continuous operation.

To maintain battery charge unit has original Fluke 792A power pack charger. Unit provides two modes of operation, exactly like standard Fluke 792A Power Pack. Linear power supply can provide ±11 VDC output at the LEMO port for use with Fluke 792A Transfer unit. While unit is in OPERATE (WHITE LED is ON) – mains power is disconnected by relay from the battery charging circuit. If battery charge level too low, WHITE “OPERATE” LED will be turned off and “LOW BATT” RED LED will be activated instead. If this happens, connect AC mains power AND switch unit to STANDBY MODE.

When unit is switched to STANDBY mains power will be connected to charger, and batteries will be charged until full. Low-Dropout Regulators provide stabilized power for the +/-11 V output supply only when unit is in OPERATE. However LTZ1000A-based reference is powered directly from the internal batteries and POWERED ALWAYS, disregarding what is the mode of 792A power output.

Caution! There is no low battery shut-down function in xDevs.com 792X reference. If unit left on battery power or OPERATE mode (WHITE LED ON) for more than 72 hours, batteries will be depleted. There is no automatic switching to charging, even if mains power is connected!

Do not leave standard unpowered after LOW BATT red LED is active. This condition will invalidate +10 V output calibration history and cause catastrophic damage the unit and require battery replacement!

This section outline output calibration procedure. Procedures use direct comparison between xDevs.com 792X, called later the Unit Under Test (UUT), and a certified and traceably calibrated Fluke 732A/B/C or Datron 4910 standard called Standard Reference (SR) to calibrate the 10V output. There are no means for output adjustments for xDevs.com 792X reference and calibration include measurement comparison only.

Table below shows complete list of the equipment you will need to calibrate the 792X output.

Before proceed, leave xDevs.com 792X UUT and Fluke 732 SR powered on with the BAT switch set to [|] and the standard plugged into AC mains line power for at least 24 hours. Make sure UUT is in STANDBY mode, indicated by left RED LED. This ensure stabilized oven temperature in standards and fully charge the internal battery.

xDevs.com 792X is shipped with two heavy gauge copper bars between SENSE and FORCE terminals. Do not remove the shorts for calibration procedures.

Make sure both standards are located away from any equipment that generate heat or airflow, such as calibrators, DMMs or lab power supplies.

Ensure absence of forced airflow or drafts near both UUT and SR output terminals to avoid excessive noise due to thermal EMF.

Avoid the use of ordinary, nickel-plated, banana plugs for equipment interconnections. These will cause errors that negatively affect calibration accuracy. Use only copper connectors that have small thermal emf’s with respect to copper posts on standards.

Use the Fluke 5440A-7002 Low Thermal EMF Cable Set or alternative low-thermal EMF wiring. Use #24 AWG or larger bare copper Teflon®-insulated connecting wires. It is preferable to use shielded, twisted pair cable. Avoid splices or any adapters between standards. Use low thermal emf copper spade lugs. Crimp the lug onto the wire and solder the connection.

Inspect standards, ensure there is no physical damage. Preserve packaging, and let standard sit for at least 24 hours after transport. Mains power should be provided to unit, and “CHARGE” LED should lit red.

Keep included shorting bar between SENSE and FORCE terminals on 792X standard connected at all times. 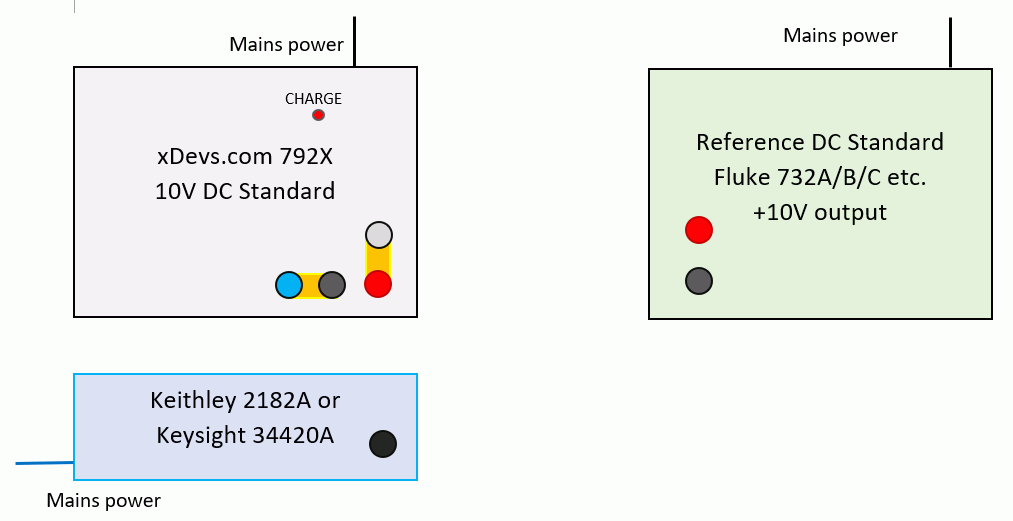 1. Disconnect mains power cable from xDevs.com 792X UUT. Switch power button until white “OPERATE” LED is activated.
2. Connect calibrated Fluke 732 SR and DC Nanovoltmeter as shown in figure below. Use most sensitive range without overflow on the nanovoltmeter.

3. Monitor the meter readings and allow the thermals to stabilize. 10 minutes is reasonable time frame for this operation.
4. Average the meter readings over a period of at least 1 minute. Record these values. Recommended to take median of 5 last readings.
5. Reverse the HI (RED) and LO (BLACK) (positive and negative) leads on the meter. 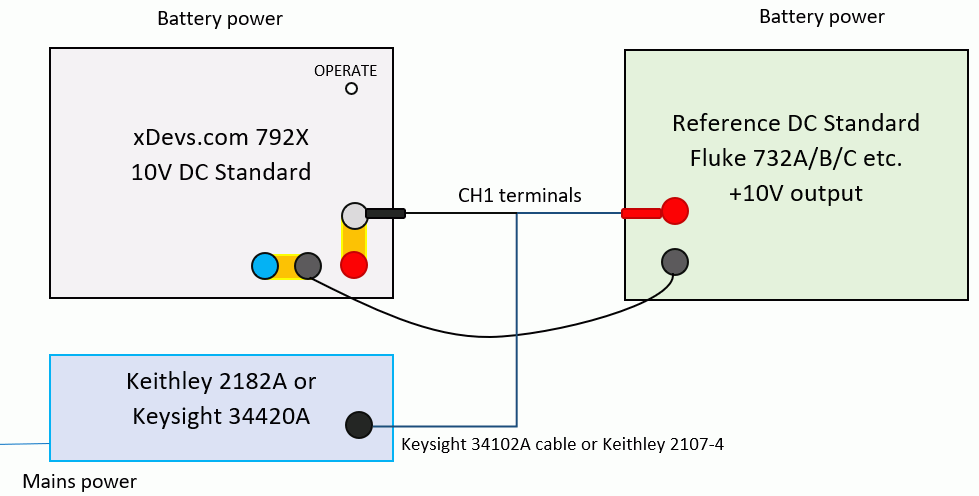 6. Monitor the meter readings and allow the thermals to stabilize. 10 minutes is reasonable time frame for this operation.
7. Average the meter readings over a period of at least 1 minute. Record these values. Recommended to take median of 5 last readings.
8. Subtract the readings from step 4 from the readings from step 7 and divide this result by 2. This is the difference EMF between the two devices. The value could be negative.
9. Add the value from step 8 to the value from the certificate for the calibrated Fluke 732 (SR). This is the value of the xDevs.com 792X UUT.
10. Disconnect all test equipment. Connected mains power cable back to xDevs.com 792X and 732 standard. Make sure to switch xDevs.com 792X to CHARGE mode with RED led on.

UUT can be calibrated directly against SI Volt realization by JVS system, when operated floating and has output noise and stability similar to industry standard Fluke 732B.

Now calibration of the UUT xDevs.com 792X is complete.

Final assembled reference, ready for use as working standard

Back and side of the unit as fully shielded, just like original Fluke 792A, no alterations made on these sides.

This DC reference is constantly powered after assembly on since January 2018.

This reference was calibrated by Taiwan’s National Measurements Institute in August 2019 . NIST SRI6000 PJVS system was used as a primary traceable reference during that key calibration.

Here we have all list of traceable calibrations to other references of similar grade, and estimate annual stability of finished 792X project.