While GPIB interface is slowly replaced by USB, LAN and other less popular modern interfaces, lot of instrumentation are still rely on GPIB as industry standard. Majority of production systems and automated measurements setups using GPIB for decades already. All these usually require a host GPIB controller to run program and issue operations over the bus.

Using PC is easiest thing, especially Windows-based machines, as most of vendors already supply ready to use libraries and packages to interface their instruments via GPIB. But if you go little aside, using Linux-based OS, things get tricky very quick, especially for engineers who are not familiar of *nix environment and way of things. Often simple plugging GPIB adapter into system and expecting things to work cause havoc and countless hours wasted, resolving dependencies, compiling pieces of code, tweaking kernels and such.

Redistribution and use of this article or any images or files referenced in it, in source and binary forms, with or without modification, are permitted provided that the following conditions are met:

All information posted here is hosted just for education purposes only and provided AS IS. In no event shall the author, National Instruments, Raspberry Pi foundation, or any other 3rd party be liable for any special, direct, indirect, or consequential damages or any damages whatsoever resulting from loss of use, data or profits, whether in an action of contract, negligence or other tortuous action, arising out of or in connection with the use or performance of information published here.

First, let’s take a look on hardware interface which we will be using in this tutorial.
There are multiple versions of USB-GPIB interfaces from National Instruments, we use previous generation GPIB-USB-HS. There is already newer version available, GPIB-USB-HS+ for about same price ~600 USD new.

While NI site lists Linux support, it’s declared only for RedHat, Scientific Linux and SUSE. If we want use it with something like Raspberry Pi with it’s Debian-based Linux system we are alone in the wild. 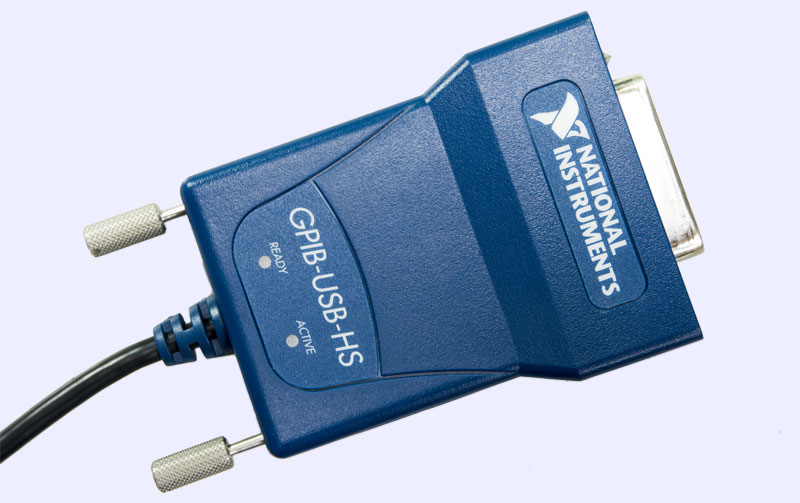 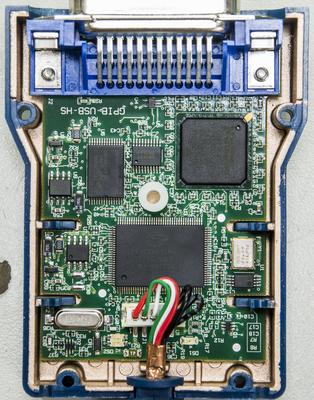 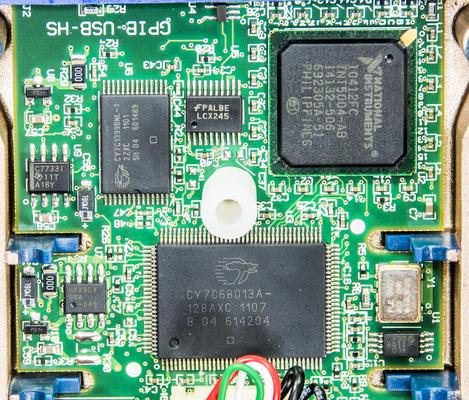 Main micro-controller to interface USB side is Cypress CY7C68013A, which is EZ-USB® FX2LP™ USB Microcontroller High-Speed USB Peripheral Controller based on 8051.

GPIB side is served by own National Instruments ASIC, TNT5004-AB, which is GPIB Controller with PCI and Generic interfaces. It’s documentation is subject of NDA, but there is public datasheet for GPIB talker/listener only version TNT5002-AB, which brings light to most ASIC’s inner structure. Cypress CY7C1399BN is just 256-Kbit (32K x 8) SRAM to store realtime data during transfers. System clock is generated by 40 MHz generator. 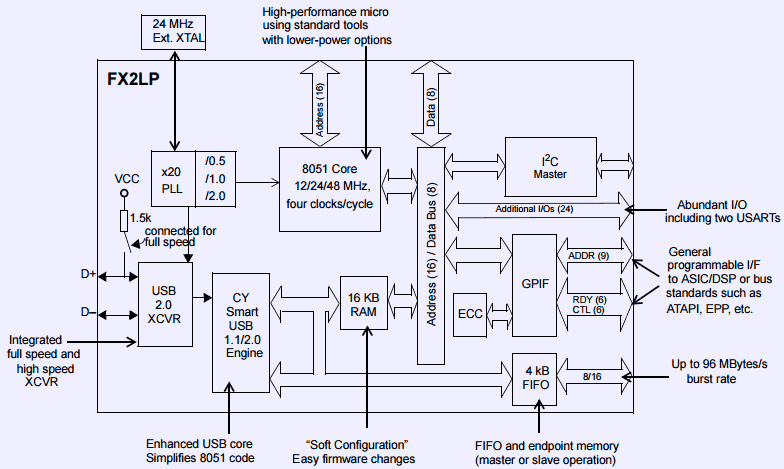 There are also Texas Instruments TLC7733I and Maxim MAX804CSA supervisors, and few other small logic chips. No parts are populated on PCB’s bottom side. 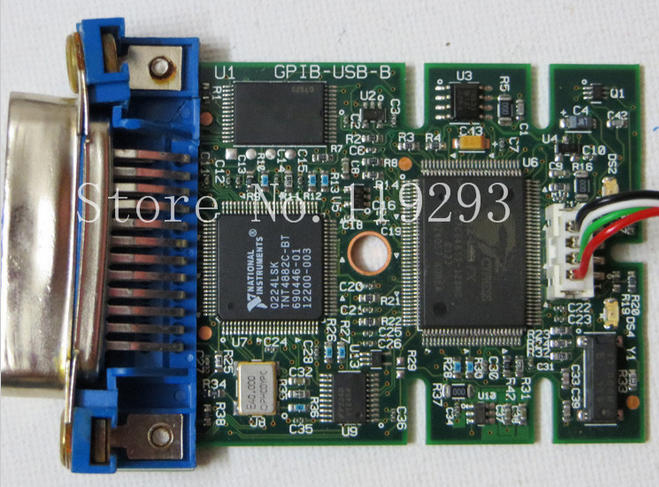 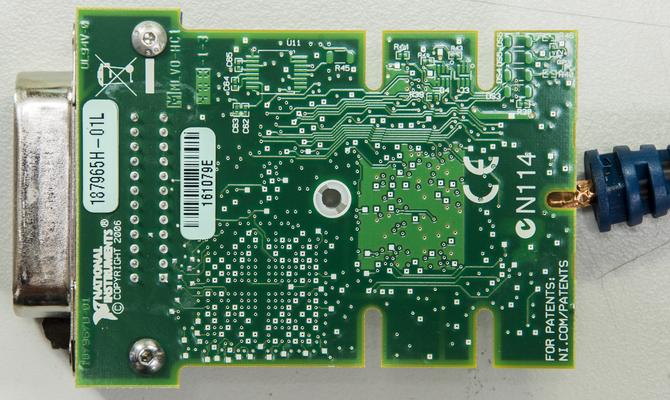 Enough hardware, let’s dig into Linux world to set everything up and try talking some instruments.

For easy installation please use automated script installer listed below. It is designed to operate with latest Raspberry Pi Image and tested with both NI USB-GPIB-HS and Agilent dongles.

Requirements for this automatic script are:

For BME280 support the thermo_installer.run file should also be copied

The following 3 files should be copied to the SD card /boot directory:

Manual entry of gpib_config command should not be needed after reboot. This is handled automatically now.

Now Pi should have linux-gpib operational and GPIB communications can be tested with ibtest utility.

Obsolete manual setup procedure, do not use together with automated script

We already went through basic setup doing I2C stuff on RPi before, in this article. If you need to setup system from scratch on blank SD card, suggest to reference that article first.

Below we go step by step for whole process of getting GPIB-USB-HS working with Raspberry Pi system. Forum thread on EEVBlog.com from member bingo600 was a great help, and definitely saved loads of time and efforts. While he was using Beiming S82357 and Agilent 82357B, but idea behind flow is exactly same. If you have one of those, be sure to check out Agilent-version of this article

rpi-source also require bc and bison packages on the system, if it’s not installed, you would need to do so by running apt-get install bc bison.

This operation take about 5 minutes, so you can go make some coffee/tea to spare waiting.

Install gcc 4.9 or other version, depends on what is requested on ERROR message above.

Used gcc version can be changed by running

bc package also required, it can be installed by apt-get install bc. After this rpi-source should execute to get kernel stuff done.

After this libraries and additional packages can be installed:

Now install linux-gpib itself. Enter home directory and run next:

This will take some time. After this step do make install

These steps must complete without errors in the end. Also may be worth to run ldconfig to link all installed libraries

Configuration for linux-gpib and interfacing

After everything successfully installed without errors, let’s connect GPIB-USB-HS adapter to Raspberry Pi and try to talk with it.

Make sure your Pi powered with good short high-current USB cable and +5 VDC power supply with at least 2 Amp , as NI GPIB-USB-HS is taking some decent amount of power and with cheap USB cable connected to PC port it was causing unstable operation, LAN LEDs on Pi were blinking like crazy and nothing worked, as voltage drop too much.

Unlike old GPIB-USB-B, which need Cypress FX firmware upload every time after connection, GPIB-USB-HS does not need any firmware uploads and ready to work right from the box.

Should be no error messages here. Can check if module was correctly used as well by lsmod.

Now I tried using gpib_config tool to test operation, but got nasty error instead:

Oops… After some amount of trial and error, and googling similar issues on web, answer is simple: this is due to actual driver called different name compared to kernel module. In our case driver for NI GPIB-USB-HS need to be properly selected in interface block, so related configuration on /etc/gpib.conf should follow next example:

You also may get error on RPI2, like shown below

To fix this, just execute command ldconfig before gpib_config.

No error messages, yay! Let’s test how it works now.

You may want to add /usr/local/sbin/gpib_config into /etc/rc.local to have it executed automatically during Raspberry Pi boot, if it is not done automatically.

To test I had NI GPIB-USB-HS connected to Fluke 5720A. Instrument is configured with GPIB Address = 1 in this example below.

Now we can confirm that interface is working, and data send/received correctly.

It’s time to write some simple program to talk with our instruments over GPIB.
One of easy choices would be using Python, as this high-level language is very easy to write data-logging programs and format data, without worry much about low-level coding.

To use GPIB in Python we need to have python-dev library installed and working:

Python-dev library is needed to access GPIB module.
Now we can install python egg to include Gpib module with our python system environment:

Simple Python test can help to check access, for multimeter sitting on GPIB bus with address 17. Test is simple sending IDN? request and reading back 100 bytes:

Hope this article help to use little, but mighty Raspberry Pi with industry standard GPIB instrumentation. Size and capabilities of small microcomputer, such as Raspberry Pi can make something wild possible, such as integrating it into old GPIB-interfaced instruments to bring modern computing power and interfacing, such as interactive web via LAN port or even having instrument on remote location, controlled thru Internet. No need big bulky computer with Windows tied to it.

Here’s another app example, to setup and read data from HP 3458A multimeter

One of our readers also mentioned possibility of using LXI-compatible instruments with Raspberry Pi.

To use this simple guideline can be followed. Create folder (for example /home/LXI).

Enter directory and get SVN repository for python-vxi

Now python-vxi should be installed on your Raspberry Pi

In case of correct installation and connection reply can be as below:

More information is available on github for python-vxi11 or Alex Forencich’s site
He also had created python-usbtmc for Python USB commnication with instruments, so check it out.

Recently one of dongles I had stopped working. When attempted to use with linux-gpib software in Raspberry Pi environment it just returned “OS Errors”. In Windows-based system dongle was properly detected at first as NI USB-GPIB-HS interface but few seconds driver reported failure with “device cannot start or the driver is missing”. 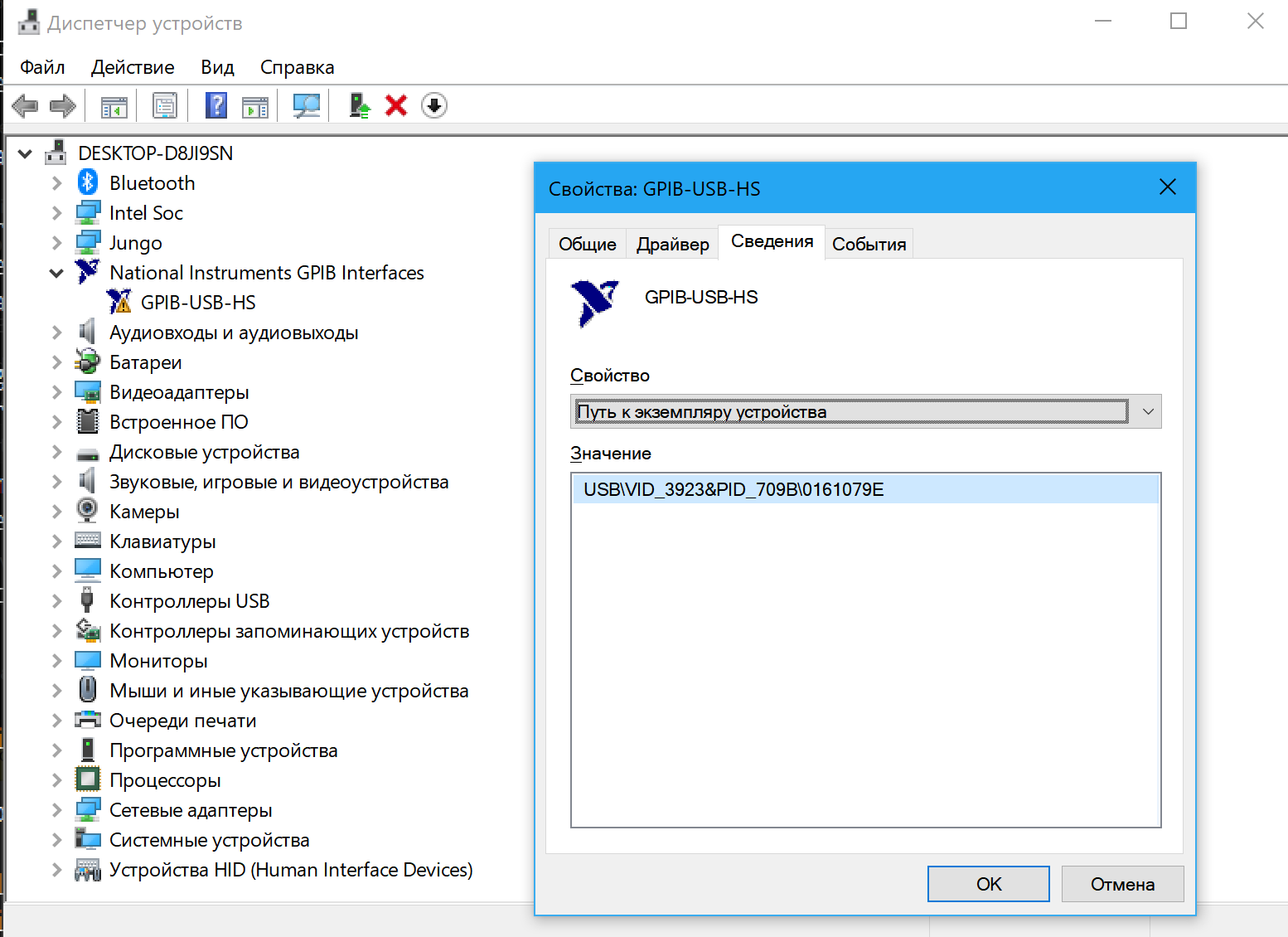 Another USB-GPIB-HS dongle was operating just fine in same Linux/Windows environment. So now that I have confirmed that it is a dongle hardware issue, time to take one apart and do some troubleshooting.

I have checked power rails on a dongle. Both +3.3V and +5V were OK, and current draw of the dongle was matching other good dongle within few percent. Next suspect – I2C EEPROM corruption. 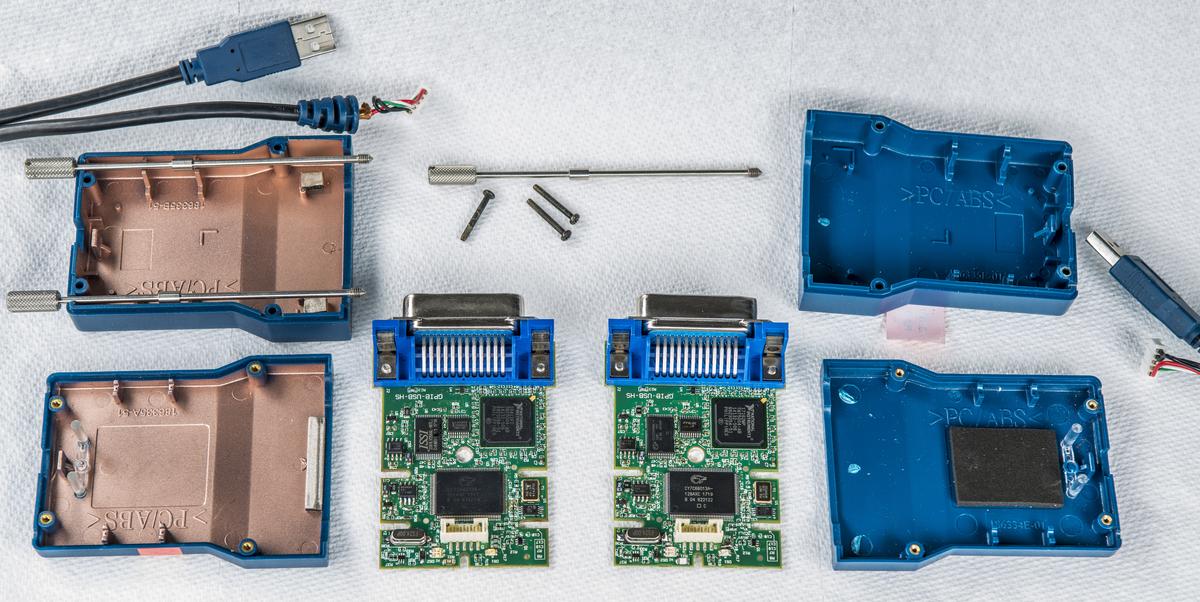 I was not alone with such problem, some users from EEVBlog forum also reported issues with EEPROM on these dongles. Forum member issue was however bit different device was detected as USB\VID_04B4&PID_8613 which are default Cypress USB 2 development kit IDs and not the NI USB-GPIB-HS.

Either way Microchip 24LC256 I2C EEPROM contents was dumped from the good dongle, written into bad dongle, but this rendered my bad dongle not even detect properly. Instead it blinked green LED few times and then was presented as Unknown USB device.

At this point dongle was sitting on a shelf, until I got another dead dongle from Nikonoid. His dongle was plain dead, not detecting by computer and no any LED activity at all. R10 and R19 0 ohm 0603 size SMT-resistors on his dongle were burned to crisp. For comparison, Nikonoid’s dongle PCB is on the right side in the next photo. 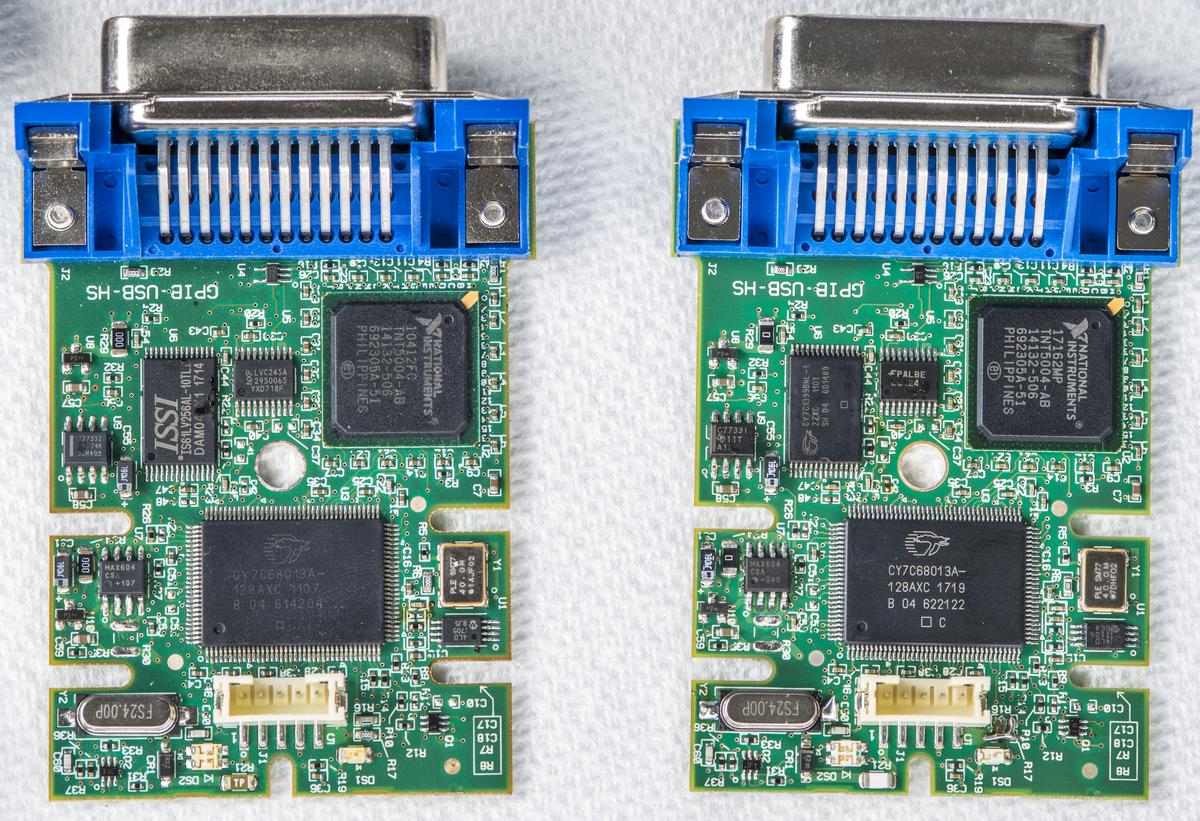 R21 is a polyfuse on main +5V entry from USB cable. It was OK, no problems with power here. +3.3V rail however is loaded down. It is regulated by MAXIM MAX604CSA linear regulator. Good dongle measured DC resistance +3.3V to ground around 50 kΩ while this bad dongle reported 300 Ω. When powered +3.3V rail was drawing 45mA or so, with correct +3.3V.

I didn’t want to spend too much time with these (you can buy one of the knock-off USB-GPIB-HS dongles from ePay for $100 or less USD). There is no help from vendor, lack of schematics and it is 4-layer PCB. Next just things I tried to do, swapping parts between my “Unknown Device” and this brain-dead dongle in timelog sequence:

I did not immediately suspect bad SRAM chip, but it was not totally impossible. Perhaps rogue cosmic ray shoot thru some capacitors inside SRAM array and killed it :).

Dongle with loaded down +3.3V rail still have problem, perhaps it is bad cracked capacitor somewhere or damaged USB microcontroller Cypress CY7C68013A or even worse, bad BGA NI TNT5004-AB chip. I might continue troubleshooting for this dongle in future, but for now its going back on shelf.

Hopefully this repair worklog can help somebody who may have broken NI USB-GPIB-HS.

Sometimes during long-term data logging USB dongle may hicckup and hang up. When this happens gpib_config command will refuse to work and throw errors. Any communications via linux-gpib or Python apps would not work either.

One of local solution is to unplug and plug dongle back into RPi host. But if logging done remotely without physical access to hardware, alternative solution required.

In case of NI GPIB dongle, command to reset dongle would be next:

This sucessfully tested and confirmed working on Raspberry Pi 4B host.
Article version:

If you have any comments and suggestions – feel free to join in comments!