In instrumentation and sensor/analog design stability of used electronic components can depend on many factors. Key factors can be such as power, temperature, pressure and humidity. One of most visible effects is related to temperature, as every component has specified operational range of temperatures, and lot of electrical circuit properties change with actual temperature. Even simple passive component, such as resistor is affected by temperature. Higher temperature makes electrons move with different speed, making total resistance change. Rate of this change per fixed temperature value is called temperature coefficient of resistance.

Metal alloys can have overall TCR very close to zero, meaning that the resistance stays stable within specific temperature variation. However overall TCR still depends a lot on construction of resistor, used packaging method and even resistance element shape and terminal configuration. Even stress introduced to precision resistance wire can make otherwise stable resistance become mediocre due to thermal coefficient. Making resistor trimmed some specific value, let’s say 10.00000 KΩ is not that difficult, but making same resistor with very low temperature coefficient and long-term stability is much bigger and expensive challenge.

Redistribution and use of this article or any images or files referenced in it, in source and binary forms, with or without modification, are permitted provided that the following conditions are met:

All information posted here is hosted just for education purposes and provided AS IS. In no event shall the author, xDevs.com site, or any other 3rd party, be liable for any special, direct, indirect, or consequential damages or any damages whatsoever resulting from loss of use, data or profits, whether in an action of contract, negligence or other tortuous action, arising out of or in connection with the use or performance of information published here.

If you willing to contribute or add your experience regarding resistance measurements or provide extra feedback, you can do so following these simple instructions

Good analog electronics designers who need accurate signal processing must pay attention to resistor temperature coefficient, and often this value is more important then resistance accuracy tolerance itself. And since better TCR resistors (more stable ones) are usually also much more expensive, it’s important to know and be able to measure TCR. This allow to calculate error budget of design and factor in possible resistance variations, to ensure circuit is working correctly under possible temperature variation.

Resistor manufacturers are often use great lengths of specmanship in their datasheets. Specmanship here referred to careful wording of performance specifications, to give false expectations of better performance that really achievable/measureable in real world application. There are some ways to detect specmanship, like use of terms “typical” or “usual”. “Typical” or “best” specifications may provide some information, but these values offer no guarantee that the resistor you buy is anyhow “typical” or even capable of providing the “best” performance as listed. Also “typical” does not indicate of test conditions or period when measurements were taken.

Here is just one fine example of what is meant by smart specmanship, listed in datasheet of very good and expensive Vishay Precision Group VHP203, which is hermetically sealed precision resistor.

We are welcomed by big eye-catching title promising us TCR of 0.05 ppm/°C, with bold underlined text. Hard to miss that one, where do we insert money to get it?
Note, there is no “Typical” or “best” word used either, leading us to assumption that all resistors have 0.05 ppm/°C performance. Maybe more fine text reveals worse specification for TCR? 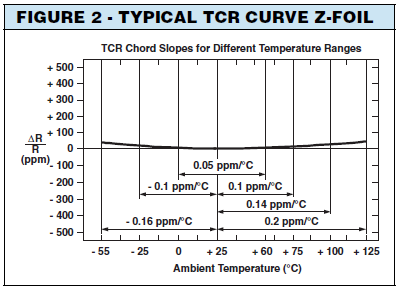 Still according to graph performance is stellar, worsening just to little +0.2 ppm/°C over +25 °C to +125 °C range. Here we catch first time mention of “Typical” however. Not a word how typical is the result across the random batch. Is it performance of one resistor out of 100? Or the median value out of 1000 resistors? Very interesting.

Resistors that were aged or conditioned before measurement can also show better results, but that will not indicate out of the box brand new resistor performance by any means. For precision designs and calibration applications, only worst-case or guaranteed performance maximum specifications are required that include all natural variations in the product. 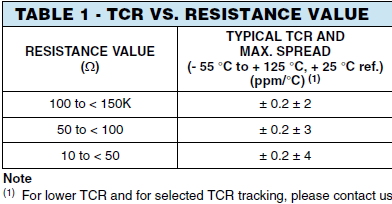 And only little Table 1 (give the VPG credit, it is shown on first page though) does reveal desired maximum TCR range. For main range of resistance values from 100 Ω to 150 KΩ we have MAX SPREAD value for TCR, which is ±2.0 ppm, added to “Typical TCR”. So in worst case random VHP203 resistor will have temperature coefficient at -2.2 ppm/°C or +2.2 ppm/°C and it will be still in manufacturer spec. You will not find this number however anywhere else in the model title or marketing documentation info from the VPG. If you really want guaranteed ±0.05 ppm/°C there is friendly note to contact VPG. Be sure to prepare the bank account, because while you may want just one resistor, you will pay for all batch to make for selection of the low-TCR resistor unit.

During work on this article, specific resistance elements were evaluated under specific conditions and equipment we have in reach. It would take extensive and time-consuming engineering analysis (and whole lot more expensive samples) to make accurate predictions of performance margins, that could be in theory applied to all units being produced. However data required for such rely on deep understanding of proprietary process involved in manufacturing, testing and packaging of the resistors, and only manufacturer has access to such information. Unless you are major player on the market that order thousands of resistors every month, it is very unlikely to ever get that kind of actual data over the large enough sample set.

Use numbers from this article only as indicative measure, to get ball-park figures and methodology that engineer could use to perform quality control and testing of resistance element thermal stability. Equipment used to collect the measurement samples is verified and calibrated against traceable resistance standards, but uncertainty and application of data to real-world use case scenario was not evaluated.

This study is also shows measured performance only of the units that we actually tested. These results cannot be used to determine performance of entire population of the resistors, even of the same model and manufacturing date.

When resistors are subjected to different voltages/currents, PCB assembly thermal gradients and soldering stresses was accounted for. Temperature coefficient result on resistor with 100 µA current does not mean that same result can apply at lower and/or higher working currents. 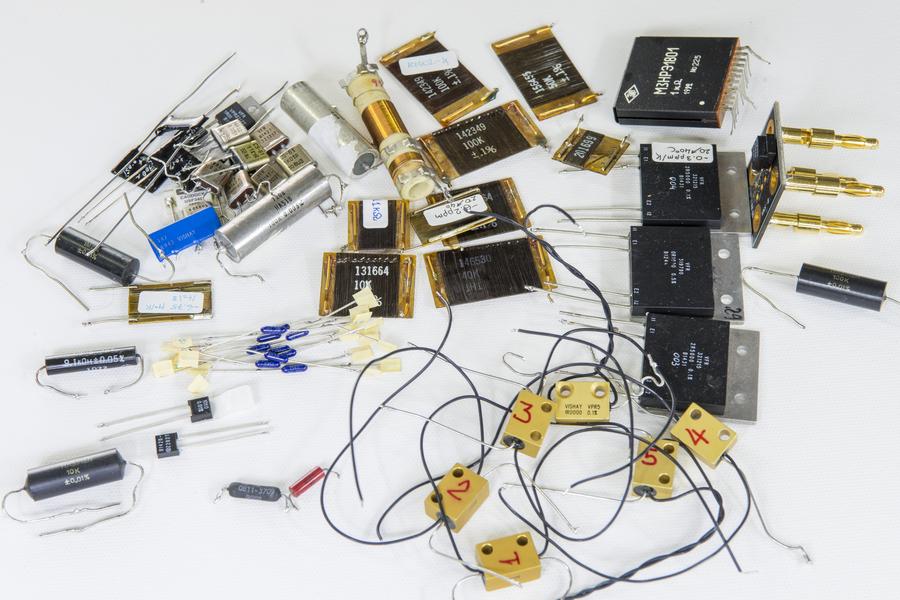 We will need stable resistance meter, temperature controller with little “oven” box and some Raspberry Pi software to automate the measurements. Often simple estimation of temperature coefficient can be made by measuring resistance on two points (low temperature, high temperature), but this may lead to inaccurate results due to non-linear resistance changes.

So to do accurate temperature coefficient measurement slow temperature change speed over extended range is required. If resistor under test cooled or heated too fast thermal gradients may develop stress and cause larger resistance change compared to temperature coefficient change itself. Large wire-wound and large value resistors are especially sensitive in this respect. This speed is also sets overall temperature ramp test time, and can become multiple hours long. Test software app developed for this study tests each resistor for duration of 15-30 hours. Having 130 resistors to test that would mean three months of continuous testing, if we use just single ohm-meter.

To speed up testing multiple separate multimeters were used, with test resistors individually connected. Initial test runs were using three calibrated long-scale DMMs (HP 3458A, K2002-4 and K2002-6). Use of high performance DMM in stable environment is important, to ensure minimal error from meter drift/own tempco. Later test runs had forth calibrated HP 3458A added in the mix. Even better method would be using stable current source to drive test resistors and sensitive voltmeter. This setup will be used to measure tempco of low value resistors, such as 50 mΩ and 10 mΩ 4-terminal shunts. Lowest range of used DMMs (10 Ω in case of HP 3458A) lacks of required stability and too noisy for ppm-level temperature coefficients of such low resistances.

Each resistor under test was quickly (to reduce thermal stress of resistor element itself) soldered to twisted AWG34 test copper 4-wire cable. Other end is directly connected to DMM inputs in 4W configuration (except ranges >10MΩ, where 2 wires only are used). If resistor have four terminals, sense line connected separately to dedicated pins. Otherwise both sides tied as resistor sides. 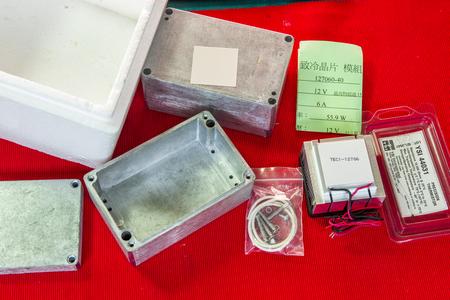 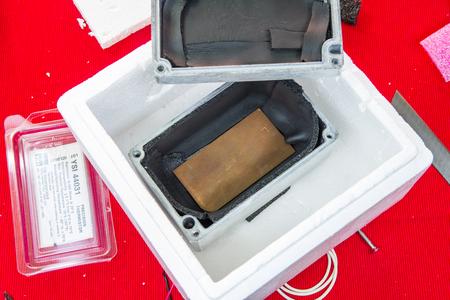 Few mm thick copper plate added on the bottom of the chamber as thermal damper, with thermistor mounted in center. Thermal grease was used to enhance surface contact and provide good thermal coupling of sensor with metal slug to minimize self-heating and readings noise. Make sure you don’t subject sensitive thermistor to temperatures over +75°C and use heatsinking during leads soldering.

Image 5: Thermistor mounted to a plate

Such simple yet effective setup allow to set and stabilize any temperature from +5°C to about +70°C with precision better than 0.05°C. Insulation required to reduce heat loss and influence of ambient temperature change on internal box temperature. This means that we will spend less power to adjust and maintain set temperature in the box. 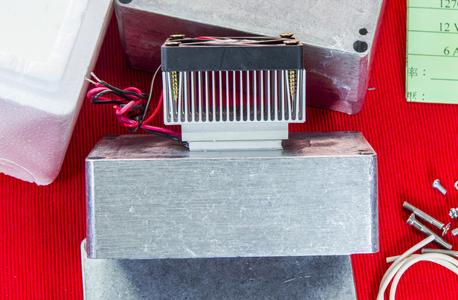 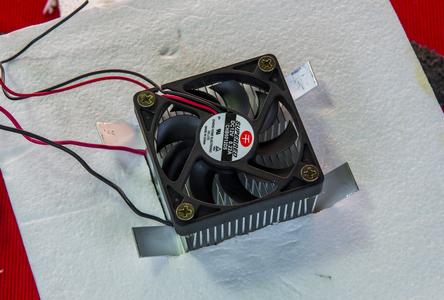 All instruments like DMMs and Keithley 2510 are remotely controlled by simple Python application, running on Terasic DE1-SoC board (or Raspberry Pi 3). Actual physical interface is GPIB, with linux-gpib as software framework. We have actual guides covering setup both popular NI GPIB-USB-HS and Agilent 82357B dongles with linux-gpib. 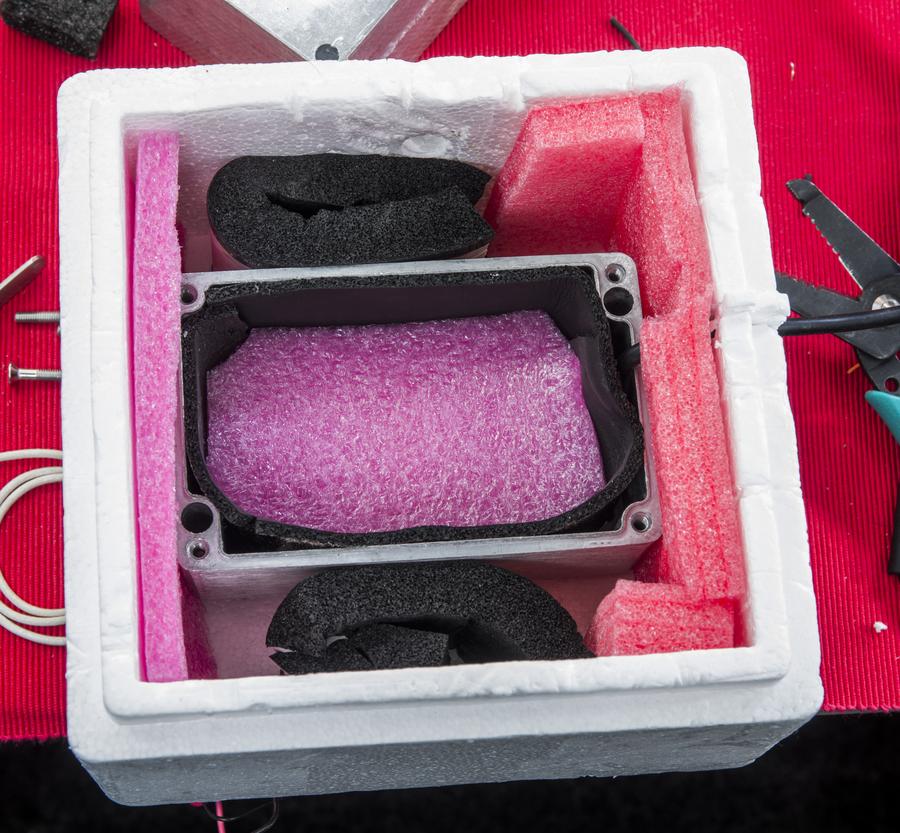 Environment conditions such as ambient temperature, humidity and pressure are also logged at every sample, with help of Bosch BME280 I2C sensor. Here’s the guide setting it up with Python in linux.

Actual test starts from configuring all meters to proper range, setting 3458A’s to NPLC 100 speed, AZERO on, OCOMP ON and Keithley 2002s to equivalent settings with NPLC 30. Meters then sampled in sequence, and box sensor temperature, TEC current are read from Keithley 2510. Each 20 samples (equals about 30 minutes of time) setpoint temperature increased by +0.1 °C. After reaching +40.0 °C ramp down sequence with same speed executed to bring box temperature down to +20 °C. This allow to also confirm symmetric temperature coefficient in both directions while heating or cooling resistor under test.

Coefficients A,B,C are taken from actual sensor datasheet, and PID values are tweaked to work on my specific thermal box setup, shown above in this article. Let’s take a look on Keithley 2002’s config:

This code uses counter for timespan, with data collected from meters on each count, and temperature configured on each 10th count. First 100 counts code runs with fixed 20 °C setpoint, to obtain our reference point readings, used as 0.0 ppm calculation reference. This is our start. Next step is to increase temperature setting at +0.1 °C increments by programming Keithley 2510 SMU.

Once temperature reaches +40.0 °C code will keep this temperature level for another 50 samples, to ensure resistors under test are stable. Next is ramp down in -0.1 °C change till reach of final value +20.0 °C. Ramp down data used on some resistors tests, to confirm accurate and uniform results, so it’s not used on every case. 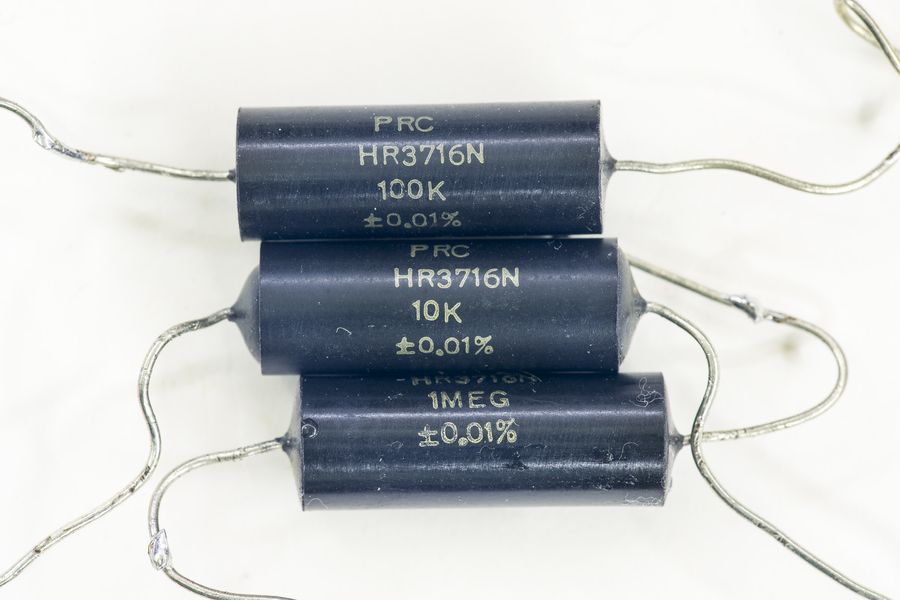 Data DSVs:
Ramp up
Ramp down 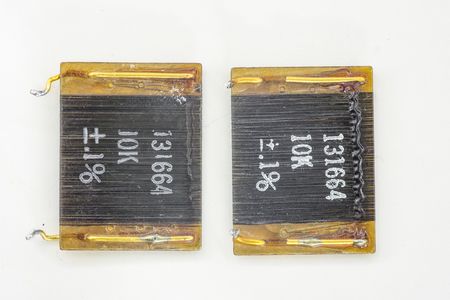 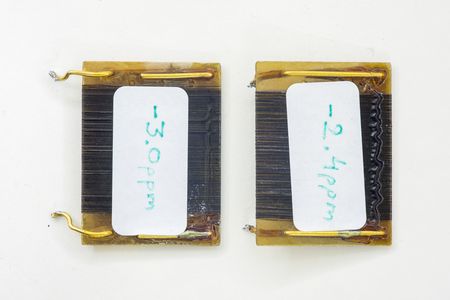 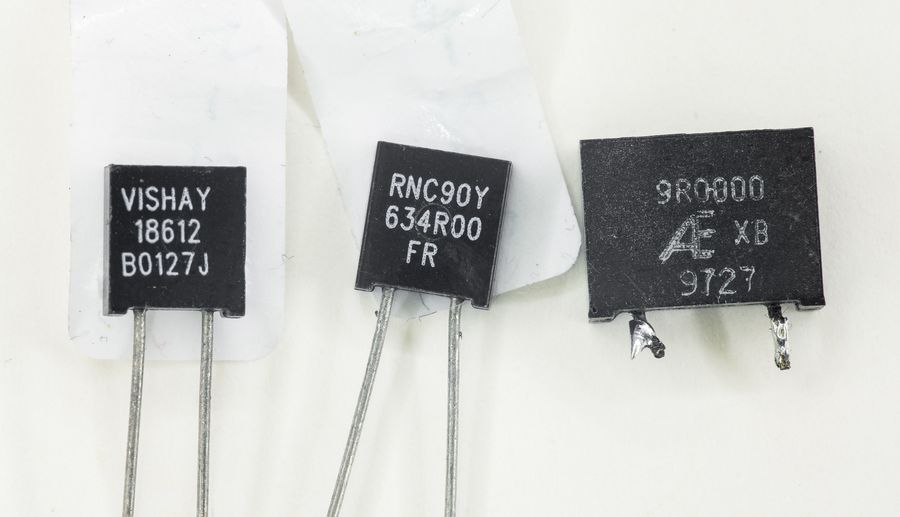 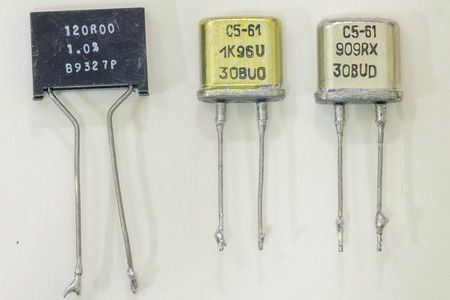 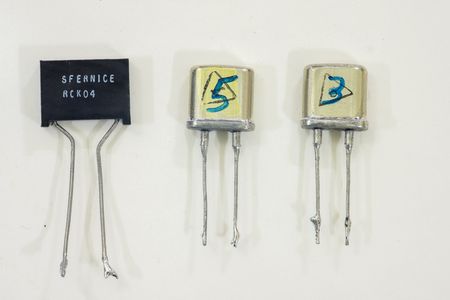 Datalog – tweaked snake so it ramps 0.1c/4 minutes to give smooth nice ramp. 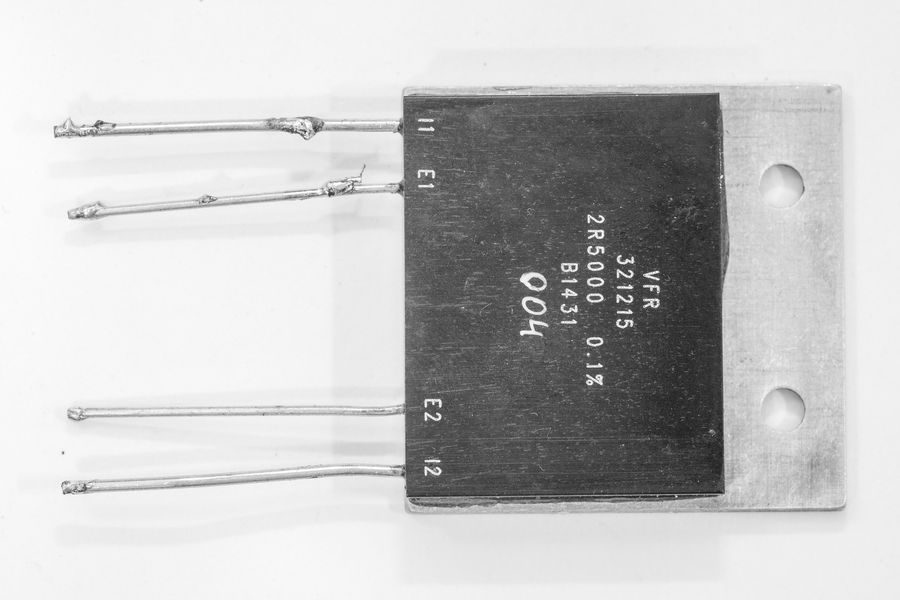 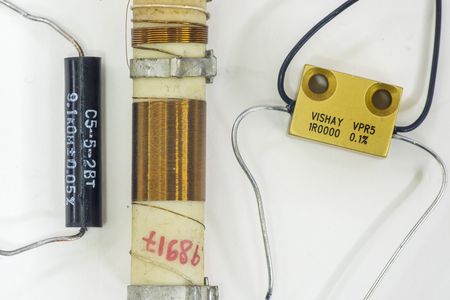 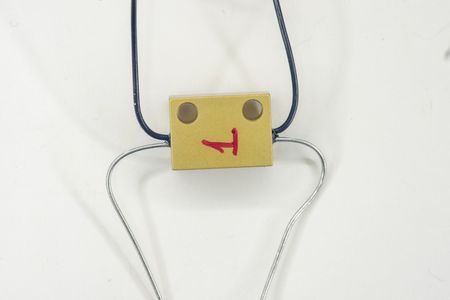 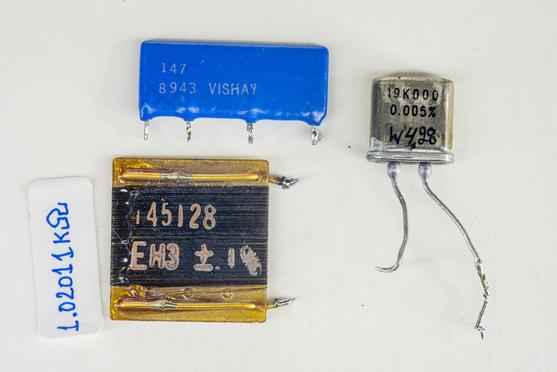 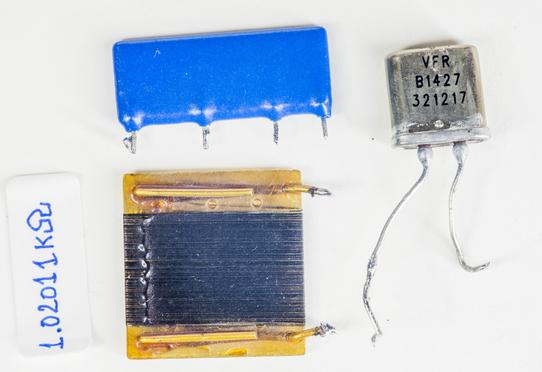 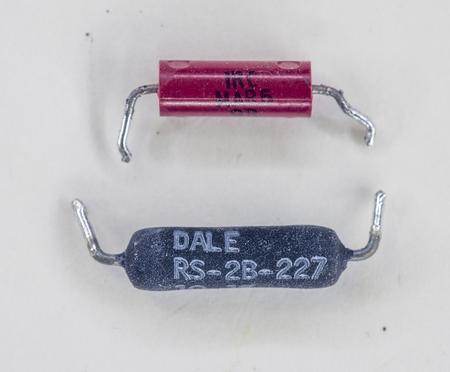 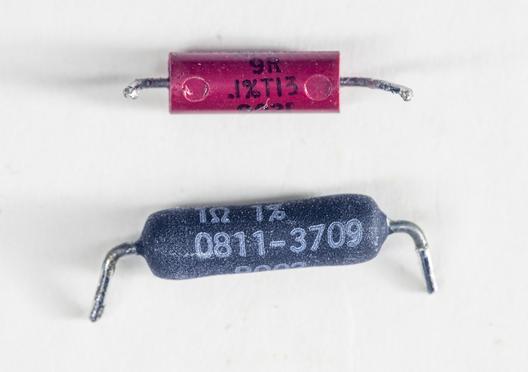 Each resistor test result can be viewed by clicking on ppm/K value link, which leads to separate page with graph and DSV-datalog file. Photo of each specimen also presented for overview. 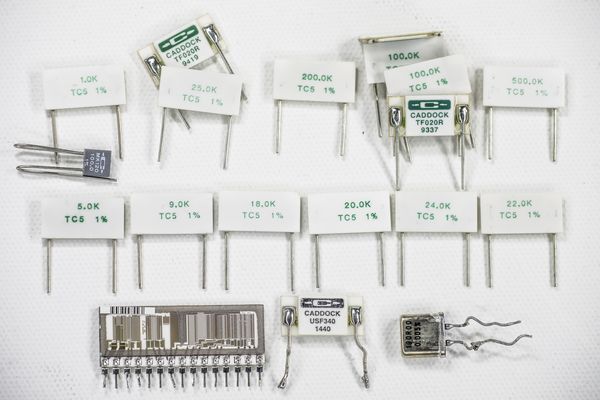 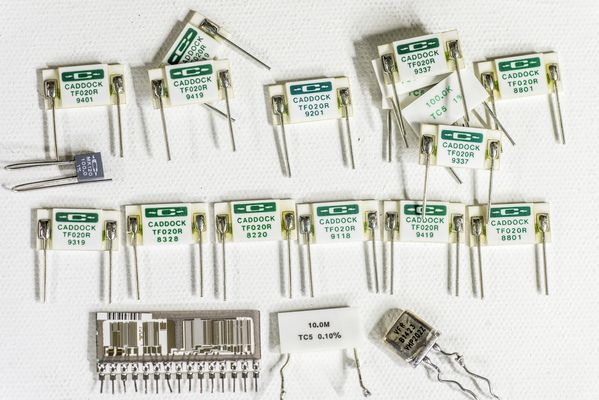 And now same data, sorted by resistance temperature coefficient, and per resistor type. 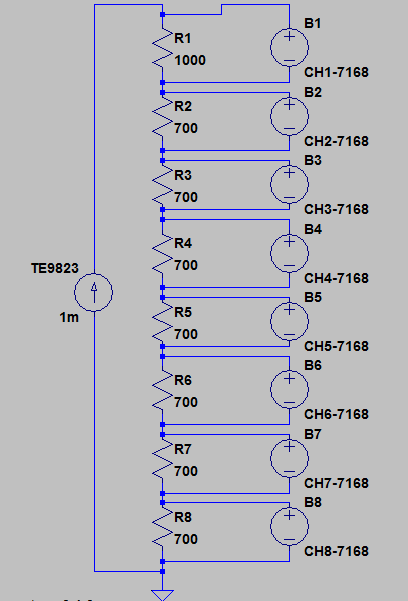 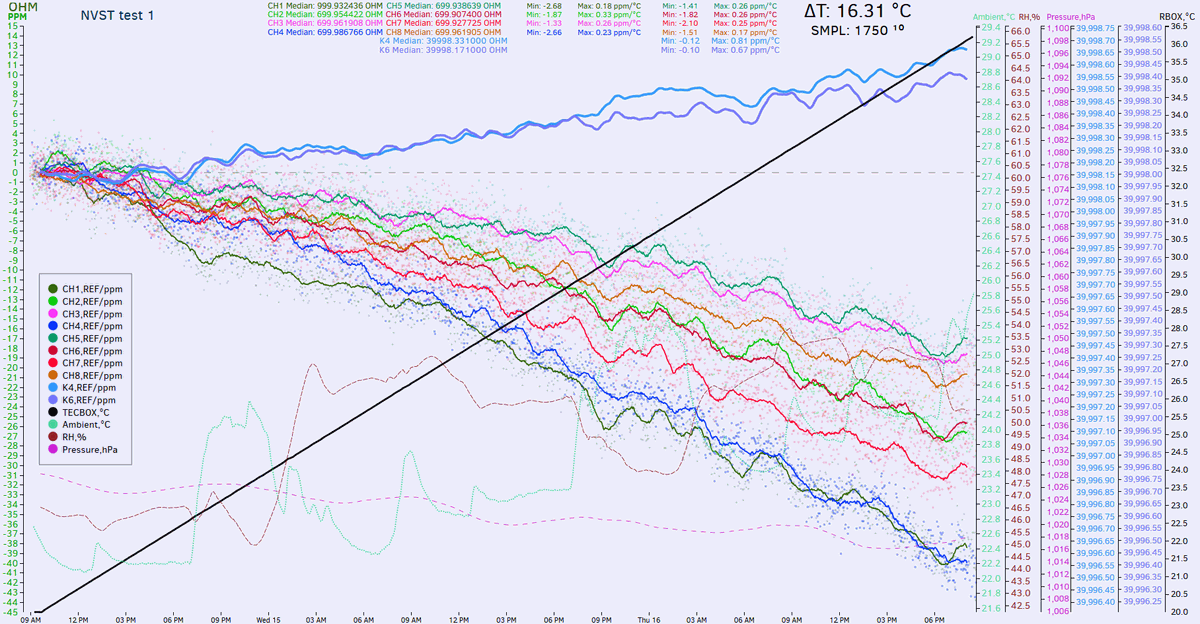 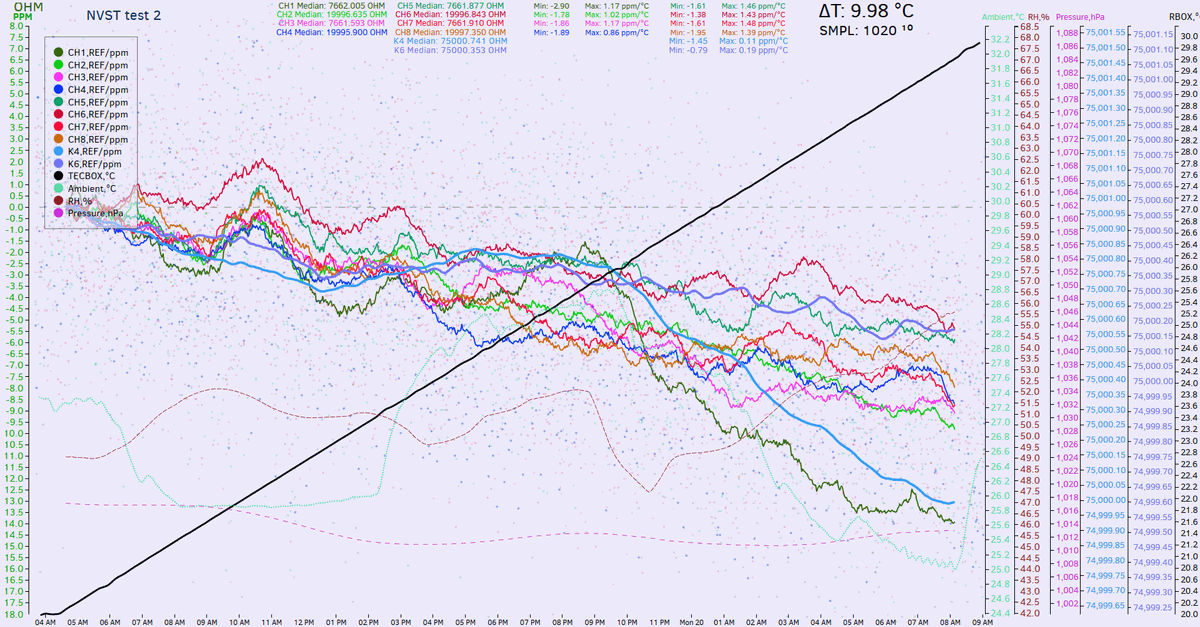 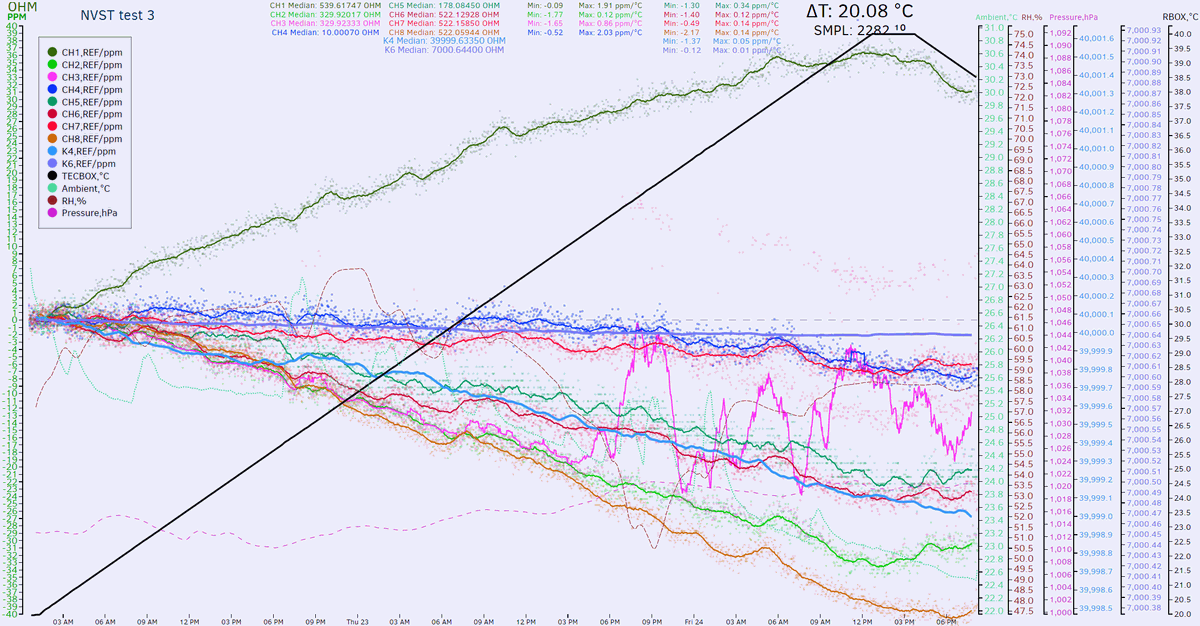 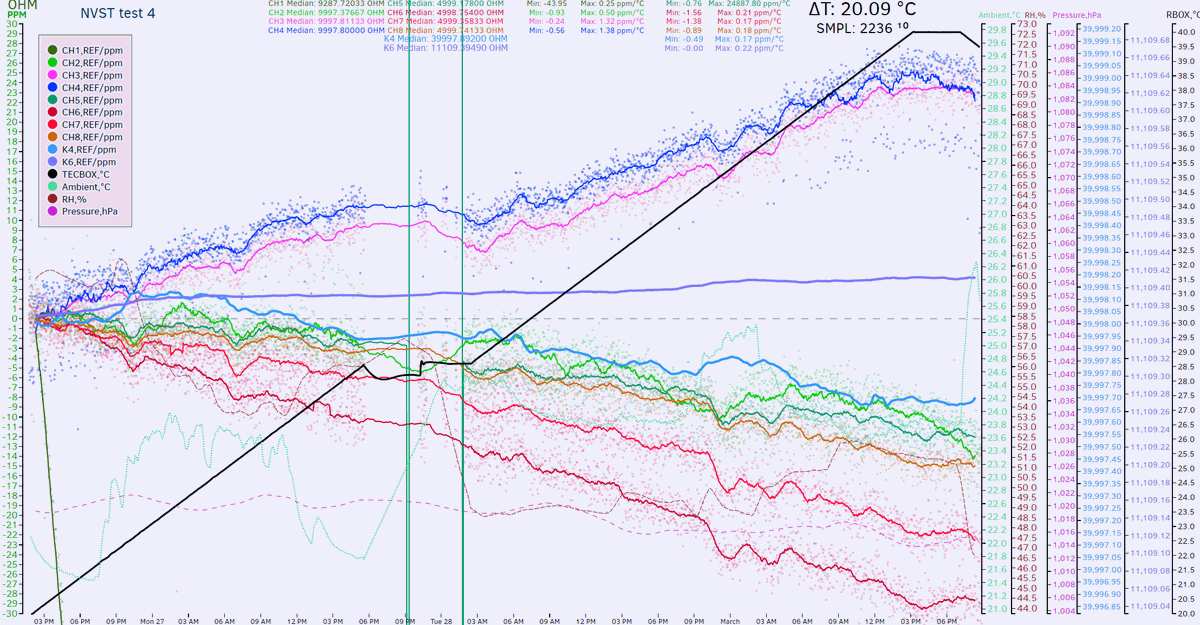 This study was a good introduction to resistor characterization, and we will be working to further improve accuracy, speed and test procedure for future temperature stability measurements. Stay tuned!

I would like to express my gratitude and appreciation to supporters of this project: Todd, pipelie and EEVBlog forums community and of course all our readers. Stay tuned, many more interesting things will be published soon.

Discussion about this article and related stuff is welcome in comment section or at our own IRC chat server: irc.xdevs.com (standard port 6667, channel: #xDevs.com). Web-interface for access mirrored on this page.